In Brazil’s First Elections Under Bolsonaro, Black Women are Fighting Back

Amidst violence and COVID-19 restrictions, Black women in Brazil are mobilizing to win seats in the November 15th municipal elections and open the gateway to electoral power. Brazil ranks 132nd out of 192 countries in women’s representation. 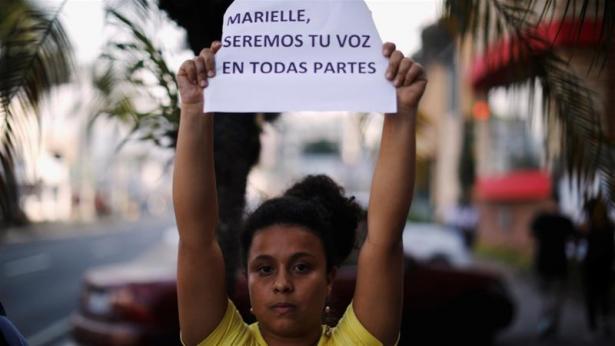 Brazilians protest the 2018 murder of Rio de Janeiro City Councilor Marielle Franco. The sign reads: 'Marielle, we will be your voice everywhere.' The rise in Black women candidates is part of the effort that began in response to Franco’s murder., Jose Cabezas/Reuters

“When she was murdered, the Black women’s movement dealt with this collective trauma by turning it into institutional political action,” says Ana Carolina Lourenço, co-founder of Mulheres Negras Decidem (Black Women Decide). She is referring to Marielle Franco, the Black, queer Rio de Janeiro councilwoman and an outspoken critic of police brutality, who was assassinated before Brazil’s 2018 general election.

Worldwide, Brazil ranks joint 132nd out of 192 countries in terms of women’s representation in legislative bodies, lagging behind most of its regional neighbours. At the local level, only 12% of city halls are run by women, and Black women – who make up 27% of the Brazilian population – govern only 3% of municipalities.

But more than 1,000 Black women all over Brazil raised their hands to run for office following Franco’s murder in 2018, a 60% increase on the previous election cycle in 2014. Even the increase in the number of women candidates today is seen as part of the mobilisation that started in response to Franco’s murder.

Mulheres Negras Decidem, a collective created in 2018 to raise the profile of Black women candidates and to create and present data about the challenges confronting Black women in politics, gained momentum as part of this movement.

Lourenço traces the wave of Black women involved in politics back to the formative decades of the 1990s and the start of the 2000s. Through affirmative action, Black women started to access universities, and many gained experience in government when the Workers’ Party was in power between 2003 and 2016.

As a result, more women candidates than ever, including Black women, are set to contest municipal elections this month – the first elections since President Bolsonaro took power. These women are braving violence, and opposition from the mostly all-male conservative parties who still rule Brazil.

For Taina Rosa, running for city council in Belo Horizonte, capital of the south-eastern state of Minas de Gerais, it all started last year at the iconic Ocupa Politica gathering. There, she met a number of prominent women involved in politics and “instantly decided I wanted to be part of this movement of Black women occupying politics,” she recalls.

“That same day, I talked to Lauana and we created Mulheres Negras Sim (Yes to Black Women).”

Lauana Nara is her political partner in this ‘collective candidacy’.

“We chose this name deliberately to emphasise a ‘yes’ to life in view of the many murders of Black women, and a ‘yes’ to our presence in the spaces of power from which we have always been excluded,” explained Rosa.

First adopted in 2016, collective candidacies like that of Mulheres Negras Sim have transformed Brazil’s political landscape, so that it is more representative of the country’s racial mix and includes more women. The concept is simple. A group of people with a common goal run together for the same seat. If elected, one of the members serves as the official representative, but the group makes decisions together.

Inspired by the experience of successful collectives such as Juntas in Recife and Bancada Ativista in São Paulo, this approach was the obvious choice for Rosa.

“I never thought of adopting another model,” she said. “My experience in politics has always been one of solidarity. In order to make our demands, we join forces.”

“Lauana and I intend to run a campaign that involves dialogue and brings politics close to the people,” adds Rosa, who describes herself as “a daughter of social and Black movements from the favelas, and a product of affirmative action”.

Their campaign promises include combating institutional racism, distributing resources fairly to reach the poorest people, and investigating the murders of Black youth in marginalised neighbourhoods. They also promise to do more to address the rampant gender-based violence during the pandemic and to create 24-hour childcare to support women who are left at home with their children.

Roberta Eugênio, from the non-profit group Instituto Alziras, which trains women candidates on campaign and communication strategies, as well as how electoral legislation and financing works, says that women have always been engaged in politics.

But their involvement has mostly been in neighbourhood associations, where they have fought for basic sanitation, healthcare, education and childcare. “What we are seeing now is a recognition of, and support for, their formal involvement,” she said.

This year alone, Eugênio has coached almost 2,000 pre-candidates, from a wide spectrum of political parties, on how to run for the position of councillor or mayor in the upcoming elections. Half of the trainees were Black women and many will run for office in some of Brazil’s remotest regions.

Eugênio feared that the impact of COVID-19 would deter women from campaigning, but she was encouraged by the high turnout for her course. “Municipal elections are a gateway for women to access formal politics,” she explained.

“Even if the number of women elected in a few weeks increases by just 1%, 2% or even 3%, which seems like a little, the multiplier effect is big,” she explained. Many more women now have the tools and networks to continue the race until, eventually, they make a breakthrough.

For the last decade, Brazil has required that 30% of each party’s candidates be women, but that has done little to boost the participation of women in state and national legislatures. Parties often ran ‘ghost’ women candidates just to meet the quota and gave them little support or resources.

Another law, passed shortly before the 2018 elections, required parties to allocate at least 30% of taxpayer-financed electoral funds to women. But again, in many instances, parties used women candidacies to siphon money to male candidates.

Ana Carolina Lourenço from Mulheres Negras Decidem notes that quotas for women do not necessarily mean greater inclusion of Black women, who are still the most underrepresented group in Brazilian politics. But she acknowledges that laws passed post-2015 to boost women's political participation have helped to empower women within political parties, and increase accountability and the involvement of civil society.

Ironically, as Black women in politics gain visibility and collect victories, so does Jair Bolsonaro’s anti-rights agenda, which impacts them disproportionately.

“Bolsonaro’s politics and speech clash directly and obviously with the Black women's movement,” said Lourenço. “All the public policies that his government destroys, or enacts, affect our priorities, which include defending human rights as well as mainstreaming race and gender in public policies.”

Violence against women running for office is also on the rise. A few days ago, federal representative, Talíria Petrone, said she had received death threats. “Attacks on women and Black bodies should not be normalised in any context, including in the exercise of parliamentary mandates and in electoral processes,” Petrone said in a statement urging followers to sign an international petition calling for her protection. Since 2017, when she became a council member in the state of Rio de Janeiro at the same time as the late Marielle Franco, Petrone has received regular threats.

A recent study by Instituto Alziras found that violence – along with inadequate funding and lack of visibility in the media – was one of the key factors still keeping women out of politics. “Violence against female political candidates starts with minor provocations, which are considered harmless. And then it escalates,” explained Eugênio.

Training for prospective candidates by women’s groups usually includes advice on online security and what to do if they become victims of different kinds of violence.

Rosa recalls a string of hate and racist messages that appeared in the chat during an online meeting of Mulheres Negras Sim in late September.

“I fear that this direct violence on my body may continue,” she said. “You see, Bolsonaro’s hate policy does not suit us. We need to bring our culture into politics, so that it stops being grey and starts to reflect our population.”

[Bruna Pereira is a feminist anti-racist activist and a founding member of the Feminists for Rights, Equality and Empowerment (FREE) Network. She is the founder and coordinator of Black Women's Study Group at the University of Brasilia, Brazil.  Macarena Aguilar is a women´s rights advocate and a founding member of the FREE Network. Previously she worked for the Association of Women´s Rights in Development (AWID) as Interim Director of Communications and Senior Online Communications Manager. She is the co-founder of Small World Stories and their Digital and Business Development Director.]