“This is most definitely a global issue…We must not allow the call for human rights to be hijacked. Accountability must be part of the justice and democratic system.” 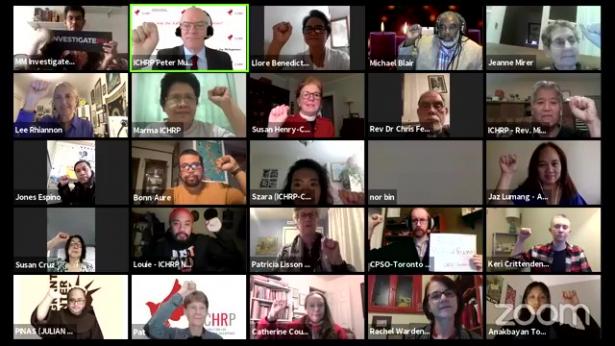 Rights advocates from different countries express solidarity with the Filipino people amid the continuing human rights violations.,Screengrab of InvestigatePH

MANILA – Alarmed at the worsening situation of human rights in the Philippines, church groups, political leaders and members of civil society from different countries launched an international mission, Dec. 17.

The initiative is dubbed as the Independent International Commission of Investigation into Human Rights Violations in the Philippines or Investigate PH. It aims to further substantiate the June 2020 report by the United Nations Office of the High Commissioner for Human Rights. Its members intend to submit the findings to the International Criminal Court (ICC) and to the other relevant UN bodies such as UN Human Rights Council, UN Security Council, the UN General Assembly Special Session.

During the online launch, Lee Rhiannon, former Senator from New South Wales, Australia said several groups from the international community have come together to raise the voice of the Filipino people. She said that what is happening in the Philippines amounts to crimes against humanity and that perpetrators must be held accountable.

“The evidence is overwhelming… one of my lasting memories of my time in Manila is the number of people who said to me, ‘we need your support, we need you and many others to speak out in your country’,” Rhiannon said.

Rhiannon said that human rights violations in the Philippines have been escalating since her last visit in Manila last year.

“This is most definitely a global issue. I do believe that the international community has a responsibility to speak out. We must not allow the call for human rights to be hijacked. Accountability must be part of the justice and democratic system,” she said.

The investigation will also be through a hybrid of virtual and physical fact findings and will cover the period from June 30, 2016 until the end of 2020. Primary sources will be victims, the relatives of the victims, civil society organizations, experts as well as government agencies.

“The world is closed in because the (Human Rights) Council has spoken although it is limited to technical assistance, the special rapporteurs have spoken as well as the EU Parliament. There are moves in the US Congress to pass a bill tying up human rights to military and trade agreements, the EU Council has passed the counterpart Magnitsky Law that will restrict travel and freeze funds of human rights violators and the ICC preliminary report was just released. So despite the difficulties, I think we can go around it because there are many ways and forms to gather information,” Olalia said.

Olalia said that one of the objectives of the investigation is to verify if clear and measurable domestic remedies and mechanisms are available and effective in providing redress and protection against human rights violations.

“The question is, are these domestic remedies genuine, effective and accessible?” Olalia said.

She said that one key indicator that domestic remedies are working is the 100 percent prosecution and conviction of the perpetrators both in the drug war and other cases of human rights violations.

“Of course some would say this is wishful thinking but what do we want as indicators to consider that these domestic mechanisms are working? We need actual results. We want those who are doing the killing on the ground and committing violations to stop what they’re doing,” Palabay said.

She said that the Department of Justice review panel on the drug war, for instance, has not submitted its report the UNHRC last November, a commitment it made before the UN body last June.

According to reports, the DOJ said it will release the report this month, citing the pandemic for the delay.

Olalia said that “token investigations and prosecutions given the gravity and intensity of the violations, will fail in comparison.”

“Claims and allegations cannot measure up with matters of fact and empirical data. One conviction vis-a-vis more than 5,000 killings speaks volumes. The claims of domestic remedies and its availability is always an excuse to take away the focus of bodies from looking into the genuineness, effectiveness and accessibility of these domestic remedies,” he added.

Palabay also added that they want to see the clear outcomes of these mechanisms including DOJ’s Administrative Order No. 35, which created the Inter-Agency Committee On Extra-Legal Killings, Enforced Disappearances, Torture and Other Grave Violations of the Right to Life, Liberty and Security of Persons.

IADL’s Mirer, meanwhile, said that putting pressure to their respective governments to withdraw support from the Philippines is also part of the international solidarity.

“We are hoping to activate all affiliated members to push (worldwide) this kind of activity,” Mirer said.

Rev. Dr. Susan Henry-Crowe, general secretary of General Board of Church & Society, United Methodist Church said they are “supporting the moves of the US Congress to review the official development and trade and economic arrangements to examine if these do or do not further exacerbate human rights violations.”

“We also call for any military appropriations and official development assistance to the Philippine government to be withheld unless it demonstrates strict adherence to international humanitarian law and human rights,” she added.

Meanwhile, Rev. Dr. Chris Ferguson, General Secretary of World Communion of Reformed Churches said that the outcome of the investigation is also a “deeper struggle for all people of conscience to see that end of impunity.”

Ferguson said that they will mobilize the international community not only to make this issue that won’t go away but also to show that to continue measures against the people will be met with an international outcry that will enforce change.

Bulatlat.com is a product of the times. It was born right after the ouster of the Estrada administration in 2001 by a politicized and empowered citizenry who were tired of the blatant corruption by those who claimed to work for the interests of the Filipino people. Bulatlat.com seeks to reflect the people’s views and stand on issues that affect their lives and their future — human rights and civil liberties, national patrimony, workers and peasant rights and interests, migrant rights and welfare, the rights and status of women, indigenous people’s rights, the environment, among others.