Tribes Mount Organized Responses To COVID-19, In Contrast To State And Federal Governments

Epidemics have been part of colonialism since settlers arrived. And, in the case of Indigenous nations, the story of inequity is imbued with dispossession of lands and is met with organizing from the inside. 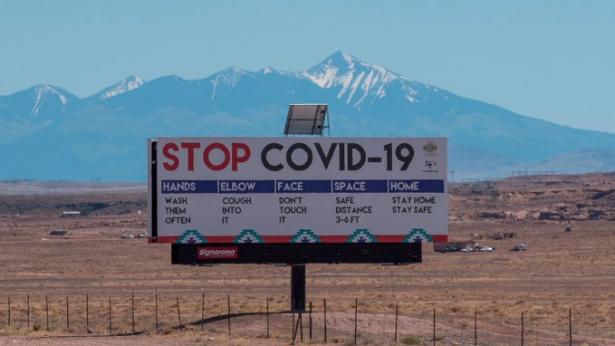 As the months roll by, the pandemic continues to hit Indigenous nations hard. But this phenomenon is not new. Epidemics have been part of colonialism since settlers arrived. Health inequities tell us that illnesses have different outcomes on different populations; however, leading medical professionals warn the general public of the dangers of oversimplifying health data. They don’t tell the whole story. And, in the case of Indigenous nations, the story of inequity is imbued with dispossession of lands and is met with organizing from the inside: two crucial points for untangling and responding to COVID-19.

As scholars who have studied impacts of the virus and Native nations, we have found that Indigenous nations have reacted quickly and effectively to the pandemic.

In our analysis, tribal nations have implemented guidelines and policies that appear to be far more effective than those used by the states they are in. These responses include locking down roads and implementing guidelines earlier and more carefully than others and developing relevant modes of delivery of supplies. Their response shows that Indigenous nations and communities know what they need; they are the directors of their own protective measures.

Protecting themselves and their land

Even when governors in the states tribes are in disagree with them, nation leaders stood out. Responding to the pandemic also means continuing to exercise sovereignty.

For example, in April, tribes in South Dakota set up checkpoints for cars coming onto their land and asked passersby not to enter. South Dakota Gov. Kristi Noem characterized the checkpoints as illegal roadblocks and ordered the tribes to cease their activities and called on the White House to intervene.

Later, at a rally at Mount Rushmore, President Trump referred to the Native Americans protesting his gathering on their land as “angry mobs” and opened his event with “Garryowen,” the well-known Seventh Cavalry regimental song played by Custer in battle. Still, as coronavirus spikes continue to break records, Native nations have managed to control traffic on and off reservation land.

The Shinnecock Nation is also successfully organizing strategies to protect its people, land and ancestors. The Shinnecock Nation is surrounded by Nassau and Suffolk counties on Long Island, home to some of the wealthiest people in the world. Those counties served as an escape for New Yorkers last spring when the pandemic raged. Even with the onslaught of people, many of whom may have been exposed to the virus, the Shinnecock took action and kept the number of cases to a mere handful by following guidelines provided by the Centers for Disease Control and Prevention.

This is nothing new for Shinnecock people. Protecting themselves has been a necessity for survival since 1640, when English settlers purchased eight square miles of Shinnecock land, the origin of what is now Southampton. European settlers brought smallpox to Long Island, which had devastating impacts on Shinnecock and other Indigenous peoples of Long Island. Centuries later, however, they travel across Long Island and from all over the U.S. to attend one of the largest annual powwows on the East Coast, held on Shinnecock Nation every summer. This year, for the first time since its inception in 1967, the powwow was virtual.

In fall 2020, at the behest of members of Shinnecock Nation, Southampton adopted the Unmarked Graves Protection Act. This move came after years of development and disruption of burial grounds. One such example is the well-known Shinnecock Hills golf course. Now, a coalition of Shinnecock and its allies, Warriors of the Sunrise, has set up camp on the Shinnecock Nation and is asking for statewide passage of the act. They also want the state to drop its lawsuit against the Shinnecock Nation over a signboard that has provided COVID-19 related information information for heavy commuter traffic.

Navajo mask mandate and organizing from inside

In the Southwest, multiple tribes have quickly responded to COVID-19. The Navajo Nation has acted more swiftly and strongly to COVID-19 numbers than Arizona Gov. Doug Ducey, who was slow to suggest guidelines at the pandemic’s beginning and quick to let them expire. In contrast, Navajo Nation President Nez put out a mask mandate and began a public education campaign on the Navajo reservation in the early days of the pandemic. Still, numbers and impacts of COVID-19 continue.

Additional Native-led efforts to meet community needs have been relevant and strong. This includes the Native-led Yee Ha’ólníi Doo, a Navajo-Hopi relief fund that raises money for food, water and “kinship kits” with Navajo and Hopi people in the region.

Grassroots strategies work because they are dynamic and vigilant; tribal members best understand community needs. Ethel Branch, former Navajo Nation attorney general, told our authors that the fact that COVID-19 disproportionately impacts these communities indicates a “target on our culture.” Elders, she said, carry language and traditional knowledge. This is why Yee Ha’ólníi Doo distributes two weeks’ worth of food and water to elders through a “family-based relief approach”: because elders, they know, will “share with their family members.”

Other organizations left the area after the first surge, but this one has continued to provide consistent relief. They know the foods and resources that are most appropriate for people who live there. “We love our people and we care about them,” said Branch. “They are our family members and so we are really purposeful in how we apply resources. We care about saving every life until this pandemic is gone.” And now, during another spike, this organization and others continue to collect resources for lifesaving actions across tribal lands. Perhaps it is time to consider dispossession as an ongoing health disparity. Stories that focus only on the need and despair of Native people overlook long-held practices of sustainability, kinship and health.