The ‘insurrection’ - who dunnit? 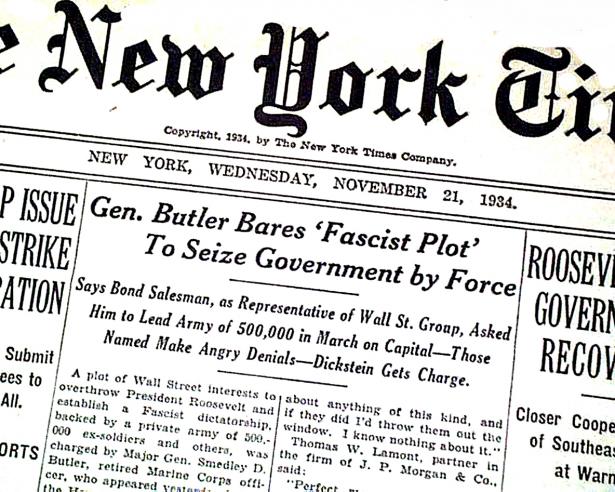 A screenshot from The New York Times front page discussing Smedley Butler and “The Business Plot.” Credit, Coffee or Die

The Coup in Context

By Eric Foner
The Nation

Those familiar with American history know that the Capitol riot was hardly the first effort to overturn extralegally the results of a democratic election. The Reconstruction era and after witnessed many such events, some far more violent than the January 6 riot.

In the right-wing authoritarian imagination, “order” does not equate with justice, nor with the equal application of the law. It means enforcing a hierarchy of racial caste, of gender-based submission, of a Christian-centric polity.

By Adam Gabbatt
The Guardian

Experts are warning the US is facing a wave of rightwing ‘Christian nationalist’ legislation in 2021, as the religious right aims to thrust Christianity into everyday American life.

Trump’s ability to sell his coup to the base is a classic example of fascist gaslighting, via his efforts to farm out insurrection to supporters, while pretending to remain above the fray.

Who Was Who At the Coup

The crowd included members of the Proud Boys and other groups with violent ideologies. Videos reveal the presence of several noted hardcore nativists and white nationalists who participated in the 2017 white power rally in Charlottesville, Virginia.

By Vida Johnson
The Conversation

A poll found that 12% of Americans supported the actions of those who took part in the attack. But the percentage of police officers who hold views in support of white identity extremism may be at least as high or higher.

Lawmakers who interacted with the pro-Trump protesters who rioted at the Capitol last week could face criminal charges and will almost certainly come under close scrutiny in the burgeoning federal investigation into the assault, former prosecutors said.

An unprecedented wave of corporations, trade associations and GOP-supporting groups are vowing to cut off contributions to Republican members of Congress who objected to certifying the presidential election.

In online havens for MAGA extremists, a growing minority of the president’s once-devout backers are now denouncing him and rejecting his recent pleas for peace. Some have called for his arrest or execution.

By Matt Fratus
Coffee or Die

The story of a plot by Wall Street interests to overthrow President Franklin D. Roosevelt and establish a fascist dictatorship via a private army of former World War I soldiers sounded crazy. Maj. Gen. Smedley Butler, however, had the evidence to prove it.

By Molly Hurley
Bulletin of the Atomic Scientists

A post-colonial perspective on national security begins by overturning a number of currently held assumptions within the mainstream nuclear policy regime. The 2021 nuclear ban treaty can help subvert these assumptions.