This is a battle between those who want to ensure permanent white minority rule vs. all those who believe this country must become a multiracial democracy. It’s daily trench warfare on every front, with USA's future if not the entire planet at stake. 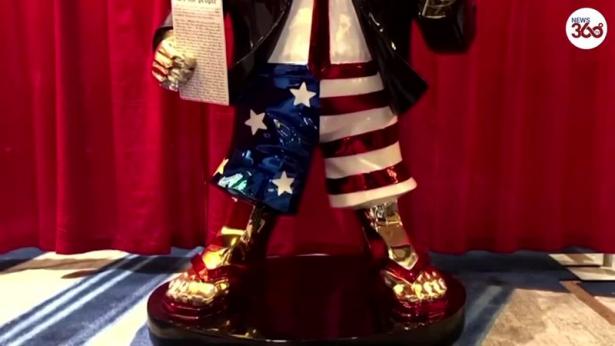 This article restarts Organizing Upgrade editor Max Elbaum’s This Is Not a Drill column series from 2020. This new installment argues that the GOP is now more unified behind the Trumpist agenda of racist authoritarianism than it was before the 2020 election. The need to block their drive to roar back to power is therefore as urgent as it was when OrgUp first named this column last year. The complete set of 2020 This Is Not a Drill columns, as well as This Is Not a Drill Live dialogues about strategy featuring leading left organizers can be found here.

Even before the semi-formal anointment of Trump as the GOP’s post-2020 top leader at the Conservative Political Action Conference (CPAC) Feb. 28, the twice-impeached former President had been awarded the crown.

Former Senate Majority Leader Mitch McConnell, considered Trump’s most powerful opponent in the media-proclaimed “Republican Civil War,” had surrendered without a fight. On Feb. 13 he had told the country, “Trump’s actions that preceded the [Jan. 6] riot were a disgraceful dereliction of duty.” Four days later he said on FOX News that he would “absolutely” support Trump for President if he was the 2024 GOP nominee.

That’s game over. The Trump-provoked, Confederate-flag-waving assault on the Capitol Jan. 6 didn’t split the GOP. Rather, it revealed that from bottom to top the Republican Party has become even more Trumpified than it was while Trump was President.

The GOP is unanimous in support of intensified voter suppression and gerrymandering efforts and is currently pushing more than 250 restrictive bills in 43 states. But Trump’s loss in 2020 has convinced most party heavyweights that even these may not be enough to win elections in a crisis-ridden country where people of color are a growing share of the population and young people of all backgrounds are leaning sharply leftward. So it’s not just the narcissist-in-chief who has decided that measures more extreme than skewing the racially biased and undemocratic U.S. electoral system even further in the GOP’s favor are now required.

The GOP’s unity behind “no consequences for those who incited, planned and financed Jan. 6” sends the bottom-line message. It’s all about winning; facts are irrelevant, and outright theft of elections – including theft via threats and use of violence – are now added to the standard GOP toolbox.

This isn’t abstract. The Trump-controlled GOP apparatus is moving systematically to oust every Republican election official and secretary of state who obeyed the law in 2020 instead of following their party’s dictates. Warnings both political and physical have been issued against any who would do the same in the future. Meanwhile – no coincidence here – members of armed militias and Q-Anon supporters are touted as future leaders.

An apt warning of the potential consequences was shared by Ian Basin, White House Associate Counsel under Obama: “If Republicans control the House and Senate in 2024, there’s no way a Democrat, if he/she wins the presidential election, will be certified and allowed to take office.”

So yes, there is a Civil War underway. But it is not within the GOP. It’s a 21st century version of the 19th century one: a battle between “Jefferson Davis Republicans” who want to ensure permanent white minority rule vs. all those who (whether grudgingly or enthusiastically) believe this country must become a multiracial democracy. It’s daily trench warfare on every front, with the future of the country if not the entire planet at stake in the outcome.

The just-concluded CPAC gathering offered a detailed picture of the GOP’s current state.

To enthusiastic chants of “You won! You won!” Trump promoted the lie that he was the real winner of the 2020 presidential contest. Despite this myth being debunked by judges, election officials and even a few Republican heavyweights, recent polling shows that 75% of Republicans agree with him, and 6% are unsure. Seven panels at CPAC focused on “protecting elections,” under subtitles like “The Left Pulled the Strings, Covered It Up, and Even Admits It”; “Failed States (PA, GA, NV, oh my!)”; and “They Told Ya So: The Signs Were Always There.” Outside of CPAC, GOPers are salivating at the prospect that the Supreme Court will gut the one remaining provision of the 1965 Voting Rights Act that offers any protection at all against racist voter suppression in a case the Arizona GOP is arguing this week.

Bottom line, the GOP is taking the position that elections are only free, fair, and legitimate if they win. And that Black votes are inherently suspect and therefore shouldn’t be cast. Or if they are cast, they shouldn’t be counted.

CPAC’s presidential straw poll showed 95% of conference attendees said the GOP should continue to embrace Trump’s issues and policy ideas. The only actual policy idea presented in Trump’s speech was that the U.S. should crack down even harder on immigration. But a look at what Trump actually did in office tells us what CPAC’s 95% are backing: tax cuts for the rich; further gutting of labor protections, environmental regulations and protections for LGBTQ people; more climate change denialism; contempt for public health amid a pandemic; more federal land to be opened to mining and oil extraction; wreck the post office; subsidize private schools and starve public ones; turn the Justice Department into a political arm of the GOP, and replace civil rights enforcement with a priority of preventing alleged discrimination against Christians.

That’s what the country is in for if the GOP’s steal-elections strategy succeeds.

This level of lies, conspiracy-mongering, and cult-like worship of Trump has been too much for some. A steady dribble of traditional conservatives – some prominent and others not – are leaving the GOP. Several GOP officials are retiring before they otherwise would, still too weak-kneed to fight Trump but not willing to defend the current GOP approach to politics either. A few outliers, like the 24 GOP House members and Senators who voted to impeach or convict, remain in the fold.

Periodically a report appears asserting that “if the votes had been by secret ballot” scores of GOP Representatives would have voted to impeach and dozens of GOP Senators to convict. Supposedly they didn’t do so due to fear such a vote would end their political careers or, in some cases, bring physical harm to themselves and their families.

Such reports are usually framed as “reassurances” that things in the GOP are not as bad as they seem. But they are the exact opposite: alarm bells indicating the degree to which threats of violence have become accepted as a weapon used by a growing portion of the Republican coalition.

Whether you want to use the word fascist to describe this mode of politics or not, to underestimate the danger it poses, or to think that anyone will be exempt from being its target, is foolish.

CHALLENGE TO THE LEFT: BLOCK AND BUILD

The impact of what the GOP has become is evident in the fight over Biden’s stimulus bill and the minimum wage. It hangs over the looming battles on every issue where progressives have advocated transformational policies as expressed in the PRO Act, the THRIVE agenda, the BREATHE Act, the Green New Deal and Medicare for All. The Republican stance is simple: Obstruct every measure that might benefit workers and the oppressed. Keep ginning up “the base” by spreading lies and fanning white grievance. Prepare a better organized coup for 2024.

An effective left response has to include numerous components within some version of a “Block and Build” framework. (Tarso Ramos, Executive Director of Political Research Associates, lays out this approach to blocking the right while building the independent power of the left here and here.)

Our urgent immediate tasks include: pushing the Biden administration and contributing to legislative victories that make a substantial difference in the lives of all those afflicted by today’s interlocking health, economic and environmental crises; immersing ourselves in the day-to-day fights at workplaces and in communities; creating on-ramps so the millions who are sympathetic to our ideas can join our organizations and campaigns; standing firm on issues like foreign policy where the Biden administration approach is more like than unlike Trump’s.

Advances in these and other areas are crucial to building a durable progressive coalition, rooted among the constituencies hardest hit by today’s crises and having the greatest stake in transformative change.

At the same time, we need to give due priority to the battlefront that brought us the breathing room we have today. That means building on the rich experience gained by the host of left and progressive forces that threw down to beat Trump at the ballot box in 2020 and then protected the result. We need to continue work in the electoral field with the twin aims of defeating GOP candidates at every level and electing more people with the politics of the Squad to Congress, state legislatures, district attorney seats, and other offices. And then do everything necessary to protect the result.

Gains made in these areas would translate into increased progressive strength. They could be a breakthrough in convincing millions that the left not only has good ideas but can be counted on to deliver the goods if given a measure of governing power.

TRENCH WARFARE ENDS WHEN ONE SIDE CRACKS

Further, electoral gains could do more than meet the essential goal of holding the authoritarian racist GOP at bay. The GOP’s reliance on a steal-elections strategy is at bottom a desperation move. They have all but given up on winning a majority in a truly fair election, and even the relatively small number of defections their latest extreme turn has caused pushes them further into a corner. If we can expand on 2020’s all-hands-on-deck effort in 2022 and then 2024, we can both block disaster and build the left’s independent clout. A few election cycles like that and the tiny fissures that now exist among Republicans could widen or even become the kind of crisis many predicted would break out this year.

That’s how trench warfare gets resolved. It’s a long, hard slog, during which the side that relaxes first gets defeated and the one that makes the most of every small advance gains the upper hand. And then, sometimes unexpectedly, one side cracks.

On a mass call sponsored by The Frontline after November’s election, Working Families Party National Director Maurice Mitchell said he agreed with the broad consensus that the 2020 election had been the most important in our lifetimes. He added that 2022 would be the second most important.

Everything that has happened since then, and especially since Jan. 6, proves this is