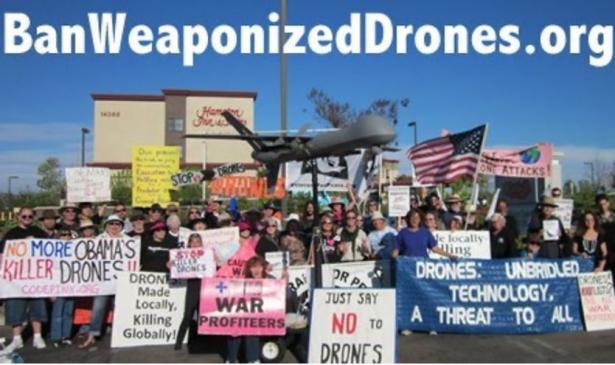 At a time in my life when I barely knew drones existed, a young Lebanese mother mourning the death of her six-year-old daughter, Zainab, helped me understand how monitoring by drones terrified her and her neighbors.

It was the summer of 2006, during a war referred to as the Israeli-Hezbollah war.

On July 30th, around 1:00 a.m., Israeli warplanes fired missiles at buildings in Qana, Lebanon, a small village in southern Lebanon. One missile, a bunker buster supplied by the U.S. corporation Raytheon, caused a three-story building to collapse, killing an extended family of 27 people. Fifteen of them were children.

Two weeks later, with a team of international observers, I visited Qana because of reports of a massacre there.

Driving toward the village, we saw men preparing cement structures for burials.

We entered the village on foot and saw men arranging white plastic chairs for guests who came to mourn with family members.

Four women sitting quietly in an outdoor patio invited Farah Mokhtarazadei and me to join them.

Each time a neighboring woman arrived, the women would stand and embrace one another. They had borne their pain for 18 days, since the bombs slammed into homes in their village. The mass funeral had been delayed until families could safely gather for burials.

One mother had suffered injuries. Under her veil, she wore a medical hood, and a thick brace encircled her neck.

She stiffly shifted her tall, slender body, unable to point across the street to what was once a building where frightened children huddled together for shelter during the bombing. One of those children was her six-year-old daughter, Zainab.

Later, I realized she was referring to surveillance drones, overhead, which she was sure must have filmed children running back and forth between their homes and this building. Umm Zainab said we must be able to see how close the two homes were. Yes, we could see. We listened to the drone of an unmanned surveillance plane criss-crossing the skies above. Couldn’t they see?

Umm Zainab asked one of the children to bring her a stack of newspapers. One front-page photo showed Zainab held aloft, lifeless, by a strong, helmeted relief worker who seemed to be shouting in agony. Another photo showed Zainab lying next to two-year-old Zahr’a.

The force of the explosion apparently damaged the internal organs of the little girls, as they slept. Their bodies were not mutilated.

Then Umm Zainab placed in my hands a framed photo of Zainab, a curly headed little girl with huge dark eyes posing seriously for the camera. One could only imagine her smile. “Who are the ‘terrorists’?” Umm Zayneb whispered, slowly reaching over to point at Zainab’s photo. “Is she the ‘terrorist’?”

Umm Zainab and her neighbors endured the sheer terror of being monitored, constantly, by those evidently willing and certainly able to kill their children.

I recall hearing an anguished account, in 2009, from a Pakistani man whose village, Khaisor, was struck by drones.

There, village elders, following their custom, had welcomed strangers who asked for a meal. U.S. military drone surveillance was presumably tracking the strangers. The home where the meal was served may have been deemed a Taliban stronghold.

At 4:00 a.m. the following morning, the U.S. bombed the home, killing 14 women and children and two elders.

The attack exemplified a form of one-sided war, a video game for one side, but for the other, the horror of destroyed homes, murdered loved ones and neighbors, and mutilated survivors.

I asked our guest if he could ever imagine people in his village being willing to converse with ordinary U.S. people about possibilities for peace. He looked at me as though I were a bit off my rocker. “Who would ever be so crazy,” he asked, “as to not want peace? We would only ask you to leave your weapons outside.”

Leave the weapons outside. Leave them out of the toolkit. I think this advice can help persuade people, worldwide, to endorse a total ban on development, storage, sale, and use of weaponized and surveillance drones.

The proliferation of weaponized drones threatens people throughout the world, making it easier than ever for militaries to wage war. See the long list of hundreds of drone attacks in Pakistan alone.

Drone technology makes assassination physically safer for the perpetrator, thus encouraging nation-states to use assassination as a basic element of foreign policy.

Not only countries but also insurgent groups and paramilitaries continually acquire and use drones, raising possibilities for retaliation, blowback and mistrust.

Drone assassination and killing on suspicion, when ordered by, for example, a U.S. president, violates laws and principles ensuring due process.

Whoever gives the order becomes the judge, jury and executioner, unchecked by due process.

The targeted person or group never has an opportunity to appear before a court of law.

Between 2010 and 2019, I visited the Afghan Peace Volunteers (APVs) in Kabul several times a year, making 30 trips in all.

Four blimps steadily hovered over Kabul, equipped with surveillance cameras to constantly film people below. Unseen but likewise functioning as “eyes in the skies” were surveillance and weaponized drones.

These machines acquired hundreds of miles of video footage which was analyzed by teams of U.S. military and intelligence personnel, ostensibly to establish patterns of life in Afghanistan.

I believe far more valuable information is regularly gathered by the APVs who hike up steep mountainsides, along icy paths, during harsh winter months to visit widows and orphans living in hovels, lacking food and clean water.

They sit with the women, accepting tea and the warmth of utterly simple hospitality, while asking basic survey questions: How many times each week does this family eat beans? What is the source for your water? What is your rent? Who earns an income for this family?

Answers are recorded in notepads, and if the last question elicits a response indicating the main income earner is under 12 years of age, that family will likely be invited to participate in APV projects helping families to survive.

The APVs have enabled widows to earn a living wage by manufacturing heavy blankets which are then distributed free of charge at refugee camps in Kabul. They have also developed programs for “street kids,” helping them become literate and rely on a caring community.

An estimated 600,000 children hawk goods like tissues and cigarettes on the streets of Kabul to earn money for their displaced families who have fled to refugee camps.

I remember seeing my young friend, Habib, at work in a Kabul street. In one hand, he carried a scale, his other hand holding the hand of his younger brother. He earned a meager wage by placing the scale on the ground so that people could weigh themselves.

He and his brother would then return to their home which consisted of a piece of plastic held up by four poles. For warmth, they relied on blankets issued by the UNHCR (United Nations High Commissioner for Refugees).

The young APV surveys actually do help establish patterns of information about daily life in Kabul, and the information truthfully pertains to life and death matters, as well as imminent needs.

Drones criss-crossing the skies and hunting for high-value targets create a distraction from actual crises afflicting people in Afghanistan. Instead of suggesting ways to alleviate suffering, U.S. drone surveillance potentially sets the stage for criminal assassination. What’s more, people learn very little about the consequences of these attacks.

Consider, for example, the plight of Afghan laborers, in September 2019, who were hired to collect pine nuts. Their employer had already notified provincial authorities, by letter, that migrant laborers would encamp outside his farm.

On September 17, 2019, exhausted from their day’s work, about 150 migrant laborers set up an overnight camp. In the early hours of the following morning, a U.S. drone attacked, killing at least 32 people. More than 40 others were wounded. The U.S. military claims ISIS fighters were hiding among those who were killed.

There are no reports to help us know the names and ages of those who were killed or to learn what help was available for the wounded. How many were children?

In a remote, rural area of eastern Afghanistan, what are the odds of maimed and wounded survivors being offered X-rays, surgery, or medication?

The key factor driving drone warfare is profits, not people.

As part of a broader effort to sell more weapons overseas, the Trump administration, in July 2020, relaxed rules regarding export of aerial drones to U.S. allies.

This was a change long sought by drone manufacturers such as General Atomics Aeronautical Systems, maker of the MQ-9 Reaper.

Under President Trump, the U.S.’s easing of restrictions on aerial strikes led to an increase of attacks across the Middle East, Afghanistan and neighboring countries.

For example, according to Neta Crawford’s research for the Cost of War Project, U.S. and allied air strikes in Afghanistan killed 700 civilians in 2019—the largest annual casualty count since the beginning of the war in Afghanistan over 19 years ago.

When President Joe Biden was vice president under former President Barack Obama, U.S. use of drone strikes was 10 times higher than that of Obama’s predecessor George W. Bush.

Biden has never publicly criticized President Obama’s legacy of expanding the use of drones, and his pick for top spy chief, Avril Haines, played a central role in Obama’s secretive drone war.

Writing for The Intercept, Elise Swain notes that Biden has pledged to end “endless wars” and has advocated for a strategy of “counterterrorism plus,” relying on a combination of Special Forces and aerial strikes.

But if President Biden wants to end endless wars, he should completely scrap reliance on militarism and weapons to solve problems. Taking weapons out of the toolkit pushes people in powerful places to stop provoking cold wars and the proxy wars they spawn.

People who fought for and negotiated treaties banning land mines, cluster bombs and nuclear weapons should now guide international momentum to ban weaponized drones through means of a treaty prohibiting the development, sale, storage or use of these pernicious weapons.

Banning weaponized and surveillance drones would enhance our capacity to work toward meeting human needs. Countries could free up scientists and innovators to collectively tackle the greatest terrors we face, such as the terrors related to climate catastrophes, the likelihood of ongoing pandemics, the threat of nuclear annihilation, and the suffering caused by vast income inequities.

[Kathy Kelly is a peace activist and author whose efforts to end military and economic wars have sometimes led her to live in war zones and U.S. federal prisons. She can be reached at: kathy@vcnv.org.]

This statement was written for the website “Ban Killer Drones” and will be launched in March 2021 to promote the creation of an international treaty that would ban weaponized drones and drone surveillance.

CovertAction Magazine is made possible by subscriptions, orders and donations from readers like you.