Republicans and fascists and big biz, oh my! The Nevada Democratic upset, two officials lay out the racial divide, and more news from the culture gulch 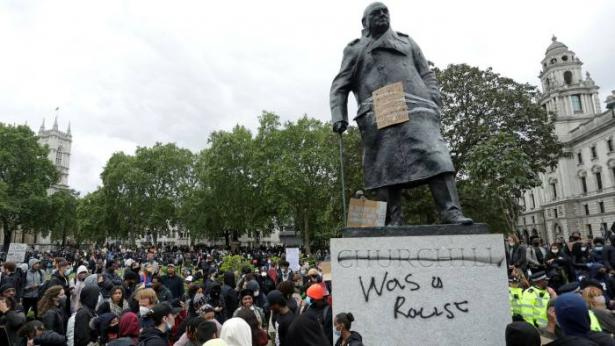 The statue of Winston Churchill in Parliament Square after it was defaced with the words (Churchill) ‘was a racist’. Credit, Isabel Infantes/AFP/Getty

A series of political processes set into motion by Republican Party officials and organizers is propelled by a far-right media ecology that seeks to cultivate and exploit an increasingly radical ultraconservative base.

A progressive slate of nominees backed by the Democratic Socialists of America won control of Nevada’s Democratic organization. This prompted employees of the state party to quit, taking $450,000 in funds with them—to set up shop elsewhere.

By Nitasha Tiku and Jay Greene
The Washington Post

Cancel Culture and the War on Woke

Who’s In Charge of Cancel Culture  By Benjamin Wallace-Wells, The New Yorker

From PC to Woke  By Otto English, Byline Times

If the Tables Had Been Turned By Tal Axelrod, The Hill

The Year of Anxiety

Our brains react to a “perceived” threat as if it is a real threat, and it triggers a need to reach safety. What complicates this need is that many of us can’t yet because the pandemic is still very much ongoing.

The Year Without Theater

I celebrate that our theaters closed, because it’s one of the few ways we’ve protected our people, by acknowledging that they were not essential.

Return to the Workplace?

The pandemic’s impact on the global workforce may have changed things forever.