The Executed Innocent: Why Justice for Ethel Rosenberg Still Matters

How a new investigation into a 1951 spy trial exposed long-running injustices committed in the name of US security. The Rosenbergs’ story is as relevant to our times as it was 70 years ago. 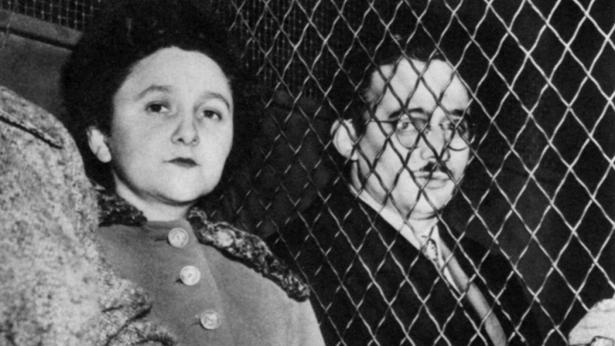 Ethel and Julius Rosenberg are separated by a wire screen as they are transported to Sing Sing Prison following their conviction in New York City in March 1951.,

On March 29, 1951 Julius and Ethel Rosenberg were convicted of conspiracy to commit espionage.

New York’s southern district federal court decided that they were trying to pass information about the American atomic bomb to the Soviet Union. Two years later, they were executed, leaving behind two young sons.

That is the short version of the story.

The longer version is one of nationalism, deceit, a fractured community, family betrayal, and a bluff by the authorities that went too far. It is a story in which patriotism and law enforcement tactics were used to thwart justice, and in which power was exploited. In all of these ways, the Rosenbergs’ story is as relevant to our times as it was 70 years ago.

In the 1950s, America was in the midst of both the Cold War and the Red Scare – a conviction that communism would take over the United States if not stamped out.

As early as 1941, senators Burton Wheeler and Gerald Nye investigated Hollywood’s role in promoting Soviet propaganda. Wendell Wilkie, an attorney working on behalf of studios, argued that, by “communism,” the senators meant “Judaism”. But this did not deter the authorities: the House Un-American Activities Committee took up the investigation into Soviet propaganda. The ten film writers who refused to cooperate with Congress became known as the Hollywood Ten. For their principles, they were effectively blacklisted.

Then there was Senator Joseph McCarthy, who, from 1950, gained fame for his accusations of and investigations into communist influence in the United States. McCarthy’s two sidekicks – Roy Cohn and Gerald Schine – both came from Jewish families, and efforts by McCarthy himself tended to target Protestants, not Jews. But, as Rachel Kranson writes in Ambivalent Embrace (2017), anecdotal evidence suggests that anti-communist investigations at both state and federal level disproportionately focused on Jews.

The most famous case was that of the Rosenbergs.

Julius and Ethel Rosenberg, married in 1939, were both members of the Communist Party. In 1942, Julius was recruited by Soviet spies while working at the Army Corps Engineering Laboratories. In 1944, he recruited his brother-in-law, David Greenglass, who worked at the Los Alamos National Laboratory in New Mexico.

The US government would later allege that Greenglass, while working on the Manhattan Project (the research and development programme that resulted in the US nuclear bomb), passed material to Julius Rosenberg, who passed it to a courier by the name of Harry Gold, who in turn gave it to the Soviets.

Harry Gold was arrested in May 1950 in connection with the case of a Klaus Fuchs, a German-born British citizen who had been spying for the Soviets. David Greenglass was arrested in June. At first, Greenglass named his own wife, Ruth, and Julius Rosenberg as co-conspirators, but not his sister Ethel.

Julius Rosenberg was arrested in July. Ethel was arrested in August 1950 on the courthouse steps in New York after testifying that she hadn’t known anything about the espionage ring.

Shortly before the trial, David Greenglass changed his story. It was Ethel, he said, who had typed up the notes sharing what they had learned. She knew what had been going on.

Judge Irving Kaufman, himself Jewish, began the trial on 6 March 1951, proclaiming, “The evidence will show that the loyalty and alliance of the Rosenbergs … were not to our country, but that it was to communism.”

In 2001, 50 years after the trial, New York Times editor Sam Roberts published a book called, The Brother: The Untold Story of the Rosenberg Case. In it, Greenglass essentially recanted the testimony that doomed his sister. “I don’t remember that at all,” Greenglass said. “I frankly think my wife did the typing, but I don’t remember.”

“My wife is more important to me than my sister,” he added. “Or my mother or my father, OK? And she was the mother of my children.”

One might imagine, given that anti-communist activities focused on Jews, that the organised, mainstream Jewish community would have spent this period standing up to anti-communist investigations.

But the response in the case of the Rosenbergs was even more dramatic.

“Over the years, I’ve spent a lot of time, since I’ve grown up, looking into the reaction of the Jewish community and trying to understand it,” the Rosenbergs’ son, Robert Meeropol, told me over the phone earlier this year.

In 1953, an American Jewish Committee staffer wrote a pamphlet, The Rosenberg Case, that supported the death sentence. Historian Lucy Dawidowicz wrote in 1952 in Commentary, the editorial arm of the American Jewish Committee, that the couple should be executed. Ethel Rosenberg had reportedly yelled out, as her sentence was upheld by the Court of Appeals in a decision written by Jerome Frank, “this is the way the Judenrat performed for the Nazis in the Warsaw Ghetto”. For Dawidowicz, this outburst represented an “attack” on “bona fide Jewish leaders” and was meant to “pick up sympathy and support from individual Jews who may be suckers for this particular bait”.

There were individual Jews sympathetic to the Rosenbergs’ plight: the National Committee to Secure Justice in the Rosenberg Case, Meeropol told me, was mostly made up of Jews. At least one Conservative rabbi argued against their execution on the grounds that Judaism opposes capital punishment. But Meeropol believes that mainstream Jewish organisations, together with Judge Irving Kaufman, “felt that if they wrapped themselves in the American flag, they could prove their loyalty to America, by not coddling their co-religionists”.

In her 2004 book The Jews of the United States, historian Hasia Diner wrote, “Since they [Jews] were a group of people who just decades before had been labelled inassimilable foreigners, the Rosenberg case specifically, and the anti-communist crusade generally, made the Jews exceedingly nervous.”

Today, however, Diner feels slightly differently. There was a “long ongoing internal Jewish war against the communists”, she told me.

That isn’t to say that fear wasn’t involved at all. But mainstream Jewish organisations “didn’t like communists, didn’t like behaviour within communal institutions, disagreed with the philosophy and so on. To me, that long struggle is as much the context as fear of anti-Semitism,” Diner said. These organisations could have, at the very least, come out against the execution. They didn’t.

When he was ten years old, Mark Denbeaux was watching a Boston Red Sox game when a news flash cut across the screen: the Rosenbergs had been executed.

Years later, Denbeaux would himself be involved in the case. In 2016, Seton Hall Law School's Center for Policy and Research, of which he is the director, completed and released a report titled, The Government’s Hostage: The Conviction and Execution of Ethel Rosenberg. The report identified an internal FBI memo from 17 July 1950 – a month before Ethel was arrested – which said the FBI had “insufficient evidence” to arrest her, but that she could be used “as a lever against her husband”. One day later, the FBI arranged a visit for David Greenglass with his wife and children in jail, the report noted. Greenglass then mentioned a conversation between his wife and Ethel; this was considered enough to be “corroboration”. He did not claim that Ethel typed up the notes until shortly before the trial.

The report’s authors also found that, a month before the trial, an assistant US attorney general responsible for prosecuting the Rosenbergs appeared before a Congressional Committee to brief it on the case. He said that the Department of Justice “felt” Julius Rosenberg was “the keystone to a lot of other potential espionage agents” and that “if we can really break him, that he will open the gates and give us information which [would] lead to a lot of other individuals”. Therefore, “we think it is important that he be under the shadow of a death penalty, at least for a while”, and that perhaps they could get Julius to cooperate by subjecting Ethel to a “stiff sentence of 25 or 30 years”.

I asked Denbeaux how Ethel ended up being executed. “It was intended as a bluff,” he said. They wanted to make Julius talk. “And Julius didn’t.”

“Everybody involved decided to play this trick and threaten to execute someone in order to get someone else to confess,” Denbeaux said. “And when the people weren’t bullied, they just went ahead with it.”

After the report’s publication, Meeropol and his brother, Michael, appealed to outgoing president Barack Obama to exonerate their mother. The White House did not.

Ethel’s case is, Denbeaux told me, unique. But there’s also an element of it that is not. Women especially are often brought in by the authorities, arrested and pressured into talking, he said. That still happens today. It is, he said, a “profoundly feminist issue”.

When I asked Meeropol if he thinks something like what happened to his parents, and particularly his mother, could happen again, he said, “I think that it probably already has in various ways.” He noted the push against so-called super-predators in the 1990s. He also mentioned Mumia Abu-Jamal, the Black Panther who was convicted of killing a Philadelphia police officer, spent years on death row, and is still in prison; his supporters maintain that his trial was sullied by racism and corruption.

Meeropol also cited the Patriot Act, introduced after the terrorist attacks on 11 September 2001, which led to an enormous expansion in government surveillance activity. “I think there’s a common political thread that runs through all of this,” he said, of basic rights being checked in the name of keeping Americans safe from ideologies, “and it’s still with us.”

According to a Pew study from 2016, 56 percent of Americans felt that the country had not gone far enough in taking steps to protect its security. Just 28 percent felt it had gone too far in restricting civil liberties. And though the Soviet Union is gone, fear of the threat to the American way of life remains: a Gallup poll released earlier this month showed 63 percent of Americans believe China’s rise is a “critical threat” to the US.

The Meeropol brothers did not bother appealing to Donald Trump to exonerate their mother. Given Roy Cohn’s history of representing Donald Trump, “the idea of pursuing that during the Trump administration was laughable”, Robert Meeropol told me.

But now there is a new president. And in June, there will be a new book on the subject. (The publisher of Anne Sebba's Ethel Rosenberg: A Cold War Tragedy declined an interview for this piece.)

The Meeropols don’t want to try to get people’s attention during a pandemic. They know that there are those who think both Rosenbergs were the same, who disappear Ethel into Julius, and who believe that all communists were guilty. The brothers know that what they’re asking for is unusual, and that it’s hard.

But given all that has come out since her execution, there is perhaps still a chance that Ethel Rosenberg could be exonerated.

The country, on the other hand, can’t be. If Americans are to judge the US’s handling of the case of Ethel Rosenberg, we will find ourselves guilty. And there can be no appeal.