Those who desecrated the Capitol in January called themselves patriots. Millions supported them, including members of both Houses. This again reminded one of Robeson, because seventy-two years earlier, another angry mob might well have lynched him. 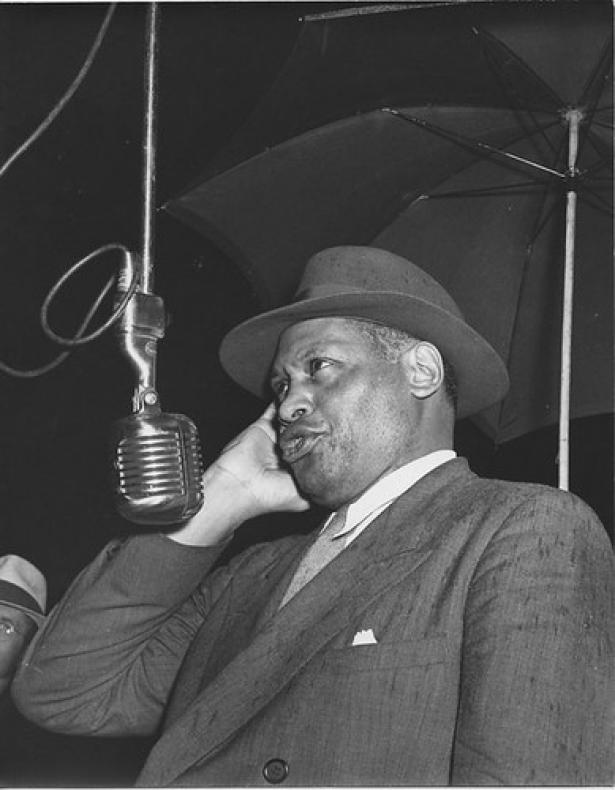 Editor’s note: Author Tayo Aluko is a Nigerian-born actor, singer, and playwright who lives in England. He first discovered the work of Paul Robeson in 1995 and, since 2008, has been performing around the world in a one-person show, “Call Mr. Robeson,” about Robeson’s life.

On April 9, 2021, the 123rd anniversary of Robeson birth, Aluko will launch a new radio play in which two middle-aged siblings discover a surprising familial connection with the legendary Black baritone as they listen to news reports of the racial awakening across America during the summer of 2020.

Watching the horrific scenes unfolding in Kenosha, Wisconsin, last August as a rightwing vigilante shot and killed two people protesting police violence and wounded a third, and then seeing the mob of white supremacists attack the U.S. Capitol in January, a lyric came to mind:

The people who desecrated the Capitol last January called themselves patriots. Millions supported them, too, including members of both Houses.

The particular version of The House I Live In was sung by Paul Robeson. From the first time I heard his recording, I was struck by the sad irony of him singing such a patriotic song, a song so expressive of love for his country and its people, only for him to eventually be successfully painted as a communist bent on violently overthrowing the government.

Yet the people who desecrated the Capitol last January called themselves patriots. Millions supported them, too, including members of both Houses. This again reminded one of Robeson, because seventy-two years earlier, another angry mob might well have lynched him.

The scene was the outskirts of Peekskill, in Westchester County, New York. The occasion, a benefit concert to support the Civil Rights Congress. Robeson, who had been born in 1898, the youngest child of a runaway slave, was by now perhaps the world’s most famous American, a highly successful stage and screen actor, and a concert singer of international renown.

An example of Robeson’s popularity was his singing of the patriotic cantata, The Ballad for Americans, to 30,000 people at the Hollywood Bowl in July 1940, accompanied by a large chorus and the Los Angeles Philharmonic. The United States would not enter World War II for another year, but by the end of that war, attitudes toward their ally, the Soviet Union, had completely reversed, and people like Robeson who refused to abandon his socialist beliefs began to be regarded with suspicion.

In a speech to the World Partisans for Peace Congress in Paris in April 1949, he stated that he didn’t believe African Americans should, or would, fight against the Soviet Union—a country which treated him, his people, and other minorities immeasurably better than America did. This speech was distorted by the American press as they ramped up anti-Communist sentiment. And, by the time Robeson returned to his country that summer, he had become a public enemy.

It was in this atmosphere that Robeson traveled to Peekskill to sing on August 27. Encouraged by the press, local militia attacked the organizers and the audience before the concert was due to start, forcing it to be cancelled. Robeson returned to New York and later announced at a press conference that he would be back to sing for racial equality and peaceful relations with the Soviet Union.

Another issue Robeson faced was that of antisemitism. His wife was part-Jewish, his son had married a Jewish woman two months earlier, and Paul himself was already a strong lover of Jewish culture, to the extent that two of the many languages he spoke fluently were Hebrew and Yiddish.

The concert went ahead on September 4, and labor unions had organized a protective guard of a few thousand trade unionists to encircle the 20,000-strong crowd. This included about a dozen guards around Robeson on stage, to shield him from any prospective sniper’s bullet. After his set, he was immediately spirited away.

But, as audience members left, they were led by the police into an ambush, where the local militia lay in wait to attack them. Dozens of cars were damaged, and 145 people were injured, including one Black man who lost an eye. Yet again, the mainstream press reported the incident as violence initiated by Blacks, Communists, and Jewish supporters of the un-American Paul Robeson.

Another sad, striking irony here is that only two years previously, Robeson had recorded these words, to great acclaim, describing America as:

The house I live in, my neighbors, white and black / The people who just came here, or from generations back . . .

The man who penned these lyrics was Abel Meeropol, writing under the alias of Lewis Allen, presumably in order to deflect attention from his Jewish heritage, his membership in the Communist Party, and to protect his position as a school teacher. Meeropol had written a poem in 1937 which became the lyrics to the anti-lynching song Strange Fruit. It is another irony that this gifted poet had to hide behind an alias to publish his work.

The right to speak my mind out / that’s America to me.

Robeson himself refused to hide behind anything or anybody. When a member of the House Committee on Un-American Activities (known as HUAC) asked at his hearing in June 1956 if he had once been known by the name of John Thomas, he retorted, “My name is Paul Robeson, and anything I have to say, I have said in public all over the world, and that is why I am here today.”

In June 1946, Robeson gave a speech at Madison Square Garden which showed why he was such a threat to the Establishment:

“A day or two ago, Mr. Bevin, the British Foreign Minister said . . . ‘If we do not want to have total war, we must have total peace.’ For once, I agree with him,” Robeson told the audience. “But Mr. Bevin must be totally blind if he cannot see that the absence of peace in the world is due precisely to the efforts of the British, American, and other imperialist powers to maintain their control over the peoples of Asia, the Middle East, Europe, and Africa.”

As true today as they were then, such words demonstrate why Robeson’s voice, like his rendition of The House I Live In, can be considered to be the soundtrack to a lost opportunity. It is the opportunity to hear and heed messages of truth, peace, and justice such as he delivered through his art, a weapon in defense of all the oppressed people on Earth.