books Eric Hobsbawm in the ‘London Review’: A Value-laden Selection

Eric Hobsbawm, among the most pre-eminent and valued Marxist historians of the late twentieth century, frequently reviewed for the London Review of Books. Here, a prominent British author does a dig into some of Hobsbawm’s many signal LRB essays. 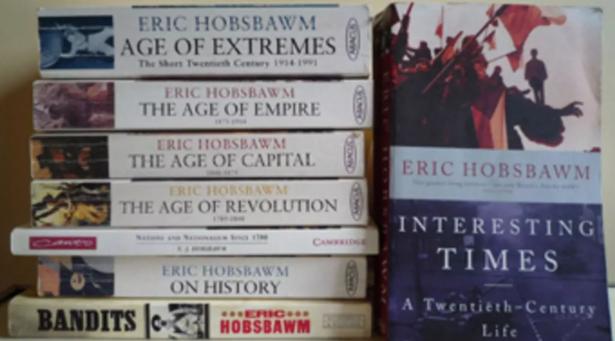 Some of the books written by Eric Hobsbawm.,France24

Eric Hobsbawm, the subject of a new documentary film by Anthony Wilks, wrote 24 pieces for the London Review of Books, the first in April 1981, the last in April 2012, a few months before his death at the age of 95. At the time he wrote the first review, he was best known for two widely read historical surveys, The Age of Revolution: Europe 1789-1848, published in 1962, and The Age of Capital: Europe 1848-75, published in 1975 (the third volume in the trilogy, The Age of Empire 1875-1914, would not appear until 1987). His more specialised work, on bandits, millenarians and other marginal people in modern European history, as well as academic articles on the standard of living in Britain in the Industrial Revolution and on the ‘General Crisis of the 17th Century’, had made him well known in the world of professional historians and teachers.

Born in Alexandria in 1917 to an English father and an Austrian mother (and therefore a British citizen), Hobsbawm grew up in their English-speaking household in Vienna during the troubled 1920s. Following the deaths of his parents he lived for three years with his uncle and aunt in Berlin. It was here that he became a Communist, though he did not formally join the party until later. In 1933, during the Nazi seizure of power, the family left for England, where he finished his schooling and went to Cambridge to read history, graduating in 1939. After war service he embarked on a PhD at Cambridge, and was appointed in 1947 to a lectureship at Birkbeck, London University’s college for mature, part-time students, where he remained until his retirement.

A good number of Hobsbawm’s essays in the LRB, not surprisingly, were reviews of books on 19th and 20th-century British and European history. His first contribution, however, was mainly devoted to a discussion of the products of the History Workshop, founded by Raphael Samuel at Ruskin College, Oxford, a further education college for trade unionists. While Hobsbawm recognised the huge enthusiasm generated by these annual meetings, often attended by a thousand people or more, he also complained that the empathetic approach of the History Workshop ‘sacrifices analysis and explanation to celebration and identification’. As a Marxist, Hobsbawm always demanded theoretical clarity in historical writing, and he didn’t find much of it in the History Workshop.

Hobsbawm was sceptical, as any Marxist had to be, of claims that political leaders such as Margaret Thatcher single-handedly changed the course of history. He did, however, pay tribute to the power of ideas in the labour movement, with a penetrating essay on Harold Laski. Hobsbawm’s contributions in this area included three that testified to the remarkable attraction of Communism to scientists in mid-20th-century Britain, such as Joseph Needham. He knew some of them well, and included personal reminiscences in his essays on J.D. Bernal, a colleague at Birkbeck, and Alan May Nunn, who betrayed British nuclear secrets to the Soviets. Hobsbawm’s essays on individuals were never purely biographical, and he has a great deal of interest to say about the political and intellectual worlds in which his subjects moved.

As a paid-up member of the Communist Party until it collapsed after the fall of the Berlin Wall in November 1989, Hobsbawm was also asked to contribute essays on Communist history, from the fall of Tsarism and the Bolshevik Revolution in Russia in 1917 to the crushing of the short-lived liberal Communist regime in Hungary in 1956 by Soviet-led troops. While he always looked to the 1917 Revolution as the seminal event in the history of the ‘short 20th century’, Hobsbawm’s view of the Soviet intervention in Hungary in 1956 was more ambivalent. At the time, he condemned it and demanded (needless to say, without success) the troops’ withdrawal; but he also considered the invasion necessary to prevent the revival of reactionary politics in the country. Unsurprisingly, the essay provoked a considerable correspondence. His ambivalence towards the Communist movement also permeates his penetrating and informative review of a clutch of books on its history in the UK, marked by a realistic recognition of the party’s political unimportance and a certain nostalgia about its lost potential. The British party’s obdurate Stalinism prompted the polyglot Hobsbawm to spend increasing amounts of time in the orbit of the Communist Party in Italy, which espoused the more liberal ideology of ‘Eurocommunism’.

Like his parents, Eric Hobsbawm was Jewish by origin but never practised Judaism or felt that he belonged to a ‘Jewish community’; all the same, his Jewish identity never went away and emerged more strongly in his later years. It inspired some of his most attractive essays. He was also a strong critic of Israeli policy towards the Palestinians, one of the few topics on which he wrote explicitly ‘as a Jew’, although he also affirmed his support for the existence of the State of Israel, not surprisingly for a man who had lost close relatives in the Holocaust.

Hobsbawm published his rather impersonal autobiography in 2002, but there was still some room for autobiographical essays in his contributions to the LRB: reminiscences of the Weimar Republic but also of the world of jazz – he had been an enthusiast since the 1930s, and for a while served as jazz critic of the New Statesman. Another enthusiasm, for the revolutionary history of Latin America, found somewhat indirect expression in the LRB only in the form of a thoughtful essay written for the anniversary of Christopher Columbus’s landing in the Americas.

By the 2000s, following the publication in 1994 of his bestselling Age of Extremes: The Short Twentieth Century 1914-91, Hobsbawm had become a nationally and internationally recognizable figure, invited to a gathering of retired statesmen, about which he wrote an entertaining essay for the LRB. The number and frequency of his contributions to the paperincreased in his last years – he no longer thought of writing books, and had more time for essays – and they showed no signs of failing powers as he entered his tenth decade. Physically, however, he began to run into the inevitable problems of extreme old age. His generous but not uncritical obituary essay on Tony Judt, a much younger historian of Europe with whom he had clashed over the years, and who died of motor neurone disease at the age of 62, was Hobsbawm’s last. He died on 1 October 2012 and was buried in Highgate Cemetery.

[Essayist  Richard J. Evans is Regius Professor Emeritus of History at the UK’s Cambridge University. His books include a three-volume history of German fascism,  an extended biography of Eric Hobsbawm , (2019, Oxford U. Press) and  the soon to be released  The Hitler Conspiracies: The Third Reich and the Paranoid Imagination. (forthcoming from Penguin in June 2021.)]