“Black, brown and poor white folks in prisons and jails are coming from communities where they are at greater risk for these social and environmental threats. Then they are being siphoned off, extracted, taken hostage and locked up in cages..." 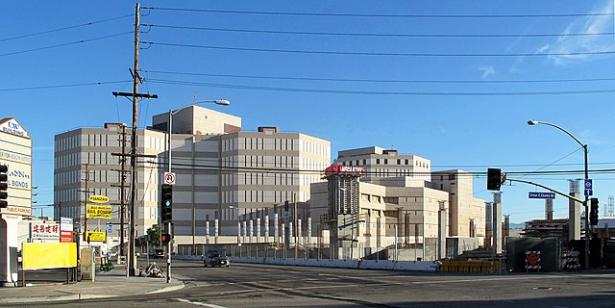 For more than half a century, 441 Bauchet Street has been the address where Los Angeles’ most stark social and environmental inequalities converge. It’s the location of L.A.’s Men’s Central Jail, the largest facility in the most populated county jail system in the country. On any given day, about 5,000 people are incarcerated there.

A block south from the jail is the 101 freeway, one of the most traveled highways in America, which generates dangerous levels of air pollution linked to a slew of birth defects. A block east is the L.A. River, home to at least 20 different pollutants, from feces to oil, at levels that violate federal standards. Another 100 yards east is the SP Railyard and Union Pacific Transportation Center, which operate at all hours, receiving big rig diesel trucks that spew an estimated 40 tons of particulate matter into the air annually.

According to data compiled by the Environmental Protection Agency’s environmental justice screening tool, those detained inside Men’s Central Jail are situated closer to toxic wastewater and hazardous waste than 96 percent of the country. Their lifetime cancer risk from the inhalation of air toxics is in the 100th percentile, meaning there is virtually no place in the country where it’s higher.

Men’s Central’s proximity to extreme toxicity isn’t an anomaly. A Grist analysis of the 11 jails in the three biggest county jail systems in America — Los Angeles, New York City, and Chicago — found that people residing within or surrounding eight of these facilities are in the 90th percentile or higher for pollution-related cancer risk, respiratory hazards, and diesel pollution exposure. Nine of the facilities are located closer to toxic wastewater than at least 97 percent of the country, and all 11 are in the 90th percentile or higher for proximity to hazardous waste.

None of this is accidental. New York City’s biggest jail, Rikers Island, was built on a former landfill. Now, its inmates reside in closer proximity to hazardous waste than 97 percent of Americans. Chicago’s Cook County Jail, located in the middle of Little Village, one of the most polluted communities in America, is home to more diesel pollution than virtually anywhere else in the country.

While formal research on toxicity and prisons has typically focused on more permanent detention facilities, such as state prisons, little has been done around jails because they’re seen as temporary holding facilities for people awaiting trial. But data show that it is common for some people, and particularly poor people, to spend months and sometimes years in county jail before ever being convicted of a crime. Cash bail requirements mean that people who can’t afford to put up enough money to be released on bail are often effectively serving a sentence while nominally awaiting trial.

For this reason, jails could be an emerging focus of the environmental justice movement. This is because environmental justice advocates focus on so-called “frontline communities” — places that shoulder a disproportionate burden of a society’s waste, contamination, and pollution. Louisiana’s “Cancer Alley,” for example, hosts many of the nation’s petrochemical plants, and its majority-Black residents see the effects show up in their health.

David Pellow, director of the Global Environmental Justice Project at the University of California, Santa Barbara, argues that those incarcerated in county jails constitute a frontline community equally worthy of the movement’s attention. But historically, Pellow says, those cycling through the detention system have been ignored in the environmental justice movement because they’ve been “viewed as populations who just do not matter.”

“Their fate is linked to ours, from the water systems that we are all drinking, to the air that we all breathe, to the land that we all live on,” he told Grist. “A jail wall is nothing but a wall — not much more.”

Indeed, patterns of incarceration lay bare the relationship between race, poverty, and pollution. We know that a history of discriminatory housing policies, like redlining, forced people of color to undesirable and often toxic parts of cities. Today, those same communities are more likely to be over-policed and in poverty, making people of color more vulnerable to pollution and criminalization. This social and environmental harm is then intensified when members of these communities are moved out of the toxic environments in which they live and into toxic facilities where they are held against their will.

“Black and brown and poor white folks in prisons and jails are clearly coming from communities where they are at greater risk for these social and environmental threats,” Pellow said. “Then they are being siphoned off, extracted, taken hostage by the state, and locked up in cages in the belly of this beast.”

Some research suggests that mass incarceration creates environmental harms that reach well beyond these marginalized communities. A 2020 study on how mass incarceration contributes to climate change found that increasing state-level incarceration rates between 1997 and 2016 were correlated with increases in industrial emissions and the use of toxic chemicals, because of the expansion of industrial prison supply manufacturing operations.

At the local level, some organizers in California have had success combining anti-detention and environmental justice organizing. Golden State organizers were able to block the construction of two jails in San Francisco in 2016 by framing the facilities as toxic burdens on the surrounding communities. In 2019, the Los Angeles-based Youth Justice Coalition and other community groups were able to stop a new jail after claiming the new building would worsen the community’s air pollution and potentially contaminate the surrounding soil and nearby water sources by disturbing two underground chemical storage tanks.

Through its “all jails are toxic” campaign, the group argues that jails “worsen things like traffic pollution and the degradation of natural resources,” leading to greater environmental racism in local communities, according to Youth Justice Coalition’s Emilio Zapién. The coalition contends that the money dedicated to incarceration could better be spent on measures to disrupt the need for jails, such as education, food, and jobs programs.

With a focus on sites of incarceration as points of environmental harm, Pellow hopes the environmental justice movement will be redefined to emphasize the collective need for transformative interventions for the most marginalized.

Grist is a nonprofit, independent, media organization dedicated to telling stories of climate, justice, and solutions. We aim to inspire more people to talk about climate change and to believe that meaningful change is not only possible but happening right now. The more we celebrate progress, the more progress we can make. This approach to solutions-based journalism depends on the support of our readers. Please join us by donating today to ensure this important work continues and thrives. Join Us

Adam Mahoney is an environmental justice fellow at Grist.