A new report puts into focus for the first time the scope of the state’s drinking-water problems and what it will take to fix them.

May 17, 2021 Tara Lohan The Revelator
Printer friendly
Over 600 Public Water Systems in California Communities Face Risk of Failure Published May 17, 2021 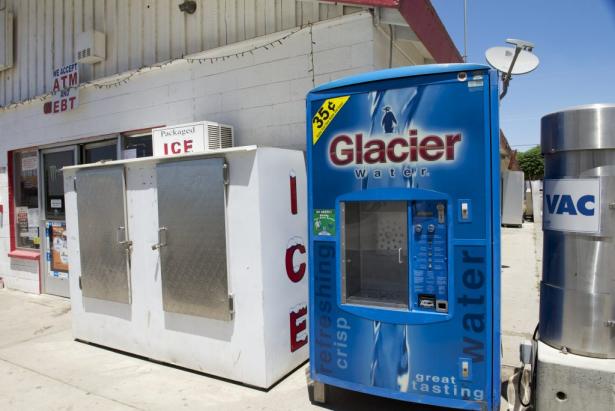 Some California residents rely on expensive bottled water because their tap water is unsafe., Tara Lohan

A familiar scene has returned to California: drought. Two counties are currently under emergency declarations, and the rest of the state could follow.

It was only four years ago when a winter of torrential rain finally wrestled the state out of its last major drought, which had dragged on for five years and left thousands of domestic wells coughing up dust.

That drinking-water crisis made national headlines and helped shine a light on another long-simmering water crisis in California: More than 300 communities have chronically unsafe drinking water containing contaminants that can come with serious health consequences, including cancer. The areas hardest hit are mostly small, agricultural communities in the San Joaquin and Salinas valleys, which are predominantly Latino and are often also places classified by the state as “disadvantaged.” Unsafe water in these communities adds to a list of health and economic burdens made worse by the ongoing pandemic.

California took a step toward addressing the problem back in 2012 when it passed the country’s first state law declaring the human right to water. That was followed by a 2019 bill to help meet that mandate by establishing the Safe and Affordable Drinking Water Fund.

But just how much cash is needed to address the problem?

The answer, we now know, is about $10 billion, according to a new “needs assessment” from state agencies and the UCLA Luskin Center for Innovation that provides a detailed look at the scope of the problem and cost of solutions.

“The study is unique in that it’s the first — certainly for California, but I think also for any state — that looks across every source for drinking water purposes that can be quantified,” says Gregory Pierce, the study’s principal investigator and an adjunct assistant professor of urban planning at UCLA. This includes all public water systems regulated by the Safe Drinking Water Act, as well as domestic wells and “state smalls” with fewer than 15 connections.

“I think this takes us many steps forward to better understanding where we need additional funding and what areas we should be focusing on in terms of proactively addressing at-risk systems,” says Michael Clairborne, directing attorney at the Leadership Counsel for Justice and Accountability, which works on water-equity issues in the state. “It also demonstrates that there’s still a real need for additional infrastructure funding for drinking water.”

So how bad is it?

The causes of the state’s drinking water woes are varied — and worrisome. Nitrate, mostly from farms and dairies, is the costliest water contaminant, the study found. Nitrates are especially dangerous for infants, and can cause lethargy, dizziness and even death. Other groundwater contaminants include bacteria from leaking septic systems and uranium, which can cause kidney damage. Several other contaminants have been linked to cancers, including the industrial pollutant chromium-6, the pesticide 1,2,3-trichloropropane, and human-made and naturally-occurring sources of arsenic.

The study looked at 2,779 public water systems across the state and evaluated their water quality, affordability, accessibility, and technical and financial capacity. It found that 326 public water systems qualified as “human right to water communities” — the ones where water systems are consistently failing to provide affordable, safe drinking water.

For anyone tracking this issue (or living in these communities), that part wasn’t news.

But the report also found that another 617 public water systems are at risk of failing. Virtually every county in the state had at least one system on this list, but those with the highest numbers were in rural areas with large numbers of smaller water systems, including Tulare, Fresno, Monterey and Kern counties.

“What’s really novel is that it also tries to comprehensively assess where our water quality is likely to fail next if nothing is done to prevent it,” says Pierce.

And that should be a big wake-up call.

“This is the next logical step to try to get a handle on the drinking-water crisis in the state,” says Clairborne. “We really have to proactively address these high-risk systems before they fail, provide them the support they need, and potentially consolidate high-risk systems with nearby systems to improve sustainability.”

The research also found that almost one third of domestic wells (78,000) are at high risk of failure, as are half of California’s 1,236 state small systems.

And it highlighted another critical issue, too: money.

“The report reinforced what we unfortunately already know too well — that California is facing a major water affordability crisis,” says Jonathan Nelson, policy director of the Community Water Center. “Nearly 1 in 3 water systems were identified either as having water rates that were higher than what is deemed affordable for families or high levels of water shutoffs.”

Unsafe drinking water comes with an additional economic burden: Many families are also forced to spend more money on bottled water, with some spending as much as 10% of their monthly income on water, according to the Community Water Center.

One of the main reasons for persistently unsafe water has to do with scale: Larger water systems have more resources to fund treatment technologies, while small systems often lack the resources to meet water-quality challenges.

Getting those struggling water systems more funding to upgrade their water-treatment systems can help. But those technologies need ongoing maintenance, and often the most cost-effective measure is consolidation. Small water systems or homes on domestic wells can be connected to larger systems that can better treat contaminated water sources.

Historically the state hasn’t been that good at consolidation because many larger water providers didn’t want to take on small, failing systems. But in 2015, Senate Bill 88 granted the California State Water Resources Control Board authority to mandate consolidation for failing water systems. Now another bill, Senate Bill 403, would expand that to include systems at risk of failure.

“That would help to address the needs of those nearly 620 at-risk water systems, as well as state small systems and domestic wells,” says Clairborne. “The state has made some progress in the last few years, with several hundred consolidations since 2015, compared to fewer than 200 for the 40 years prior.”

When it comes to addressing the affordability crisis, Nelson says the state legislature can take action to establish a water rate assistance fund, which is especially important now because “California families are carrying $1 billion in pandemic-caused water debt,” he says.

The report also found that a broader, more regional look at potential solutions could cut costs. In one example outlined in the study, if 85 small water systems in Monterey County are incorporated into a nearby larger system, the cost for each new connection falls from $39,000 to $7,000.

“If we can prioritize those [regional solutions], the cost could come down considerably, and our infrastructure would be much more integrated,” says Pierce.

Bringing costs down will be key, as the price tag for implementing interim and long-term solutions for water systems and domestic wells that need assistance over the next five years is upwards of $10 billion. Some efforts are already underway to address paying for that, with allocations from the state and contributions from local governments, but that still leaves an estimated $4.6 billion shortfall, according to the report.

“Unless addressed, this funding gap will perpetuate the divide between those who have safe water in California and those who don’t,” says Nelson.

More money is needed from either the federal or state government, says Pierce. And even though the price tag seems steep, he says, the costs of not fixing the problems will be higher in the long run and bring a lot more suffering to communities.

“Unsafe water can not only cause physical health impacts, it can also cause a lot of direct affordability impacts and mental health stressors on people,” says Pierce. “One way or the other society pays for this and it’s better to invest up front — from a human right and equity standpoint, and also from an economic one.”

One recent bright spot is the potential for more spending at the national level, with the Biden administration’s current discussions around a major infrastructure bill in Congress.

That could represent a paradigm change. “The federal government’s role in funding drinking water infrastructure has dropped dramatically since the 1970s compared to other types of infrastructure,” says Pierce.

Even if such investments do come from Washington, though, they won’t solve all of California’s water problems.

“I hope it can be a substantial amount of what we need, but I would be very surprised to see it meet the whole need,” he says. “I think that much of what would be allotted to California would likely go to larger systems for broader infrastructure investments and drought-related resilience.”

Additionally, a lot of the bill’s equity focus is on lead. “Which I don’t disagree with, but California doesn’t have nearly as big of a lead problem in drinking water as many other states,” he adds.

The fact that California has already done the work to understand its drinking-water problems, identify solutions and tally the costs can make the process of getting federal dollars easier — and that could also help inspire other states to better quantify their water needs.

“I do think you’ll see more states do this, but it was a considerable effort: The water board basically created a new unit with multiple staff to do this work,” says Pierce. “But most of the data was the water board’s own, so I think a lot of this could be done by other states without too much effort, if they can learn from what was done here and maybe even enhance that.”

Money to shore up water systems, improve affordability and ensure clean water for all residents also comes with a ripple effect of benefits.

“Investments in water projects can help create drought and climate resiliency,” says Nelson. “And water investments can be an engine of equitable economic growth, creating good jobs in communities that need them. We have a tremendous opportunity to both address this public health crisis and help our economy recover at the same time.

Tara Lohan is deputy editor of The Revelator and has worked for more than a decade as a digital editor and environmental journalist focused on the intersections of energy, water and climate. Her work has been published by The Nation, American Prospect, High Country News, Grist, Pacific Standard and others. She is the editor of two books on the global water crisis.

The Revelator, an online news and ideas initiative of the Center for Biological Diversity, provides editorially independent reporting, analysis and stories at the intersection of politics, conservation, art, culture, endangered species, climate change, economics and the future of wild species, wild places and the planet.

Our aim is to: