A plan of a committee convened by the AFL-CIO, Teamsters and Service Employees International Union aims to encourage police union members "to speak up and take action if fellow members are violating their professional oath or abusing their power." 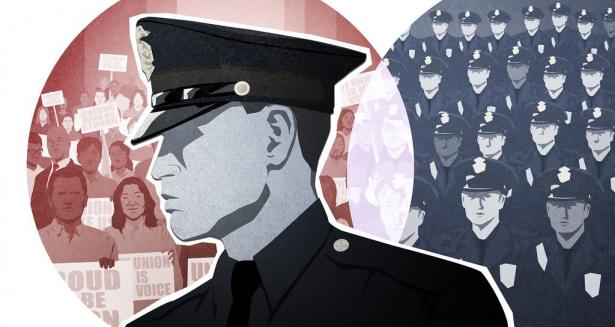 In response to the police killing George Floyd, 15 unions that represent law enforcement officers across the US have endorsed a blueprint for policing that includes an unprecedented shift in the way unions protect bad police officers, according to a copy of the plan obtained by CNN ahead of its release this week.

Floyd's death last May brought renewed attention to the idea of "active bystanders," a relatively new concept in law enforcement which calls for officers to intervene when they see wrongdoing. Other industries and trade unions have developed industry- or union-specific programs aimed at achieving the same goal: teaching colleagues to intervene when they see another worker behaving poorly or making mistakes.

A committee convened by the AFL-CIO, International Brotherhood of Teamsters and Service Employees International Union Friday approved the plan that calls on more than 250,000 law enforcement members and more than 100,000 members in police-adjacent professions to intervene when another union member is doing something wrong.

Unions still have a responsibility to represent members they believe are wrongfully accused, but the framework challenges local unions to look at the merits of an officer's actions when considering whether to defend them.

The program will "empower local union members to speak up and take action if fellow members are violating their professional oath or abusing their power, and ultimately helps the union weed out wrong-doers from union membership," according to the document.

"We'll represent you, we'll be there for you, absolutely. Unless you don't hold up your end of the bargain," said Lisa Titus, who was part of the committee that wrote this plan. "But we'll also hold you accountable. It is a big shift, and it's going to take some time."

Officers in these unions have enjoyed near-absolute union solidarity for decades, but a national reckoning over policing, prompted by the deaths of Floyd and Breonna Taylor at the hands of officers, led many to question whether police unions should even exist. A plan produced by the union committee is their attempt to address problems in their ranks without waiting for police department leadership or elected officials to take the lead.

"This is a huge step for law enforcement to take, and for unions to take," said Fred Redmond, who led the task force that approved this plan. "But at this moment, regarding this profession, I'm not gonna say it's on life support, but we've lost confidence of the public in many areas throughout the country."

The Fraternal Order of Police, an organization which represents 356,000 members in more than 2,100 lodges across the country, was not involved in developing this plan. John Paul Smith, a United Steel Workers staffer who was a police officer for four years and who worked on this project, said that local FOP leaders' "incendiary rhetoric" made labor's job more difficult over the last year.

Jim Pasco, executive director of the national Fraternal Order of Police, declined to comment on the plan. "I'm fascinated by this but don't have anything to say about it," he said.

'Another tool in keeping communities safe'

Within law enforcement, departments across the country have adopted a model of intervention developed by a psychology professor working with the New Orleans Police Department. Georgetown Law school developed a program based on that, which launched after Floyd's death.

The New York Police Department, along with the departments in Denver and Baltimore, have committed to the Georgetown model, but what the unions are proposing would only apply to their members.

Between the two efforts, hundreds of thousands of officers could receive bystander training or see their conduct governed by a model of training that asks officers to challenge each other on the job.

Floyd's case is the most glaring example of where an intervention could have saved someone's life. He struggled, said he'd comply, said he couldn't breathe, begged for his mother and died while officers watched or turned their backs to the officer on Floyd's neck.

After Floyd's death,the AFL-CIO, Teamsters and SEIU convened a Racial Justice Task Force and built out five labor-specific committees. One focused on policing and produced a report, called "The Labor Movement's Public Safety Blueprint for Change."

"There is broad agreement among organized labor that meaningful public safety reforms are needed, and we must re-imagine the construct and relationship that law enforcement has with the communities we serve," the committee wrote. "Public safety professionals, and our unions, have a duty to call out the wrong-doers and actions that harm people in our communities and, in doing so, the integrity of our profession. We can no longer stand idly by, or defend transgressors, when those who fail to uphold their oath and duty take actions that stain the work of law enforcement."

The committee that developed this blueprint will continue meeting, officials said. They're tasked with developing a plan to implement the program that's consistent with union rules.

Officials acknowledge this program won't likely alter the course of police shootings that capture the public's attention once video is released. But over the long term, the culture change could lead to a change in the smaller, less consequential interactions between police officers and the public that go a long way toward shaping attitudes toward police.

Lisa Kurtz, who oversees the Georgetown Law intervention program, said their system isn't a way to solve every situation. The program is called the Active Bystandership for Law Enforcement (ABLE) Project.

"We know there's not always an opportunity to intervene," she said. "But a lot of times those situations with tragic results (are) preceded by smaller interactions where someone could have stepped in but didn't. What we know is when smaller wrongdoing is left unchecked, it tends to not only continue but escalate."

Union members' behavior and job performance is typically governed by contracts that spell out employer and employee obligations, and members benefit from the knowledge that they have the moral support of their union brothers and sisters who won't side with or help managers in almost any dispute.

"I don't think that culture is isolated in law enforcement, and not in unions. That's part of American culture: no one wants to be rat," said Smith, the United Steel Workers staffer and ex-police officer.

"But I would say union police officers today have a choice -- change their culture or watch their rights get legislated out of existence," Smith said. "That's a choice unions have to make. Our group has made the choice that we want to make efforts to change the culture."

The model of intervention trained by Georgetown Law originated in New Orleans, where after Floyd's death deputy chiefs went to roll calls to ensure police officers knew how to intervene not just on each other but on supervising officers.

The unions developed their model independent of the Georgetown Law program, which requires officers of all ranks in a department to buy in. But they aspire to the same thing, which is for officers to work in safer and more professional ways.

"(We've) worked with social scientists, civil rights activists, police officers, police commissioners, community organizations, a whole host of very smart folks, to put together this training," Kurtz said. "We focus on empowering officers to intervene in each other's actions that might cause harm to themselves, to other officers or to communities. It's another tool in keeping communities safe and officers safe."

'Not trying to be the tattletale squad'

The union framework wouldn't seek to alter or change any department rules regarding what members have a responsibility to report, and it wouldn't involve police department supervisors.

"We can't hold our nose or ignore what's happening right now. When you have really bad things going on, that are clearly, clearly irresponsible, are not what police stand for in general, you got to deal with it," said Lee Saunders, president of the American Federation of State, County and Municipal Employees. "The union has to play a role, you got to do it for the benefit of the officers trying to do their jobs every single day under difficult circumstances. And you've got to deal with those who take advantage of the situation."

Smith said the union could choose not to defend someone if the accusation against an officer has "complete merit." The goal of the program is to avoid that through union member to union member pressure.

Redmond, leader of the task force that approved the blueprint, said there are some officers who shouldn't be officers. And though hiring and employment screening is the responsibility of police department leadership, labor doesn't have faith in them to do that job well.

"If a person is a repeat offender and incorrigible, that's when the support of the union has to come into play," he said. "If we have a repeat offender, we may have to consult with (lawyers), to really have serious discussions about what we can do within the boundaries of labor law, the constitutions and bylaws of our unions, to really bring some pressure on this person if he proves to be incorrigible."

Officials acknowledged they'd likely encounter a mix of confusion and resistance as the plan is rolled out, and the success of the program will hinge on details of how it's implemented that haven't yet been worked out. Police officers sometimes resist change.

"We're not trying to be the tattletale squad on every little thing that happens on the job, but the point is you establish a set of standards and expectations of what it means to be a union professional, and when members see something doesn't comport, they have a process in place that can remedy that," said Liz Shuler, who co-chaired the union committee. "Right now, 95% are sitting silently back while 5% don't do right by union values. This empowers the 95% and reclaims the notion of what it means to be a professional."