A new first-of-its-kind study of DNA recovered from preserved human feces suggests that over the past thousand years the human gut has experienced an “extinction event,” losing dozens of species and becoming significantly less diverse. 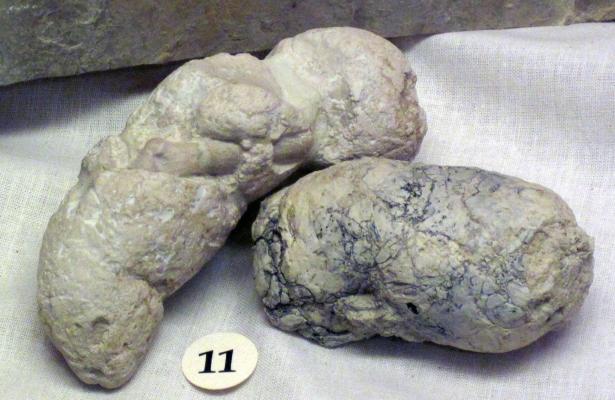 "Coprolites" by James St. John,licensed under CC BY 2.0

Every meal you eat is digested with the help of the bountiful bacteria thronging your intestines. When you're done digesting, those bacteria are also part of what's excreted. Now, 1000-year-old piles of dried-out poop are offering insights into how the billions-strong bacterial ecosystems in the human gut have been altered by sanitation, processed foods, and antibiotics.

In a study published today in Nature, researchers analyzed ancient DNA from coprolites, or preserved feces, found at the back of rock shelters in Utah and Mexico. The data give scientists their first good look at ancient gut bacterial communities, says Stanford University biologist Justin Sonnenburg. “These paleofeces are the equivalent of a time machine.”

They suggest that over the past millennium, the human gut has experienced an “extinction event,” losing dozens of species and becoming significantly less diverse, says lead author and Harvard Medical School microbiologist Aleksandar Kostic. “These are things we don't get back.”

Previous studies have used the gut bacteria of today's hunter-gatherers and herders as a proxy for the ancient microbiome. Their microbial diversity far exceeds that of people in industrial societies, and researchers have linked low diversity to higher rates of “diseases of civilization,” including diabetes, obesity, and allergies. But it wasn't clear how much today's nonindustrial people have in common with ancient humans. “We really wanted to be able to go back in time and see when those changes [in the modern gut microbiome] came about, and what's causing them,” says Harvard University geneticist Christina Warinner, a co-author on the paper. “Is it food itself? Is it processing, is it antibiotics, is it sanitation?”

An international team analyzed eight ancient coprolites preserved by dryness and stable temperatures in three rock shelters in Mexico and the southwestern United States. Researchers radiocarbon dated the samples, some of which were excavated almost 100 years ago and stored in a museum, to between 0 C.E. and 1000 C.E. Meradeth Snow, a molecular anthropologist at the University of Montana, Missoula, then rehydrated tiny bits of feces, recovering longer DNA strands than previous paleofeces analyses.

Earlier attempts to analyze the ancient gut microbiome had been thwarted by the challenge of sorting ancient gut bacterial DNA from that of microbes invading from the surrounding soil, says Marsha Wibowo, a Ph.D. student at Harvard's Joslin Diabetes Center, who analyzed the DNA. She singled out the ancient gut species by focusing on DNA that had been damaged by time, and on sequences from bacteria known to be associated with the mammalian gut. Some of the ancient DNA was unfamiliar, however, evidently representing never-before-seen kinds of extinct bacteria.

The coprolites yielded 181 genomes that were both ancient and likely came from a human gut. Many resembled those found in nonindustrial gut samples today, including species associated with high-fiber diets. Bits of food in the samples confirmed that the ancient people's diet included maize and beans, typical of early North American farmers. Samples from a site in Utah suggested a more eclectic, fiber-rich “famine diet” including prickly pear, ricegrass, and grasshoppers.

But the ancient microbiomes also stood apart from their modern counterparts, for example lacking markers for antibiotic resistance. And they were notably more diverse, including dozens of unknown species. “In just these eight samples from a relatively confined geography and time period, we found 38% novel species,” Kostic says.

Treponema bacteria, for instance, are virtually unknown in the industrialized gut microbiome and appear only occasionally in people living nonindustrial lifestyles today. But, “They're present in every single one of the paleofeces, across all the geographic sites,” Kostic says. “That suggests it's not purely diet that's shaping things.” He hopes future experiments on coprolites from other time periods will make it possible to isolate when the biggest shifts took place and what prompted them.

The findings echo another study of much older samples by Warinner and colleagues published this week, which reported DNA from previously unidentified microbes on the teeth of Neanderthals and early modern humans.

The new data from old poop show no one on the planet today has been spared changes to their microbiome. “Nonindustrial populations, including their microbiomes, shouldn't be considered proxies for our ancestors,” says Massachusetts Institute of Technology geneticist Mathieu Groussin.

The findings also suggest we've lost a lot of microbial helpers in the recent past, and our bodies may not have had time to adapt. “This study gives us a gold standard to check on what species we've lost,” Sonnenburg says.

Because feces aren't considered human remains under U.S. law, Warinner says, there was little discussion early on about the ethics of the research. But when the group reached out to several dozen tribes in the Southwest, some said the samples were a link to their ancestors and were upset they hadn't been consulted earlier. The study now includes an ethics statement, a first for a paleofeces paper.

University of California, San Diego, geneticist Keolu Fox says the team didn't go far enough. Insights into the ancient gut could someday inform commercial efforts to reshape modern microbiomes, he says. That raises complex questions of who owns such data. “It's supposedly waste, but it contains DNA and profiles of microbial diversity. Maybe that poop is literally gold,” Fox says. “We're getting into a whole new gray area.”