The Disney cartoonists and animators’ strike that began at a California studio on May 29, 1941, forever changed the labor standards of an industry — and inspired cultural workers to take greater ownership over their labor. 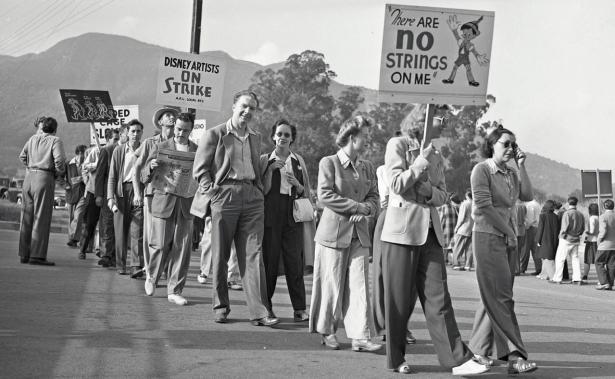 Disney artists strike outside their California studio in 1941., Cartoon Brew

This wasn’t your average picket line. “It’s up to Walt to call the halt,” read a striking worker’s picket sign beside a picture of Mickey Mouse. Another featured an image of Pinocchio saying, “There are no strings on me.”

Walt Disney snarled at strikers as he walked into his Burbank studio; workers in turn hollered back. Workers that crossed the picket line were called “finks” and “scabs,” while those on strike were dismissed as “Commies.”

While Walt Disney’s dalliances with antisemitism have become common knowledge in recent years, his abusive labor practices are less widely discussed. Eighty years ago today, picket lines destroyed the facade of the magical world of Disney. The strike by Disney cartoonists and animators on May 29, 1941, forever changed the labor standards of an industry — and inspired a segment of cultural workers to take greater ownership over their labor.

“Do Something About It”

Just a few years before the strike, Walt Disney enjoyed not only commercial success but a relatively happy workforce. Snow White and the Seven Dwarfs, which premiered in December 1937, was a box-office smash. Disney’s work was compared to Charlie Chaplin’s in terms of its importance for American culture.

Disney artists were among the best paid and enjoyed a familial, if paternalistic, work environment. Disney made it a practice to share 20 percent of his profits with employees as bonuses. The studio even had an internal art school to train its own animators. Most Disney animators viewed themselves as a class above the rest in their field.

World War II dramatically changed the situation. In 1937, Disney started constructing a studio in Burbank, California, financed on credit with the assumption of continuous success. But the war destroyed the European market for his films. Pinocchio and Fantasia were box-office failures in 1940, and Disney was soon $4.5 million in debt. 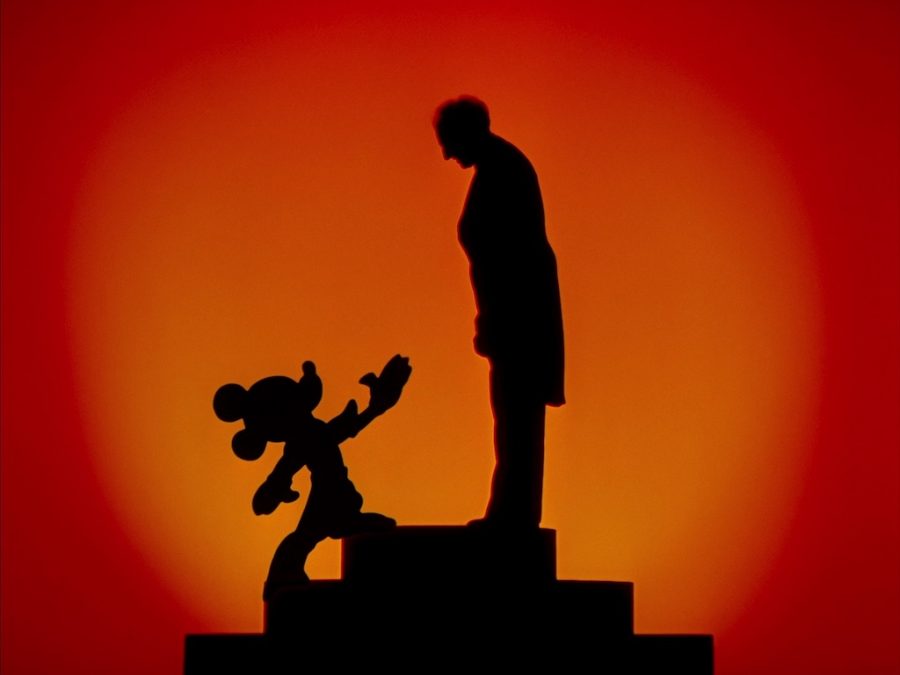 He sought to recoup these losses through ramping up pressure on his workers. The intimate, familial environment was quickly gone from the studio in Burbank. Strict hierarchies were established, with most benefits only going to the highest-paid and more established artists. Most new artists did routine dull tasks and received $20 per week, while the senior artists got to do more creative work and could make up to $250 per week.

Workers were also forced to sign documents claiming they only worked forty hours a week, when they in fact worked much more. And cartoonists wanted professional screen credits for their art, as they claimed Disney often took credit for their work.

In a 1991 interview, animator Willis Pyle said of the time, “I felt that the union was necessary because there was no rhyme or reason as to the way the guys were paid. You might be sitting next to a guy doing the same thing as you and you might be getting $20 a week more or less than him.”

In January 1941, the Screen Cartoonists Guild (SCG), led by Herb Sorrell, began meeting regularly at the Hollywood Hotel to gather grievances and plan an organizing drive. SCG organizers felt that organizing Disney would also help force the hand of other studio union holdouts like MGM. Oblivious to the depths of the workers’ discontent, Walt Disney’s response only further strengthened the unions’ position.

In February, all studio workers were called to an auditorium by Disney. He explained that due to his debts, he couldn’t increase wages. His artists would need to work quicker to increase their output. This was accompanied by a condescending reminder that his workers still had it good, as he offered training, vacations, and paid sick time. Many of the newer employees left the meeting calling the speech a “sob story.”

By this time, Art Babbitt, one of Disney’s top animators, was playing a leading role in the union drive. He was responsible for iconic Disney characters like Goofy, the evil stepmother in Snow White, and Geppetto in Pinocchio. Previously he had been an executive in Disney’s sham company union, the Federation of Screen Cartoonists. Company unions such as these were often used by employers to co-opt worker discontent and falsely claim to represent them.

Babbitt became frustrated at the inability to make change from that position. As a more senior artist, many of the grievances didn’t personally affect him, but he was driven by loyalty to his coworkers and a sense of principle. Walt viewed Babbitt’s union activity as a personal betrayal. 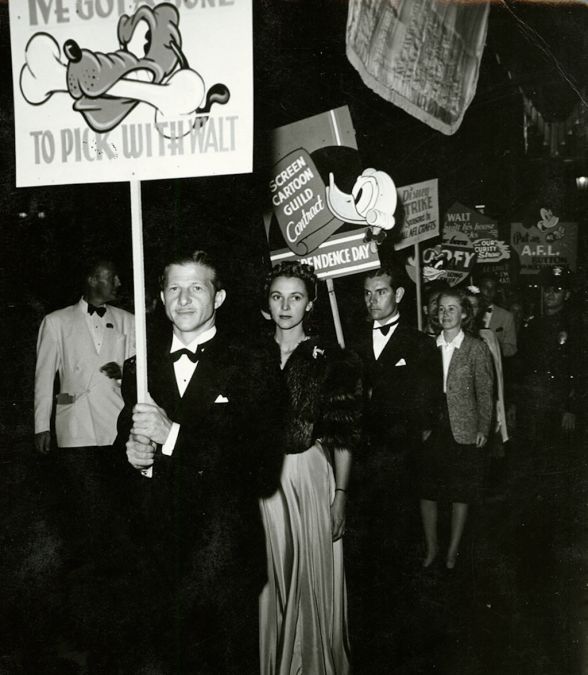 Art Babbitt leads a picket at the premier of The Reluctant Dragon. (Cartoon Brew)

As the union drive gathered steam, Disney assembled all his workers again for another lecture. He remained intransigent and reiterated his position that anyone who wanted to advance at the company had every opportunity to do so.

“Put your own house in order. You can’t accomplish a damn thing by sitting around and waiting to be told everything. If you’re not progressing as you should, instead of grumbling and growling, do something about it,” Disney told them. Workers yet again left the meeting furious — and even more motivated to join the Screen Cartoonists Guild.

The last straw came when Disney fired Art Babbitt and twenty-three other cartoonists. Union leader Herb Sorrell wanted to lay the groundwork with more organizing before calling a strike, but the enraged workers didn’t want to wait. The strike began on May 29, during the production of Dumbo.

Only about half of the one thousand cartoonists walked out. Still, on day one, Disney took pictures of the picket line and enlarged the photos for workers who came into the studio. He made sure they knew that he was aware of every individual striker and would be able to know those that joined them in the future. Seemingly unmoved by the workers’ escalation, he continued asserting that the workers were already fairly represented by the company union.

Many of the workers had no experience in the labor movement and simply didn’t understand how intense the conflict would become. Animator Jack Kinney remembers, “those of us who crossed the picket line were in shock. We were naive, having never been exposed to the workings of capital and labor.”

Outside the studio building, the picket lines assumed a carnivalesque character. Cartoonists poured their creative energy into making signs and anti-Disney puns. Sorrell recalled in the PM newspaper, “It was particularly picturesque because these artists insisted on depicting everything in their picket lines . . . it was their duty when off the picket line to make gags and signs.” 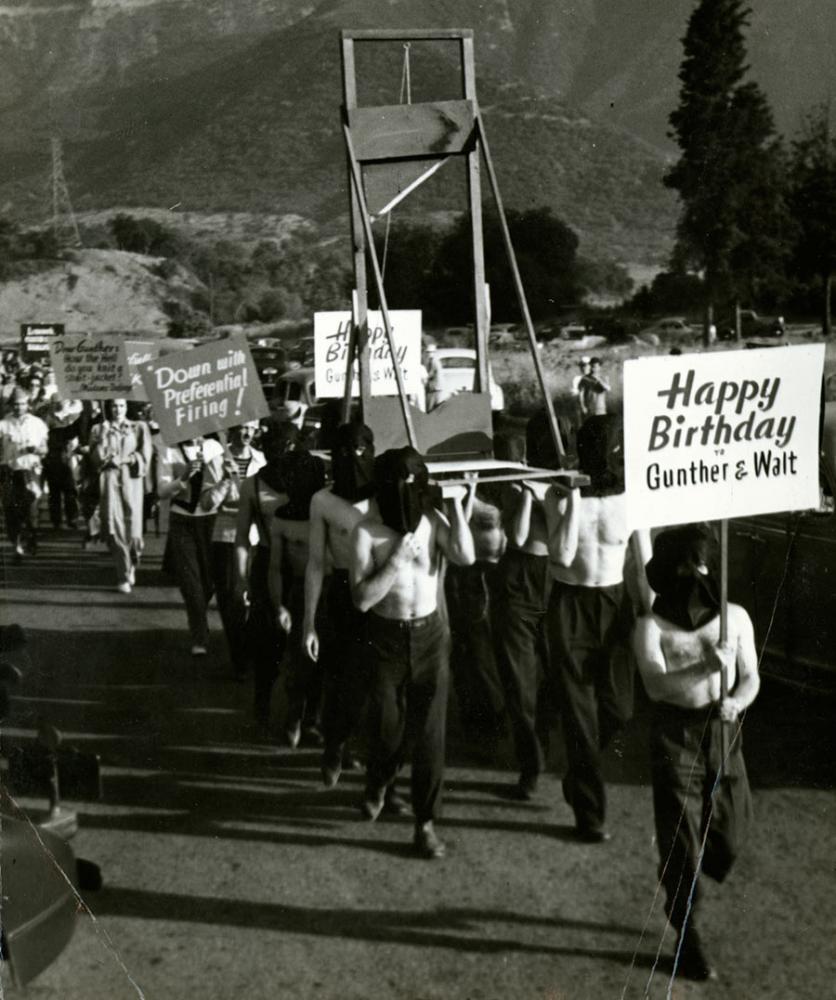 Picketers carry a mock guillotine, which they use to behead a Walt Disney mannequin. (Cartoon Brew)

Solidarity poured in from other unions in the entertainment industry. The Society of Motion Picture Film Editors supported the strike by refusing to process Disney films at the Technicolor, Williams, and Pathé labs. Supporting organizations such as the League of Women Shoppers and Film Audiences for Democracy picketed theaters showing Disney films. Cartoonists returned the solidarity to other unions, for example making picket signs for the United Auto Workers North American Aviation strike in Los Angeles.

As the strike wore on, Disney became increasingly bitter and viewed the whole event as a personal assault. Despite there being very few leftists in the SCG, Disney published a letter in Variety claiming that “Communist agitation, leadership, and activities have brought about this strike.”

An opportunity to remove himself from the strike arose when the Rockefeller Commission for the Development of Cultural Relations with South America made Disney a “Goodwill Ambassador,” taking him on a tour throughout the continent. But his troubles continued. SCG business agent Bill Pomerance reached out to the National Maritime Union and was given contacts of all union leaders in the cities Disney was scheduled to visit.

Pomerance sent a telegram to the US State Department saying, “Labor organizations in South America are being contacted and arrangements are being made to picket the Disney tour and his pictures. . . . The State Department should insist that the Disney company comply with American standards of fair treatment of labor . . . before permitting Disney to represent the United States as a goodwill ambassador in South America.”

This move forced the hand of the government’s Labor Conciliation Service, which stepped in and called both sides to Washington, DC, to work out an agreement. The settlement was an overall victory for the union and included the permanent reinstatement of the twenty-four employees fired before the strike, equalization of pay, a clear system of salaries and classifications, and a grievance procedure.

The 1941 strike forever changed the labor standards of the animation industry. For many of the younger artists, their salaries doubled overnight, and a forty-hour workweek was established. From then on, animators received screen credits for their work as well as pensions and health insurance benefits.

The strike also opened up new horizons for the organization of cultural workers and the social impact of cartoon animation. In the wake of the strike, George Sorrell formed the Conference of Studio Unions, which challenged the status quo of Hollywood labor by uniting workers of various crafts.

The young animators who participated in the strike were of the generation molded by the Great Depression. They viewed their art through the lens of class consciousness and advancing a broader social vision. Some of them had come together in the late 1930s in a small Communist Party cartoonists’ group.

These radical cartoonists were heavily influenced by Soviet modernism. David Hilberman, a Disney layout artist, studied at the Leningrad State Theater in 1932. Left-wing John Hubley recalled in an interview, “A Russian cartoon showed up on the Disney lot one day, brought by Frank Lloyd Wright. It was very modern, with flat backgrounds, highly stylized characters, modern music. It was very exciting and had a big influence on me.” 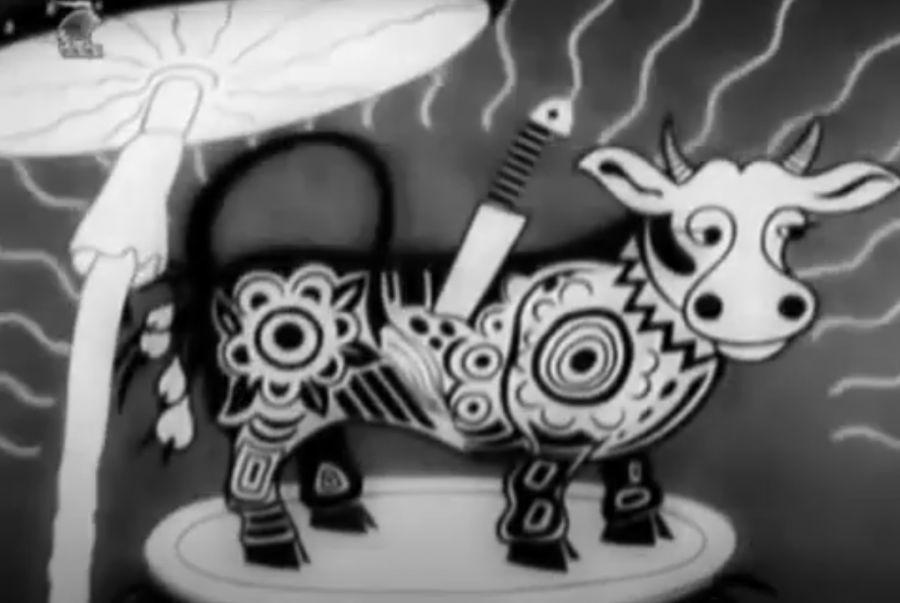 Still from The Tale of the Czar Durandai (1934), the film that Frank Lloyd Wright introduced to John Hubley.

Hubley outlined his ideas for radical animation at the UCLA Writers’ Congress in 1943. He proposed that animation should follow the path of Charlie Chaplin, who “utilized essentially the same abstract symbolism that cartoons have continually used,” but whose “stories have been written in terms of human behavior and broad social caricature.”

These same cartoonists mobilized as cultural workers for both the war effort and the New Deal coalition, forming the United Productions of America studio in 1943. In 1944, Hubley was contacted by the United Auto Workers Education Department about producing an animated campaign film for the 1944 presidential election. The result was Hell-Bent for Election, which one UAW local education director described as “very powerful . . . in organizing and effectively working toward the re-election of President Roosevelt.”

In preparation for Operation Dixie, the labor movement’s ambitious push to organize the South, the UAW tapped Hubley again to work on the fascinating animated short Brotherhood of Man, which sought to educate working people about race as a social construct.

These initiatives were reflective of an age when upsurges in industrial unionism imbued artistic workers with a greater sense of their own power and social responsibility. As the culture industries increasingly dominate everyday life under neoliberalism, this perspective is needed now more than ever.