Pandemic relief measures are hobbled by serious failures of program design and implementation.

July 28, 2021 David Dayen The American Prospect
Printer friendly
The Poor Aren’t Getting the Help Democrats Want to Give Them Published July 28, 2021 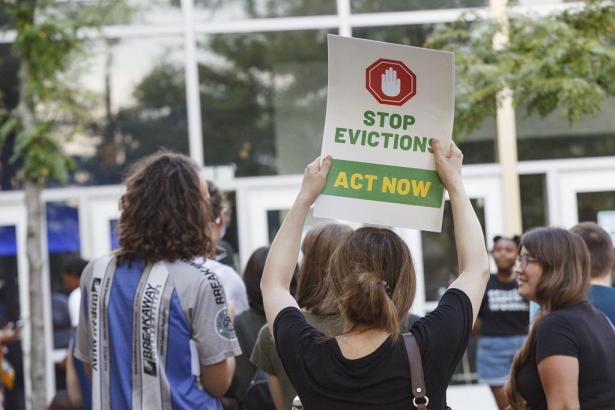 People rally for housing reform in Columbus, Ohio, June 30, 2021. A federal eviction moratorium is set to expire at the end of this month., STEPHEN ZENNER/SOPA IMAGES/SIPA USA VIA AP IMAGES

One of the oldest clichés in the book is that Washington political elites live in a bubble, insulated from the hardships of the outside world. That’s definitely what came to mind when I saw a Treasury Department press release touting success with the emergency rental assistance programs advanced in two separate coronavirus relief bills.

“June Emergency Rental Assistance Resources to Households More Than All Previous Months Combined,” the headline blared, highlighting the more than $1.5 billion in payments delivered, and triple the number of households helped relative to April. It sounds like a real achievement if you don’t know the denominator; that is, the total amount of rental assistance Congress approved in relief bills last December and this March. That number is $46.5 billion, which means that the June total amounted to a little over 3 percent of available funds.

It’s a simple math equation to get to what Politico figured out, that in the first six months since rental assistance was made available, only 6.5 percent of the funds have been distributed. At this rate, the money would dribble out between now and 2028.

Renters don’t have that kind of time. Next Saturday, July 31, the federal moratorium on evictions expires, and the Biden administration opposes an extension. In a world where rental assistance is flowing and the economy booming, policymakers could rest easy that a spurt of evictions will not ensue. But that reality only exists on charts and unofficial estimates.

In the real world, the assistance spigot has turned from completely dry to only a few drips at a time. Around 7.4 million Americans are behind on rent, but the assistance program has helped around 600,000. Tenants have been unable to access rental assistance for a variety of reasons. First of all, it’s a completely decentralized program; every locality must build from scratch its own process for getting the money out. Each initiative varies widely on verifying rental debt and placing paperwork burdens on the renter, and some give landlords discretion on whether to accept the assistance. If they would rather kick out the renter and bring in someone else at higher rent, they can reject it.

The real world of bureaucracy in programs like this seems to be the last thing policymakers think about when designing programs that actual Americans have to use. If nobody can access the relief, why pass the law at all? Simplicity in program design is rare, and public awareness often low. This is precisely why voters often view government as out of touch, and it doesn’t need to be this way.

Take the advance payments of the Child Tax Credit, which began to flow this month. If you’re already known to the Internal Revenue Service, this program is a model of simplicity: The money just showed up in your mailbox or bank account. For those who have gotten the payments, it has been in some cases life-changing and life-affirming.

But the people most in need of between $3,000 and $3,600 in advance tax credits per child are poor people who do not file federal taxes, and therefore aren’t on the IRS’s existing lists.

This amounts to seven million children, and the government has not done a good job in finding them and signing them up for the program. Barely 1 in 10 have made themselves eligible, according to The Washington Post. That’s probably because there’s been scant public education about it; the main outreach from the government to sign people up is merely a portal for non-filers at the IRS website.

Aside from it being not very user-friendly, bad on mobile, and not available in Spanish, throwing up a website by itself is a poor substitute for actual outreach. The only physical outreach to ensure sign-ups has been undertaken by volunteers with nonprofits. Absent a real, heavily resourced campaign, how will people know the IRS’s non-filer website exists? Will they be able to navigate through it? Put it this way: Consumer brands that need to find customers for their very survival do not spend their entire marketing budgets on a single website.

There were other options for setting up the CTC payments. You could have run it as a welfare benefit through the Social Security Administration, which has 1,500 retail offices throughout the country. You could have paid canvassers to get sign-ups, and navigators to help with the website.

Instead, Democrats’ main reaction to the low take-up of non-filers has been to dismiss it. “I went on the website myself,” Senate Majority Leader Chuck Schumer (D-NY) told HuffPost. “It’s very simple and easy to do as long as your kids have a social security number.” This assumes that the families in question (a) have a computer (the site is almost nonfunctional on mobile), (b) have internet access, and (c) have knowledge about filling out online forms. It’s the height of hubris and a denial of reality to just assume that people on the wrong side of the digital divide will figure everything out.

But wait, policymakers might say, we fixed the internet access problem. In the American Rescue Plan, they created an emergency broadband benefit that gives low-income people up to $50 a month to purchase high-speed internet service. Well, since its inception, just 1 in 12 eligible people have enrolled in that benefit, according to data reviewed by the Benton Institute for Broadband & Society.

These numbers are remarkably consistent: Over the past year, when the U.S. establishes a benefit for low-income or struggling people, about 90 percent or more tend to miss out on it. That’s true of rental assistance, the Child Tax Credit, and emergency broadband assistance. It may also be a factor in vaccination rates, a critical issue with the emergence of the delta variant. It turns out that vaccine take-up is strongly correlated with income.

One reason why: Many low-income workers in America have no sick days and would lose their jobs if they missed a day of work. And they fear being put out by vaccine side effects for a day and risking their next paycheck. The government simply did not include paid vaccine recovery days as part of any of the relief bills.

Meanwhile, the delta variant and the concurrent spike in COVID cases have raised concerns for economic recovery. First-time unemployment claims increased last week, and while lockdowns of the variety of last year are unlikely, lagging demand from frightened consumers could pinch in-person establishments like restaurants. Yet because we have tied relief efforts to certain dates rather than economic conditions, things like the eviction moratorium and the pause on student loan payments and payments to small businesses have expired or will do so soon.

It is very good that the Democratic majority wants to provide more aid to the poor and disadvantaged. That alone is a sea change from years past. But it seems like nobody tries to assess how these programs operate when making contact with ordinary people.

Access, implementation, and design are as critical to improving the lot of at-risk communities as appropriating the money. There’s a failure to think through the challenges and find ways around them. Believing that you can get billions of dollars in welfare payments out the door by putting up a website, or that you can protect delinquent renters through some brand-new form that needs to be filled out in triplicate and can be vetoed by their landlord, suggests that nobody putting together these programs has ever had to use one of them.