books Evil Geniuses: The Unmaking of America – a Recent History

"There have been many books on neoliberalism and financialization," writes reviewer Sharpe, but few others "have traced the history down to the level of individual documents and memos." 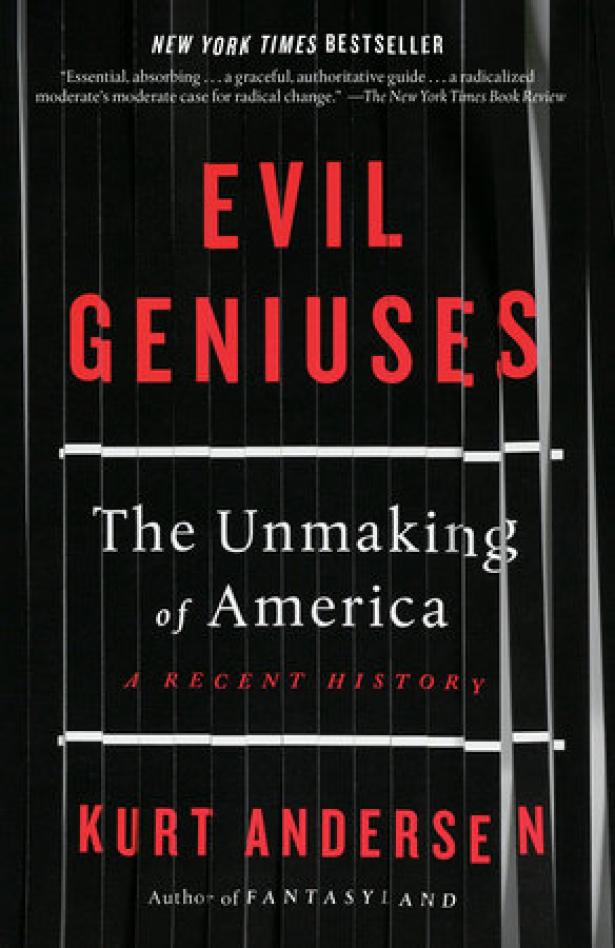 Journalist and author Kurt Anderson tells us that around 2006, just before the global financial crisis, he had an epiphany.  The USA was no longer the country in which he grew up (xv).  Since the 1980s, America had become culturally (even musically) stagnant, riven by endless culture warring, and mired in a nostalgia which Trumpism would soon enough prey upon (“…. great again”) (xvii, 267-8).  Meanwhile, wave after wave of economic reforms had destroyed the middle classes and the aspirational American dream for the vast majority of Americans, as “the piece of the income pie taken each year by the rich had become as hugely disproportionate as it was in the 1920s … an average CEO now gets paid several hundred time the salary of the average worker, a gap that’s of an order of magnitude larger than it was in the 1970s” (xvi).  The America of the future, Anderson came to fear, “isn’t so much a too-Hispanic US society caused by unchecked Mexican immigration but a Latin-Americanized society with a … callous oligarchy gated off from a growing mass of screwed-over peons” (xvi).

Evil Geniuses is Anderson’s attempt to understand how this new US could have come into being, in which cultural nostalgia buffers and feeds off the ceaseless economic destabilisation and redistribution of wealth, opportunity, and privilege upwards, and the future seems bleaker and bleaker for more and more ordinary people.  Anderson’s contention, which he tells us he struggled to avoid, is that this new America was not the result of blind structural forces, or the inevitable workings of some infernal, unchallengeable historical machine.  It was the result of a concerted effort, “more like arson than a purely accidental fire” (xx) of forces within business to replace the American New Deal with what Anderson calls the new “Raw Deal”.  This effort began in the 1970s (Part Two, “Turning Point”), gathered momentum in the Reaganite 1980s (Part Three, “Wrong Turn”), and had consolidated itself by the turn of the new millennium (Part Four, “Same Old Same Old”).   By 2002, Warren Buffet (whose personal income had multiplied a meagre 130 times since 1982) was open about calling this phenomenon for what Anderson argues that it has been: “there’s class war, alright.  It’s my class, the rich class, that’s making war, and we’re winning. (quoted 290).

It is the scale and weight of the historical and statistical evidence which Anderson has assembled in Evil Geniuses which most recommends this book for anyone interested in America’s decline, and the likely future it announces for societies whose ruling groups take the US as a model.  There have been many books on neoliberalism and financialization, but few which have traced the history down to the level of individual documents and memos.  Few also have assembled so much evidence, as Anderson’s Evil Geniuses does, of how coordinated the capitalist Right’s efforts have been since the first “rebellious” murmurings and memos of the early 1970s, spanning economics and finance into antitrust law, higher education, politics, media, the climate debates and culture wars.

For readers who are time-poor, indeed, Anderson condenses his research into two inventories: the first concerning the suite of changes good for big business, finance, the rich, and bad for other Americans (“The Decade When Everything Changed and Our Present Was Created: 57 Data Points”, 118-122), and summarising the changes favouring the rich and big capital, and detailing the ways “the rich are different” from “survivors and losers” between 1980 and 2018 (“Nobody but the Rich (and Nearly Rich) Got Richer: 27 Ways the Pie is Cut Differently Now”, 292-5).  Some of these data points are so astonishing that they are worth listing here:

The picture these data points paint will itself be familiar to many readers, although the shock and awe of their condensed, systematic presentation in Evil Geniuses should not be undervalued.  Anderson summarises things fairly succinctly in an early passage on all of the things Reagan’s “Morning in America” didn’t directly “announce”, but set in motion from the top-down, and which have since come to pass:

that if Americans elected him, private profit and market values would override all other American values; that as the economy grew nobody but the well-to-do would share in the additional bounty; that many millions of middle-class jobs would vanish, along with fixed private pensions and reliable healthcare; that a college degree would simultaneously become unaffordable and almost essential to earning a good income; that meaningful enforcement of antimonopoly laws would end; that meaningful control of political contributions by big business and the rich would increase by 1000%; that our revived and practically religious deference to business would enable a bizarre American denial of climate science and absolute refusal to treat the climate crisis as a crisis; that after doubling the share of the nation’s income that it took for itself, a deregulated Wall Street would nearly bring down the financial system, ravage the economy, and pay no price for its recklessness, and that the federal government he’d committed to discrediting and undermining would thus be especially ill-equipped to deal with a pandemic and its consequences (xxii).

What was newer to this reviewer, and will perhaps be so to many readers, is the historical story Anderson tells of this extraordinary project in reactionary hegemony, spanning half a century, and not yet at its terminus.

The story begins in the 1960s, with the anti-government sentiment of the new, youthful middle class Left.  The “do you own thing” of the 60s’ hippies, Anderson notes, shared uncanny libertarian credentials with the “every man for himself” of the neoliberal New Right.  The doyen of the latter economic school, Milton Friedmann (55, 79-80) would indeed announce what people agreed to call his “doctrine”: that “the social responsibility of business is to increase its profits” – to Times Magazine shortly after Woodstock, in the f**-you anti-establishment “spirit of the ‘60s” (55).

This “cri de coeur for cold-heartedness” and “shameless greed” (54, 80), however, was joined in the same portentous year of 1970 by the first presentation of what, one year later, would become any even more influential, lesser-known text: “Attack on American Free Enterprise System”, or “the Powell Memo” (56-60).  In it, establishment lawyer, Lewis Powell, denounces the “bewildering paradox” that the American system should tolerate dissenting voices in its universities, on its television screens and radio channels, as well as in bloated leftist bureaucracies, who “propagandise against the system, seeking insidiously and constantly to change it” (57-58).  This paradox for Powell was nothing less than an existential threat to American capitalism.  It necessitated that American businessmen steel themselves “to conduct guerrilla warfare” requiring “long-range planning and implementation … over an indefinite period of years, in the scale of financing available only through joint effort, and in the political power available only through united action and national organizations … This is a long road and not for the faint-hearted” (58).  Indeed, there was to be no more tolerant soft-pedalling of counter-business sentiment: capital now need to undertake “confrontation politics” (59).

This should be a war fought on no less than four fronts: in the academy, at law, through politics, and by media.  Capital would need to find and fund academics and intellectuals who could effect “a gradual change in public opinion”.  Political power should be shamelessly courted and “used aggressively” and “without embarrassment”.  A newly-awakened Right needed to copy the strategy of their enemies, “the labour unions, civil rights groups, and the public interest law firms” to create “judicial activism in reverse”, in order to slowly claw back the gains so far won by these enemies (58).

Anderson does not maintain that the Powell Memo, by itself, galvanised the pro-business Right and necessitate its subsequent long struggle to dominance.  But it did lay out a ground-plan for much of the “forty-year winning streak” for big business that followed (98).  Powell’s open declaration of war in the name of “free enterprise” contributed to creating what Anderson calls “class consciousness” amongst the super-rich, and “electrifying a new breed of ultraconservatives to weaponize their philanthropic giving” as a means to conquer and consolidate their full-spectrum economic, cultural, legal and political ascendancy (59-60, 99-100).

Much of the subsequent narrative of Evil Geniuses gives a year-by-year, almost blow-by-blow, account of the new Right’s multi-front militancy, including introductions to many of its key actors, and institutions with benevolent-sounding names like the “Business Roundtable”, “Cato Institute”, “Heritage Foundation”, “Federalist Society”, “Law and Economics”, and more.   Its successes were in no small measure due to its incrementalism, as well as to the esoteric economistic language in which many of the regulatory, taxation, and financial reforms were cast: “it didn’t feel quite like a paradigm shift because it was mainly carried out by means of a thousand wonky adjustments to government rules and laws, and obscure financial inventions, and big companies one by one changing how they operated and getting away with it – all of it with impacts which emerged gradually, over decades” (xxi).

It is the scope of these changes that is at once impressive and depressing, for a progressive reader: from stacking faculty in law schools to push back against progressive law-making, to creating quasi-academic think tanks or funding new academic departments to spread the “right” ideas, to changing financial regulations to allow ever-more arcane derivatives, to enabling predatory “LBOs” (leverage-funded buyouts) jacked by “junk bonds”, to paying managers with stocks to make sure they prioritised stock prices over other values (like, for instance, a happy or secure workforce), to ongoing union-busting, casualisation and “contractising” of the labour force, to endless culture warring, to removing responsibilities on TV networks to broadcast a variety of perspectives in their news contents, to a concerted campaign to scuttle anti-trust laws ostensibly there to prevent the monopolistic destruction of free markets (thereby enabling the continuing concentration of wealth), to demonisation of those on welfare, to concerted campaigns to cast doubt on climate science and create false equivalence between “deniers” and over 99% of the scientific community …

Evil Geniuses – by naming names, dating dates, citing the documents, and piecing all of this together in prose of such lucidity and cogency to make the book surprisingly gripping – has done readers a great service, however confrontational Anderson’s wall of facts surely is.  Part Five of his book calls for a rewriting of the American social contract, imperilled now also not only by climate change but the growing spectre of automatization, as well as the collapse of democracy into post-Trumpian neofascism.  Anderson argues that the era of anti-governmentalism, promoted and not “found” by the Right, must now be ended; and that nothing short of major institutional and economic reforms will be needed to “reset the balance of power in a big way in favour of the majority” (352).

Continuing failure to do this, despite the concerted opposition it faces, will lead the US into what neoliberal economist Charles Murray described as early as the 1990s as “the Latin American model”, warning: “the Left have been complaining that the rich have too much power.  They ain’t seen nothing yet” (240).