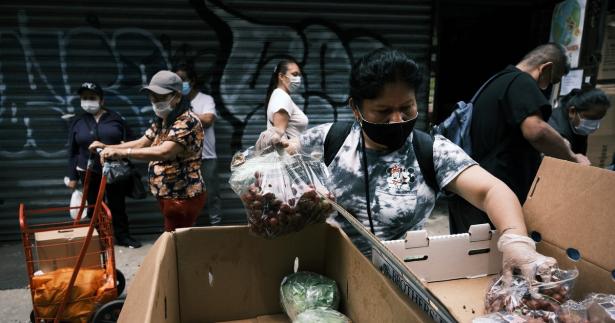 "Around 35 million people (10% of the U.S. population) live in households that are scheduled to lose unemployment income."

Despite the ongoing threat posed by the highly transmissible Delta variant, the White House and Democratic lawmakers have provided no indication that they plan to prevent several pandemic-related unemployment programs from expiring on September 6, which—in a cruel irony—happens to be Labor Day.

The consequences of government inaction in the face of what one analyst recently described as "the largest cutoff of unemployment benefits in history" could be massive, both for those directly impacted by the cuts and the still-ailing U.S. economy.

As Matt Bruenig of the People's Policy Project noted Thursday, the Labor Department's latest weekly unemployment insurance (UI) report shows that "9.2 million people are currently receiving benefits from either the Pandemic Emergency Unemployment Compensation (PEUC) program or the Pandemic Unemployment Assistance (PUA) program," which were implemented last year to extend the duration of jobless aid and provide assistance to those who are typically ineligible for UI, such as gig workers.

"According to the Census Household Pulse Survey, the average household that is receiving UI benefits has 3.8 members in it," Bruenig observed. "This means that around 35 million people (10% of the U.S. population) live in households that are scheduled to lose unemployment income."

"These are not small cuts either," he continued. "Based on what happened in the states that already cut these benefits, we know that around half of those on UI will see their benefits drop to $0 while the remaining half will see their benefits cut by $300 per week, which is equivalent to $15,200 per year. Those formerly on UI will also cut their spending by about $145 per week ($7,540 annually), which will have negative effects on the revenue and employment of the businesses they patronize."

But even amid such dire warnings, the possibility of a UI extension has been virtually absent from discussions on Capitol Hill as Democratic lawmakers work to assemble a $3.5 trillion spending package aimed at achieving a range of longstanding policy goals, from major climate investments to Medicare expansion.

“The Biden administration has not made it a priority, and outside of Ron Wyden, you haven't heard too many people in the Senate be willing to push on that," Andrew Stettner, a senior fellow at the Century Foundation, told Vox, referring to the Democratic senator from Oregon, a key architect of the soon-to-expire UI programs.

"The unwillingness to extend emergency benefits—or even debate it—shows how inured we've become to plight of the unemployed."
—Andrew Stettner, Century Foundation

"It doesn't seem like right now there would even be 50 votes in the Senate" for an extension, Stettner observed.

Last week, Labor Secretary Marty Walsh and Treasury Secretary Janet Yellen said that President Joe Biden believes it is "appropriate" for the $300-per-week federal UI boost to expire as scheduled. Twenty-six states—each led by a Republican governor except Louisiana—have already ended the emergency UI aid, and the Biden administration did not try to stop them.

Subsequent research has vindicated economists who warned that—contrary to the claims and predictions of Republican leaders—ending the benefits prematurely would do little to boost hiring. A Wall Street Journal analysis released Wednesday found that "states that ended enhanced federal unemployment benefits early have so far seen about the same job growth as states that continued offering the pandemic-related extra aid."

While Republicans have insisted that the emergency UI programs are dissuading people from returning to the workforce, analysts have pointed to the myriad other factors at play, including lack of child care and pandemic-related health concerns.

Dr. Rakeen Mabud, the chief economist at the Groundwork Collaborative, warned in a statement earlier this week that "amid increasing uncertainty in the trajectory of the pandemic, Monday's unemployment cliff could not come at a worse time."

"Millions will suffer as they lose this critical source of income and the loss of spending will suppress job growth, setting us back yet again in our efforts for an inclusive and equitable recovery," Mabud said.

Painful enough in itself, the benefit cut-off will come just days after the U.S. Supreme Court struck down the Biden administration's nationwide eviction moratorium, putting millions of people at imminent risk of losing their homes amid a deadly pandemic. The U.S. is currently averaging around 164,000 new coronavirus infections and 1,500 deaths per day.

"It's going to be a perfect storm for a lot of folks," Jordan Dewbre, a staff attorney for the New York-based community organization BronxWorks, said of the confluence of UI expirations and the end of the eviction moratorium. "We are still in the middle of a pandemic."

In a series of tweets on Thursday, Stettner of the Century Foundation warned that "this cliff dwarfs anything we have seen before." If the federal programs expire, jobless workers will be left with often-paltry state-level UI benefits or—if they've exhausted their eligibility for such assistance—nothing at all.

"The unwillingness to extend emergency benefits—or even debate it—shows how inured we've become to plight of the unemployed," Stettner wrote. "With eviction protections ending at the same time, long-term unemployed workers are now vulnerable to lasting economic damage. Black and Latino workers have the least in savings built up to navigate this transitional period."

"Congress should have the courage to reinstate benefits, especially in high unemployment states, if the Delta surge slows the recovery," Stettner added, "and make permanent changes to UI benefits so that we won't have to rely on emergency programs during the next economic crisis."