The Battle of Blair Mountain saw thousands of miners battling cops’ machine guns—and enduring aerial bombardment. Yet today hardly anyone remembers a thing about it. 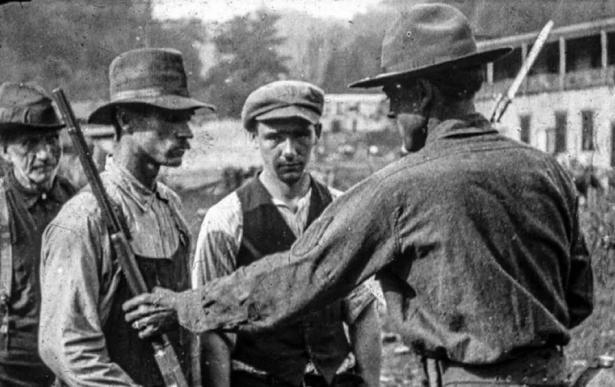 Striking miners surrender their rifles to federal troops after the Battle of Blair Mountain in August of 1921., Wikimedia Commons via National Park Service

LOGAN, W.VA.—Heading east from here, County Road 17 snakes up and down craggy hills for several miles before crossing an unremarkable intersection. A deserted church sits on one corner. On the other, a small bronze plaque recounts the Battle of Blair Mountain, a labor dispute that saw almost 10,000 miners face off against a union-busting sheriff, several thousand deputized locals, and the US military. It was the largest armed uprising in the country since the Civil War. This year marks the 100th anniversary, yet hardly a soul today remembers it.

The origins of the battle can be traced to the Matewan Massacre, when gun thugs working for Baldwin-Felts—an infamous strike-breaking “detective” agency—got into a shootout with a group of miners and Sheriff Sid Hatfield. After Baldwin-Felts agents murdered Hatfield in revenge the following year—on the steps of the county courthouse—his death became a martyrdom that roused miners to battle.

Coal life was already hard enough. Dangerous conditions (the Monongah Disaster alone killed upwards of 400 people, not to mention the long-term effects of breathing in coal dust), low wages (mine owners had been convicted of war profiteering during World War I), and exploitative credit systems were par for the course.

The situation only escalated in the summer of 1921 after hundreds of striking workers were arrested and held indefinitely. Hatfield’s death was the final straw. By August, thousands of miners were marching toward Matewan, intent on freeing their comrades and bringing their guerilla version of class warfare into action.

Today, downtown Matewan—population 499—stretches two blocks and features a barbecue joint, a halfway house, and two souvenir shops. On a recent Saturday morning, tucked inside a concrete building at the end of the street, 30 retired miners from Local 1440 of the United Mine Workers of America (UMWA) were holding their monthly meeting. The engine snarls of ATVs—visitors to Hatfield-McCoy Trails, southern West Virginia’s main tourist attraction—had yet to fill the air. Two pots of coffee brewed in the kitchen; still-warm egg-and-cheese sandwiches were laid out on a side table. A single gavel called the meeting to attention, followed by a prayer for the miners on strike in Alabama. The hall is a place for these men to banter with old friends and vote on union issues. It is the closest thing to a community center Matewan has, one of the few signs of life in an area on a long decline.

West Virginia has the sixth-highest state poverty rate in the country—and the highest for men. The mining industry, almost 94 percent male, has fallen from a peak of 177,000 jobs nationwide in 1985 to around 42,000 today.

“There’s the hospital outside Logan and Walmart for work,” said Terry Steele, one of the local’s more vocal members. Steele and a few others could recall running coal in the past 20 years. A handful said they had a child who had mined at one point, proof enough that union jobs have disappeared, and with it the opportunity for social mobility that the UMWA had offered for over 100 years.

State leaders in Charleston strike a different tune, praising coal while simultaneously gutting coal communities. Coal operators, for their part, continue to operate wherever they can squeeze the last bits of coal out of the ground, leaving communities to deal with the ecological fallout.

It is the miners who remain. With mainly small-donor contributions, Local 1440 funded the completion of the West Virginia Mine Wars Museum next door, preserving a story of capitalism, oppression, and solidarity that was erased from public record.

When the bombs started falling on the slopes of Blair Mountain—on Labor Day, 1921–many realized the gravity of their situation. For almost a week, miners numbering in the thousands had been battling machine-gun nests commanded by Don Chafin, sheriff of Logan County. They had already refused the pleas of President Harding, who feared their struggle might inspire the nearly 2 million unemployed Americans across the country to launch a full-scale class revolution. Thousands of leaflets bearing Harding’s message calling on the miners to disperse, were dropped by plane—and summarily ignored.

By nightfall, after the rumble of machine-gun fire and whir of biplane engines had dissipated, the miners must have looked around from where they were perched in trees or stretched out in hastily dug trenches and seen the numbers missing from their ranks. Still, they fought on.

Their fight was the culmination of a decades-long struggle. After coal companies rejected every effort by the UMWA to win representation, armed struggle took hold. By the end of the week somewhere between 50 and 100 miners, among them Appalachians, Italian immigrants, and African Americans, were dead.

UMWA membership declined for years in the wake of the battle, but after the passage of the National Labor Relations Act in 1935, union President John L. Lewis led the UMWA back to southern West Virginia as soldiers returning to Rome, unionizing every coal operation they encountered. The fight to unionize the West Virginia coalfields was over—or so it seemed.

In the final room of the Mine Wars Museum, Kimberly McCoy, the museum’s resident guide, and a great-niece of Sid Hatfield, opened up five different West Virginia history textbooks from the 1930s to the 1980s to the section where “the Battle of Blair Mountain should have been,” Kim said, “but they’re all empty.” In 1920, Governor Ephraim Morgan set up an American Constitutional Association to select the textbooks used in West Virginia schools, which excluded any mention of the state’s mine wars. Generations grew up cut off from their ancestors’ struggles because business leaders were afraid history would repeat itself.

And it did. The members of Local 1440 in Matewan demonstrated the same militant struggle of years past during the Massey Energy Strike. Miners picketed for 15 months outside facilities lined with barbed-wire fencing and patrolled by uniformed guards. Massey Energy hired helicopters to patrol the surrounding hollers. A non-union driver was shot to death. Massey CEO Don Blankenship, perhaps the most infamous name in the Tug River Valley, likened the UMWA to Soviet Russia, while the UMWA later launched the successful 1989 Pittston Strike. The West Virginia mine wars have been replayed again and again.

Sitting inside the only bar in Williamson, the seat of Mingo County, it’s easy to mistake the mostly white customers, their pants caked in mud, helmets in tow, for local residents. There are few residents left in an area where tourists come to spin ATVs around hills still littered with the weapons hidden by retreating miners a century ago. The men at Local 1440 are the last of them, bolters and buggy runners, white and black, all of them union members. They represent the dam holding back the change in West Virginia’s demographics.

In an act of prestidigitation, the once-minority Republican Party in West Virginia shifted blame for the decline in coal production away from coal companies and onto the federal government, whose embrace of green-energy standards was blamed for the area’s decline. Democratic Senator Joe Manchin remains a lonely outlier in a state that Bill Clinton carried by 13 points. The flags adorning the sides of homes going north up Route 52 are half Confederate, half American, echoing the fiercely individualistic yet dissonant nature of politics and identity here. The state’s independent streak, once associated with rowdy miners disobeying federal orders, has been channeled instead by angry insurrectionists storming the nation’s capital.

Jobs and people keep leaving West Virginia, and those who can’t escape are trapped between a rock and a hard place. Mingo County was the capital of the pill-mill industry, where more narcotic pills were sent per head of population than anywhere else in the country. Ask the miners in Local 1440 who suffers from breathing-related issues and every hand shoots up. “Doctors will tell you you’re not fully disabled by black lung and deny your claim,” said Danny Whitt, the union’s secretary.

No one living in these hills believes the days will ever return when these valleys bustled with the sound of departing coal trains. On the 100th anniversary of the Battle of Blair Mountain, this mining community, left to fend for itself, is instead a tale of what happens after businesses finds no more use in their workers.

There is a direct line between the decline in well-paying union jobs, subsequent losses in tax revenue, the deterioration of community services and tearing of the social fabric, and the regression of a once highly collective class of people into a more individualist and self-reliant population weary of notions such as solidarity. The story of southern West Virginia is exactly this tale, written in the lives of its people, commemorated only by a single bronze marker on the corner of an unmarked intersection.

Samuel Fleischman is a labor writer, researcher and member of the Emergency Workplace Organizing Committee. His work has also appeared in Jacobin.

Please support  progressive journalism. Your subscription supports The Nation's award-winning reporting. Subscribe now for as little as $2 a month!