Between 2012 and 2020, the white-Black turnout gap grew between 9.2 and 20.9 percentage points across five of the six states originally covered by Section 5 of the Voting Rights Act. 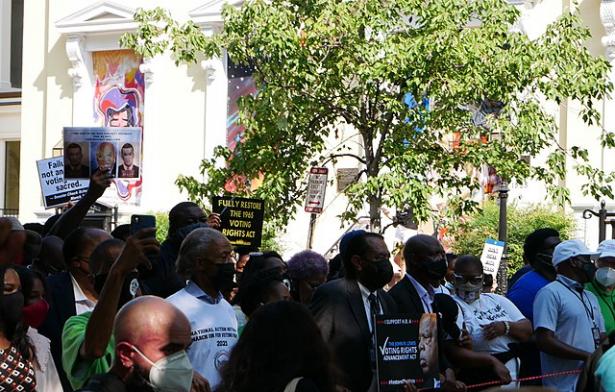 In 2013, when Chief Justice John Roberts delivered the Supreme Court’s majority opinion in Shelby County v. Holder, he argued that the Voting Rights Act of 1965’s preclearance requirement under Section 5 was no longer needed because “African-American voter turnout has come to exceed white voter turnout in five of the six States [Alabama, Georgia, Louisiana, Mississippi, and South Carolina] originally covered by §5 with a gap in the sixth State of less than one half of one percent [Virginia].” Although this was true in 2012 — and only 2012 — the white-Black turnout gap in these states reopened in subsequent years, and by 2020, white turnout exceeded Black turnout in five of the six states. 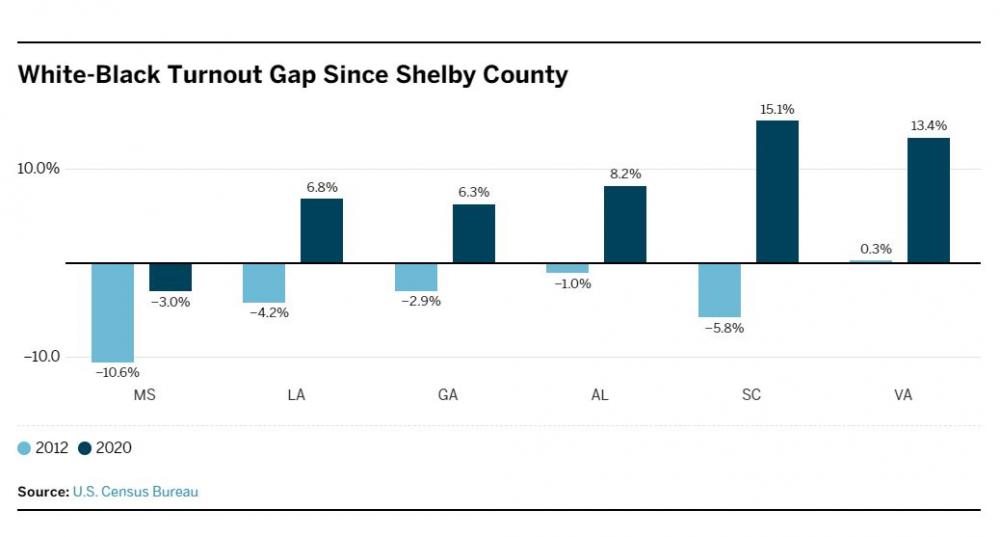 Using the same source of census data that was used in the Shelby County opinion, we show that the racial turnout gap has increased in most jurisdictions that were previously covered by preclearance. Racial turnout rates are calculated by dividing the number of ballots cast by the estimated citizen population above the age of 18. This analysis was compiled from the past 24 years of general-election voter data from eight states. The states used are based on the eight states the Voting Rights Advancement Act (VRAA), as introduced in 2019, will likely cover, according to recent congressional testimony by George Washington University law professor Peyton McCrary. Those states are Alabama, Florida, Georgia, Louisiana, Mississippi, North Carolina, South Carolina, and Texas — all of which were covered in whole or in part by the preclearance provisions of the Voting Rights Act before Shelby County.

We also believe the white-nonwhite gap may be underestimated, as the census data we use for analysis fails to provide information on Native American voter turnout, a group that is significantly impacted by discriminatory voting laws. However, we do know from the National Congress of American Indians that registered voters in this group have a lower turnout rate than other racial groups, which provides the basis for our assumption.

While in 2012, just before the Shelby County decision, the white-Black turnout gap was shrinking in the states we analyzed, and in many instances even briefly closed, this trend has reversed in the years since. In 2012, seven out of the eight states had Black voter turnout higher than that of white voters. In 2020, the reverse is true — in only one of the eight states was Black turnout higher than white turnout. 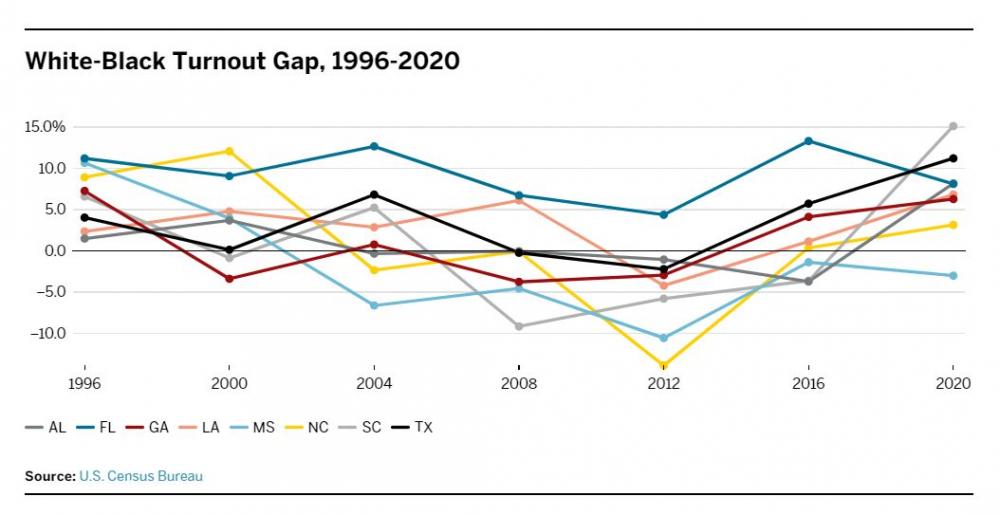 A similar trend can be seen in the gap between white voters and all nonwhite voters. The total white-nonwhite turnout gap has grown since 2012 in all of the eight states likely to be covered under the VRAA. There is sufficient data to conclude that the gap has increased for Blacks, Hispanics, and Asians in Florida, Georgia, North Carolina, South Carolina, and Texas. In Alabama, Louisiana, and Mississippi, the sample sizes in the available 2020 census data are too small for Hispanic and Asian voters to make much of a difference in an overall white-nonwhite turnout gap estimation that is distinct from the white-Black turnout gap in those states. Notably, North Carolina went from having a larger share of nonwhite voters represented in 2012 with a white-nonwhite gap of -9.3 percentage points to having a gap of 5.4 percentage points, a jump of 14.7 percentage points, far greater than the national average of 4.6 percentage points. 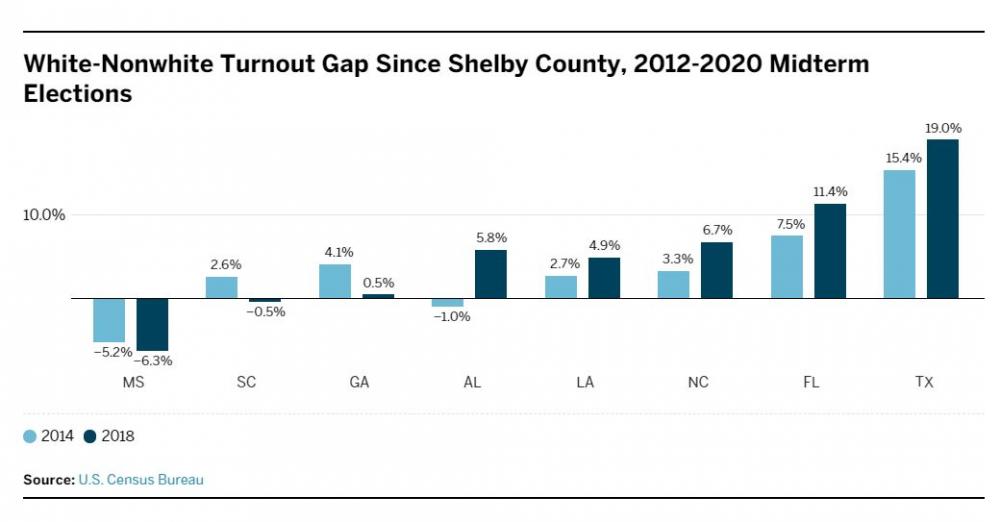 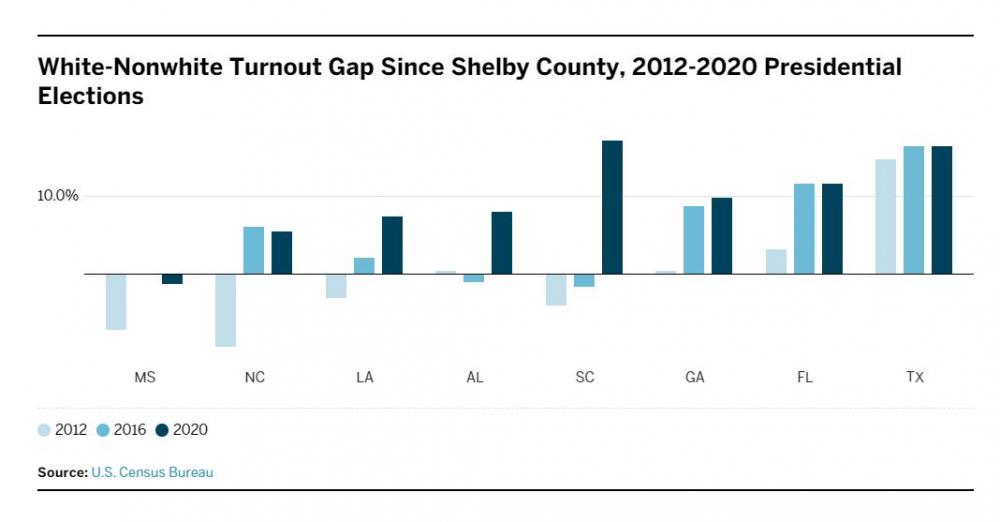 Expanding the analysis to other nonwhite groups also reveals that, even in 2012, progress on closing racial turnout gaps was not as significant as the Shelby County decision suggested. The Court only examined the white-Black turnout gap, which did temporarily close in many states in 2012, likely due to Barack Obama being on the ballot and Black voter turnout subsequently surging. But with the exception of Latino voter turnout briefly surpassing white turnout in Florida in 2012 and Louisiana in 2012 and 2016, Latino voter turnout has lagged behind white voter turnout for the last 24 years in every state where those rates are measurable. 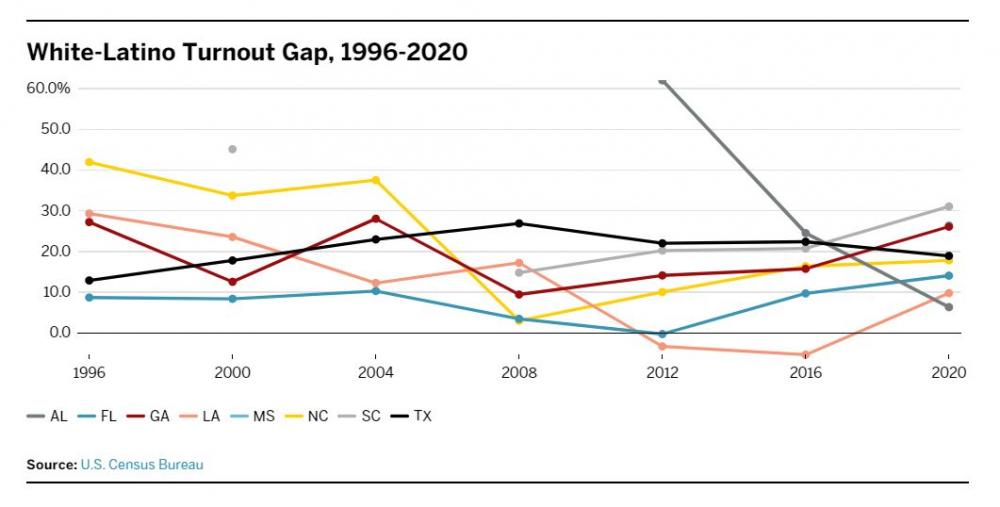 Peter Miller is a researcher at the Brennan Center focusing on redistricting, voting, and elections. His research interests include U.S. and comparative politics, voting behavior, political institutions, and public opinion. His work has been published in several peer-reviewed journals, including the Annual Review of Political Science, Electoral Studies, Election Law Journal, American Politics Research, and the Journal of Elections, Public Opinion, and Parties. One of Miller’s articles on redistricting commissions was cited by the U.S. Supreme Court in Arizona State Legislature v. Arizona Independent Redistricting Commission. He is a frequent commentator on topics related to redistricting reform, voting rights, and elections.

Coryn Grange is Parke Fellow at The Brennan Center.  She is a NYU Wagner Graduate School and CUNY Hunter College alumnus.

Defend Our Democracy.  The Brennan Center for Justice fights to make elections fair, end mass incarceration, and preserve our liberties — in Congress, the states, the courts, and the court of public opinion. Join us in building an America that is democratic, just, and free.