Re: Occupy Wall Street at 10: What It Taught Us, and Why It Mattered (Jose Luis Medina)
Re: The War on Terror Was Corrupt From the Start (Paul Buhle)
The U.S._Border_Patrol  --  cartoon by Lalo Alcaraz
I'm a Teacher in America  --  Time Magazine cover
Re: Striking Cookie Workers Refuse to Crumble (Jason Oringer; Roger Ellis; Florence Punch)
Re: The Future of Labor Is Growing in South Dakota (Jim Williams)
Re: This Powerful Democrat Linked to Fossil Fuels Will Craft the U.S. Climate Plan (Ken Roseman; Judith Halprin; Marlene D McArthur; John Thompson)
Texas: Who Has Rights.....
Re: Don’t Judge a District by Its Shape (Tom Spellman)
Dr. Christian Taliban  --  cartoon
Re: German Elections: Who With Whom Elections (Stan Nadel)
Re: Lessons From 50 Years Covering Foreign Policy (Judy Atkins; Joseph G. Kaye)
Re: Expanding the Military Draft Is Not Feminism. Abolishing Draft Registration Is. (Jeanne Lenzer)
Re: Global Left Midweek - Indigenous World (Kipp Dawson)

Poster of the Week — Who's the illegal alien Pilgrim? (Center for the Study of Political Graphics)

Re: Occupy Wall Street at 10: What It Taught Us, and Why It Mattered

It basically started the wave of activism that revived the left—and taught people to get serious about power.

Re: The War on Terror Was Corrupt From the Start

a rare admission from the NYT

The U.S._Border_Patrol  --  cartoon by Lalo Alcaraz 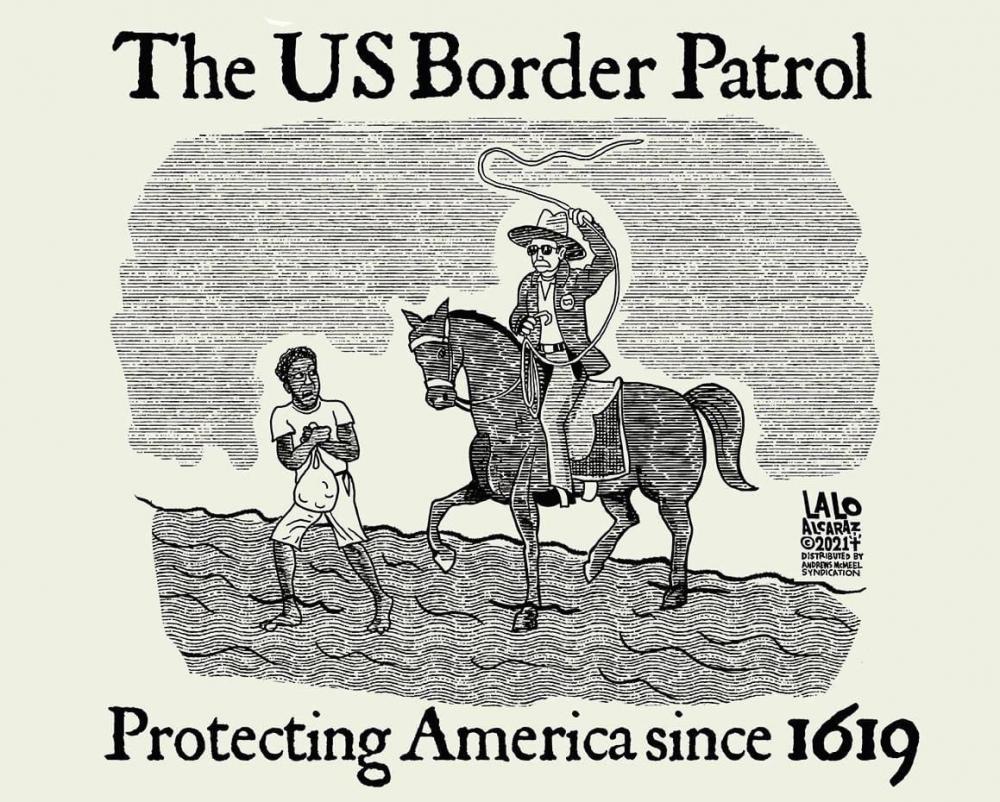 The US Border Patrol's slogan is "Honor First," but I think I have a more accurate one. Please share #laloalcaraz cartoons 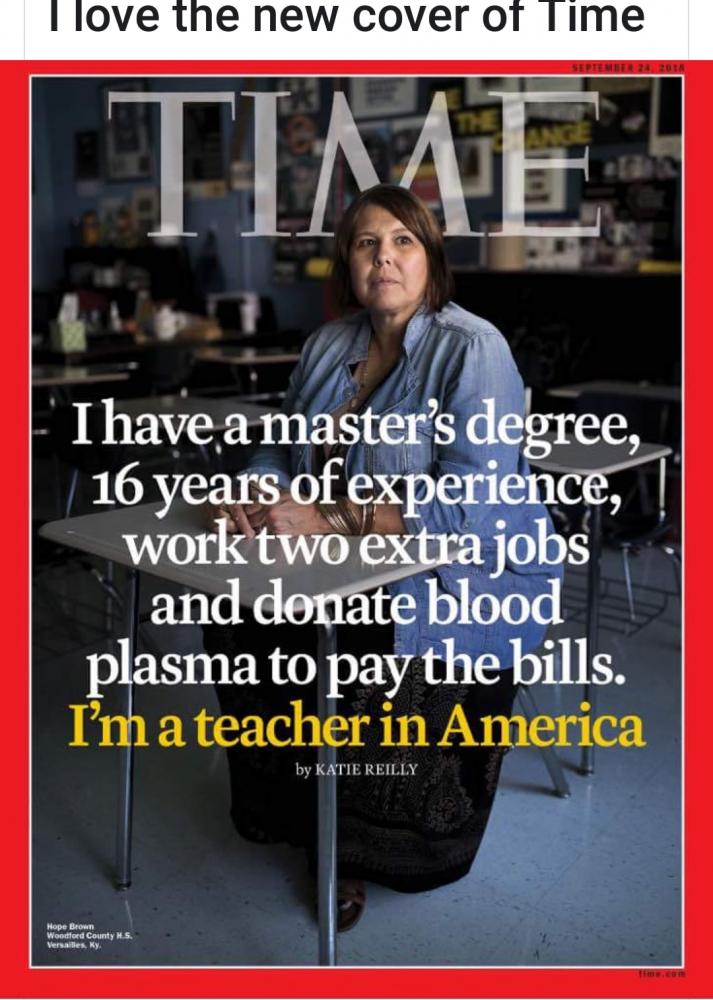 Now is the time for workers to unite! Every employer in every industry is trying to hire right now! Labor holds all the keys to the kingdom, if they will only unite!

The $ disparity is obscene; the callousness of the remote work from home management towards the in-person employees????

Re: The Future of Labor Is Growing in South Dakota

It looks like we have somebody to keep an eye on.  Between S Dakota and Vermont, is there something bubbling in state labor federations?

Re: This Powerful Democrat Linked to Fossil Fuels Will Craft the U.S. Climate Plan

This guy has way too much power and leverage. He is very connected to the extractive industries. How can his power be erased or at least neutralized?

he is only powerful because they are too weak to dump or circumvent the filibuster, which McConnell does with as much effort as ordering his lunch. He stopped a Supreme Court nomination and then shoved 3 of them through, trampling on every rule, norm and order. He understood and used the power of his majority position. DEMS - JUST DO IT!

He's not a dem. Nor is he a moderate.

He's one of the main reasons why the Democratic Party in West Virginia went from the majority party holding all the statewide elected offices and majorities in the WV legislature to the minority party with only one statewide elected office - his - and the Republicans holding super majorities in the WV legislature. He's a plague on the Democratic Party. 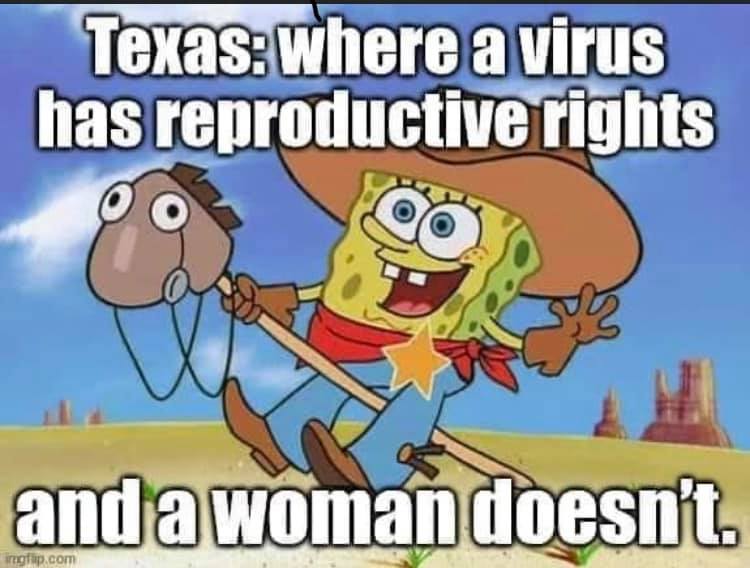 Re: Don’t Judge a District by Its Shape 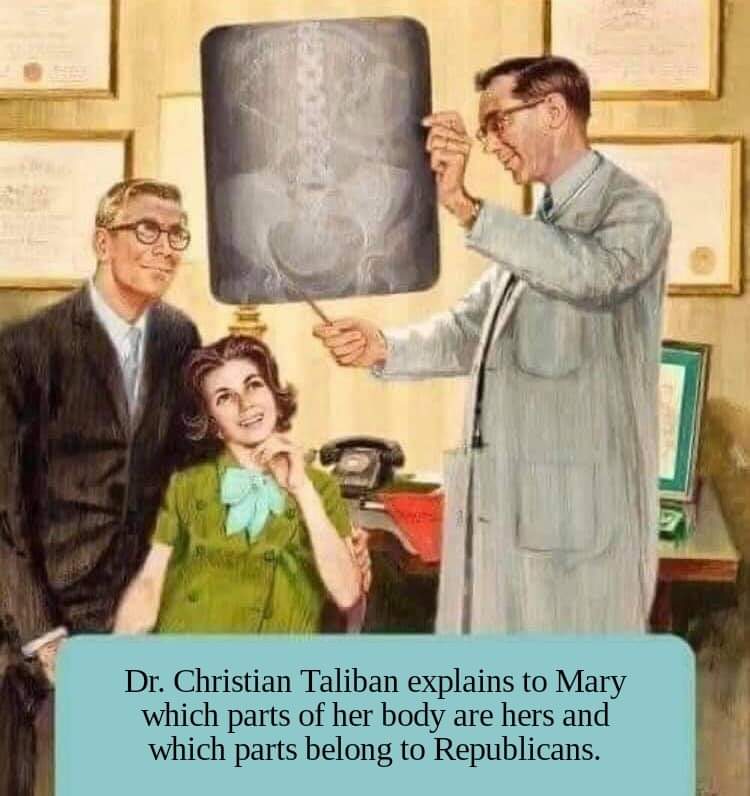 Re: German Elections: Who With Whom Elections

Norway going left is nice, but much more important is the question "why has the German Linke Party been in steady decline despite economic conditions that should be to their advantage"? The Linke vote has declined by half and if this continues they won't even make it into the national parliament soon. And why are they loosing voters mainly to the far right AfD? These are very disturbing developments and maybe Victor Grossman or another German leftist could enlighten us.

Grossman is excellent as usual, especially on elucidating the current election campaign--though he understates the desperate red baiting of the CDU in recent days. But what I would like from him or someone else is a thoroughgoing analysis of why The Left Party has lost so much support in a period when its platform should be generating widespread support. I watch the German TV news and read the German newspapers and I really don't understand why The Left hasn't been able to increase its support base instead of loosing so much of it.

Thank you, Conn Hallinan, for your good sense and the great summary of lessons we all should take to heart!

Thank you for your work.  Much appreciated.  And good luck on your coming projects.  Of course, the elite will continue to pursue its interests, impervious to appeals to morality or even common sense. And you are right that the people will have the last word.  But that word has to be tackling the fundamental task -- getting rid of a system that is inherently misanthropic and ever more crisis-ridden.

Re: Expanding the Military Draft Is Not Feminism. Abolishing Draft Registration Is.

Nope. Drafting women and men is not only fair – but necessary. A voluntary military means the poor and oppressed fight our wars, while the children of wealthy and middle class get out of serving.

That’s not only wrong in itself, but it also makes opposition to war far less likely as desperate working class and poor folk see the military as a way to get training and out of joblessness (realistic or not) and the wealthy, left unthreatened, are far less likely to act. The Vietnam war was opposed vigorously as many middle and upper class men were drafted. But Iraq? Afghanistan? Barely a peep in comparison.  Hold all of us accountable or none of us.

Thank you, Portside, https://portside.org/2021-09-22/global-left-midweek-indigenous-world for these important stories.

Poster of the Week — Who's the illegal alien Pilgrim? (Center for the Study of Political Graphics

Many posters use the slogan “No Human Being is Illegal,” and by showing isolation or family separation they intend to evoke compassion. In contrast, Yolanda Lopez challenged authority. The Aztec crushes immigration papers and demands, "Who’s the illegal alien, Pilgrim?" The tone has changed, and her poster reminds viewers that the Europeans arrived without the permission of the Indigenous peoples. She appropriated the pointing finger and frontal stare from James Montgomery Flagg’s famous World War I recruiting poster "Uncle Sam Wants You," and the connection between the 1917 poster and Lopez’s is as striking in its contrast as it is ironic in its implications.

In 1990, CSPG produced “Courageous Voices: Posters on Racism, Sexism & Human Rights,” and included this poster. The exhibition opened at Rancho Santiago College Art Gallery in Santa Ana, and the Los Angeles Times called it one of the year’s ten best exhibitions in a non-profit gallery. The exhibition subsequently traveled to 14 venues throughout Southern California and across the US, including Arizona, Colorado, Idaho, New Jersey, and Pennsylvania.

In 1996, when it was exhibited in UCLA, a high school class came and spread throughout the gallery. A group of Latinx girls had gathered around this poster and I overheard them talking about how cool it was to have posters dealing with current events. Two years earlier, California voters had passed Proposition 187, which denied access to basic services such as education and healthcare to the undocumented. Although ultimately declared unconstitutional in 1998, the court battle was still taking place in 1996.

I brought their attention to the date. The drawing and first poster was made in 1978—before most of them were born. The poster on display was printed in 1981, and it was reissued in 1994 in response to Proposition 187. The fight for immigrant rights had been going on for generations, and was one of the ongoing battles for justice addressed by “Courageous Voices.”

Yolanda Lopez (1942-2021) died this month. Her art and activism were inseparable. A granddaughter of Mexican immigrants, her art intersected and augmented the Civil Rights, Chicana/o and Women’s movements. Her most controversial works subverted the traditional image of the “Virgen de Guadalupe” into pre-Columbian goddesses and modern liberated women. 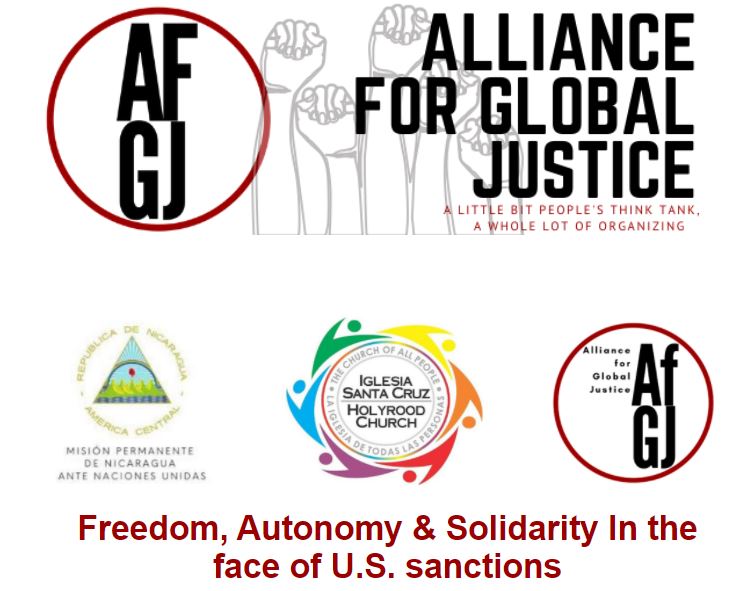 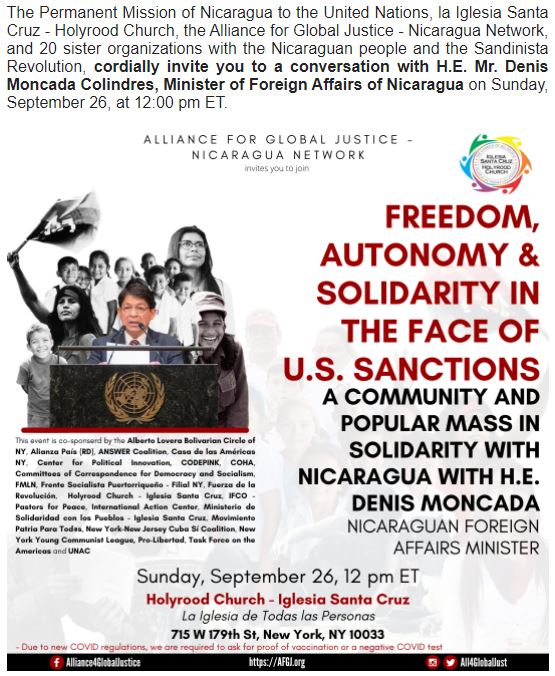 During this Community and Popular Mass in Solidarity with Nicaragua, officiated by pastor Luis Barrios, we invite you to hear from the Minister about the current situation in Nicaragua in light of the November presidential elections, the Sandinista strategy to protect the country's sovereignty in the face of sanctions imposed by the U.S. and its allies, and the importance of international solidarity at the current juncture.

This is a personalized invitation. We kindly ask you to confirm your attendance as soon as possible on the site https://bit.ly/nousimperialism

We extend our gratitude for your attention. We look forward to your presence at this key event for the efforts in defense of the Sandinista Revolution. Please receive our cordial greetings and we remain attentive to any communication from you. 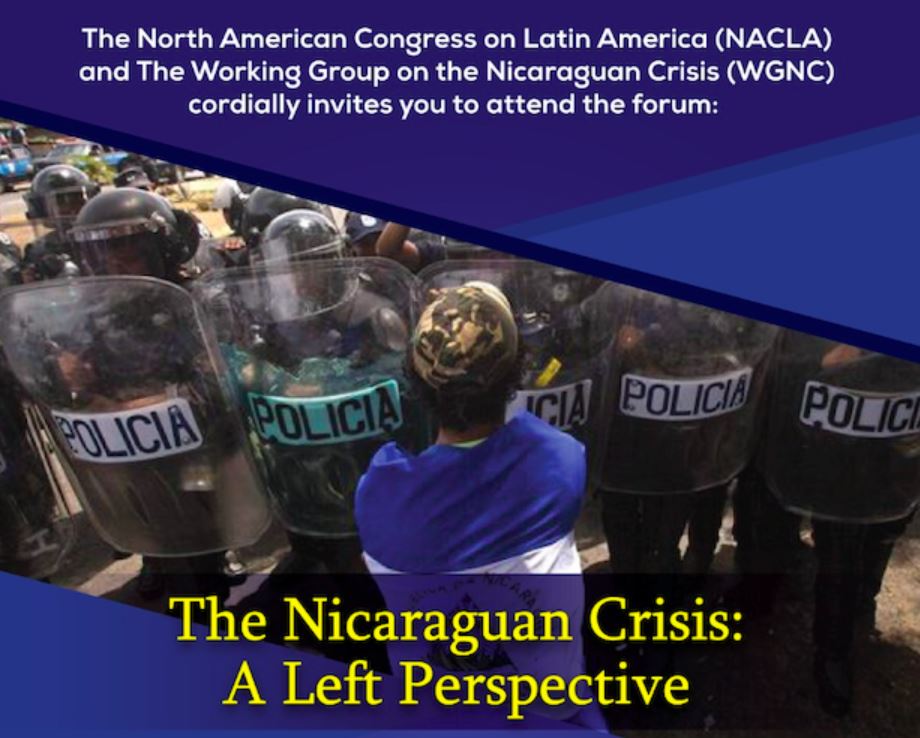 The crisis in Nicaragua has divided the Left in the United States and throughout the Americas. Significant sectors of this international Left claim that President Daniel Ortega and Vice President Rosario Murillo represents a leftist project for Nicaragua that should be defended, and that the United States is trying to overthrow the government. This event aims to address those claims from an explicitly leftist perspective.

WHERE: Register to receive a Zoom link. Free and open to the public.

FEATURED SPEAKER
Luis Carrión is a former member of the National Directorate of the Sandinista National Liberation Front (FSLN) and leader of the UNAMOS political party (formerly the Sandinista Renovation Movement).

DISCUSSANTS
Margaret Randall is a feminist poet with a long history of social activism in Mexico, Cuba, and Nicaragua, as well as the United States.
Leonor Zúñiga is a prominent Nicaraguan sociologist and documentary filmmaker.

INTRODUCTORY REMARKS
William I. Robinson is a member of the Working Group on the Nicaraguan Crisis (WGNC) and Distinguished Professor of Sociology at the University of California, Santa Barbara.

HOST AND MODERATOR
Alejandro Velasco is executive editor of the NACLA Report on the Americas and professor of history at New York University.