If Democrats allow corporate-aligned “centrists” to downsize the budget plan, abandoning FDR's legacy, they will lose not just the battle but the war. 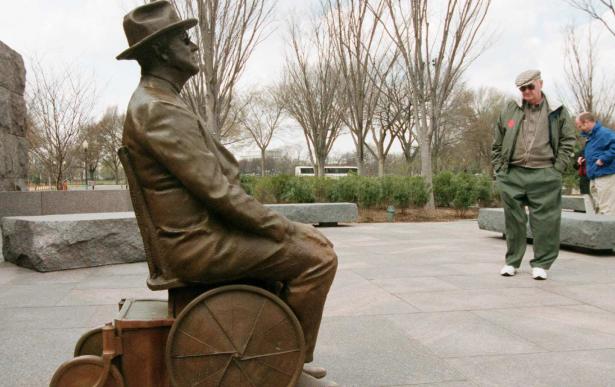 President Franklin Delano Roosevelt taught Democrats how to keep power by enacting bold programs that spoke to the pressing needs of working-class Americans. Unfortunately, the heirs to what is still referred to as “the party of FDR” have spent the better part of 75 years trying to unlearn that lesson.

This week, as Democrats toy with the politics of compromise and concession in a high-profile fight over spending priorities, they are once again breaking faith with what was best about FDR’s approach. At the same time, they are setting themselves up for another in a long string of devastating midterm election defeats.

Media coverage of the wrangling over the $3.5 trillion budget reconciliation proposal imagines a struggle between the tight-fisted “centrists” and free-spending progressives who make up the Democratic caucuses in the House and Senate. But what’s being overlooked about the corporate-aligned “centrists” who seek to downsize, or perhaps even abandon, the budget plan is that they’re preventing their party from enacting enormously popular proposals.

Crafted by Senate Budget Committee chair Bernie Sanders in cooperation with the administration and Senate leadership, the plan would expand Medicare and caregiving; provide paid family and medical leave; extend the $300 child tax credit, which is set to expire at the end of the year; and make community colleges tuition-free. “Poll after poll, especially among working-class people, shows overwhelming support for what we are trying to accomplish,” notes Sanders, who had proposed a far more ambitious agenda but ultimately worked with the administration to develop the $3.5 trillion plan. “Now, for whatever reason, pundits say we should compromise even more and cut back on addressing the long-neglected problems facing working families as well as climate change. Really? Please tell me where we should cut.”

The answer is that none of these popular proposals should be cut. If anything, they should be expanded with a “go big” vision that recognizes the need to address historic inequities that have only grown ever more jarring during the pandemic.

That’s what FDR would have done—for moral and political purposes.

Roosevelt never lost a presidential election. Nor did the Democratic Party of the longest-serving president in US history ever lose control of Congress. FDR’s strategy was simple. In hard times and good, in peace and war, he kept proposing bigger and bolder responses to the challenges facing working families.

When he was preparing to seek his fourth and final term, Roosevelt laid out his plan for the next leap forward, and for maintaining the Democratic Party’s winning streak: an “Economic Bill of Rights” that promised work and fair wages, health care, education, and housing as a right. The 1944 election was framed by his vision for a post–World War II reckoning with the unmet promises of America. In addition to winning reelection, FDR’s Democratic Party held the Senate and substantially increased its majority in the House.

It looked as if the party was prepared to establish the social-welfare state that Americans needed—and that comparable countries around the world were at the time forging. Then President Roosevelt died and Democrats started compromising with the very interests that FDR had battled. President Harry Truman dialed back the talk of economic rights, chased away the New Dealers, and steered the Democratic Party onto a more cautious course.

That course led into the abyss of midterm obliteration, year after year.

In 1946, for the first time since 1930, Democrats lost both the House and the Senate. Republicans’ moves to dismantle the New Deal, advanced in cooperation with Southern segregationist Democrats, began immediately. The Republican Congress quickly overrode Truman’s veto of the anti-labor Taft-Hartley Act, implementing it along with a host of schemes to abandon regulation and strengthen the hand of multinational corporations. Truman and the Democrats clawed their way back to power in 1948, only to lose five Senate seats and 28 House seats in a 1950 election that would empower a conservative coalition to block progressive policies for the final years of Truman’s term.

After the wilderness years of the 1950s, a young John Fitzgerald Kennedy won the presidency in 1960 on a platform that renewed the call for an Economic Bill of Rights. His successor, Lyndon B. Johnson, backed civil rights, voting rights, Medicare, Medicaid, and a war on poverty—but upended his presidency in Vietnam. And then the Democrats forgot altogether about the Economic Bill of Rights and the lessons Roosevelt taught on how to hold on to power.

Jimmy Carter won the presidency with solid Democratic majorities in the House and Senate in 1976. Yet he refused to govern as boldly as demanded by progressives—many of them associated with the labor-backed Democratic Agenda project. In 1978, Democrats lost three key US Senate seats and 15 House seats, in a result that weakened the president’s hand and set the stage for the 1980 election in which Carter lost to Ronald Reagan and the US Senate flipped to the Republicans.

Years of rebuilding brought Democrats back to full power in 1992. But Bill Clinton was a “New Democrat” who worked with Wall Street to implement free-trade deals, preached that “the era of big government is over,” and ultimately dismantled New Deal protections such as the Glass-Steagall Act. In 1994, Republicans picked up eight seats in the Senate and 54 seats in the House, gaining complete control of Congress for the first time since 1952. Clinton spent the next six years deferring to House Speaker Newt Gingrich and increasingly conservative Republicans. Then, in 2000, the Democrats lost the presidency.

The Democrats fought their way back during the disastrous Bush-Cheney years and by 2008 controlled the presidency and Congress. But a tepid response to a housing crisis and mass unemployment during the Great Recession gave Republicans a 2010 midterm opening to gain 63 seats in the House and take control of the chamber. By 2014, the Senate had flipped as well, and Barack Obama finished his presidency in a circumstance so diminished that he could not get a hearing for his final Supreme Court nominee. More than a decade after the 2010 debacle, veteran political analyst Jeff Greenfield wrote: “The votes that year changed the political dynamics in Washington and in states from one end of the country to the other; they led to a conservative conquest of the federal bench that will endure for a generation; and they are why the 2024 campaign will be fought with rules that will make it materially harder for the Democratic presidential candidate to prevail, no matter what the voters say.”

Which brings us to now.

A Washington Post headline this week announced, “Democrats face a defining test of their governing power in the Biden era.”

True enough. For Democrats to prevail in 2022 and 2024, they need to run as the party of meaningful change for the better in the lives of working-class Americans.

But if Democrats repeat the errors of the past eight decades—by conceding, compromising, and going small—the record suggests that they will lose not just the battle but the war. The voters that Democrats need will be disenchanted, frustrated, and angry. Few will actually vote Republican, but many will stay home. If history is an indicator, Democrats will lose control of Congress and Joe Biden will finish his presidency as a lame duck.

What a miserable prospect for “the party of FDR”—and for the country that desperately needs a new New Deal.

[John Nichols is a national affairs correspondent for The Nation and the author of the new book The Fight for the Soul of the Democratic Party: The Enduring Legacy of Henry Wallace's Anti-Fascist, Anti-Racist Politics (Verso). He’s also the author of Horsemen of the Trumpocalypse: A Field Guide to the Most Dangerous People in America, from Nation Books, and co-author, with Robert W. McChesney, of People Get Ready: The Fight Against a Jobless Economy and a Citizenless Democracy.]