Strike Support: What Is It and How You Can Help Striking Workers

Well-planned strikes are not only a union's most potent weapon, but also the public's best chance of forcing substantive policy changes to improve working conditions, living conditions, and the health of the planet.

October 14, 2021 Jacqui Germain TeenVogue
Printer friendly
Strike Support: What Is It and How You Can Help Striking Workers Published October 14, 2021 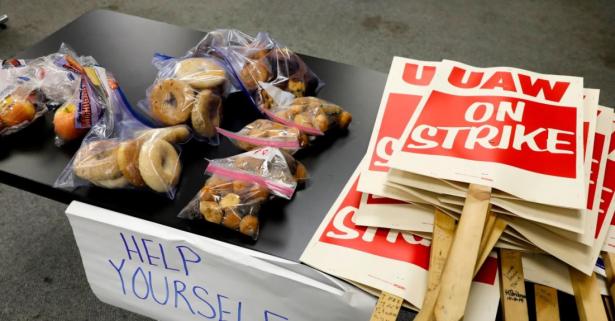 There have been nine major strikes in nine different states so far in 2021, according to the U.S. Bureau of Labor Statistics (BLS). The federal agency defines “major strikes” as work stoppages that involve at least 1,000 workers, which means that their 2021 data excludes notable strikes like the 19-day strike of hundreds of Frito-Lay workers in Topeka, Kansas in July and the now-longest-running nurses’ strike in Massachusetts history currently entering its sixth month. With such a high employee threshold, it doesn’t seem very odd that the U.S. averaged 15.4 major strikes per year between 2010 and 2019.

But starting in 1947, when the agency began collecting this data, the number of major strikes in the U.S. was in the triple digits every single year. For decades, it was entirely commonplace for there to be hundreds of organized labor strikes annually with more than 1,000 workers. That streak lasted until 1982.

To understand what changed and the role strike support plays in today’s labor movement, it’s important to look back at one key point in labor history: the 1981 PATCO strike.

That year, almost 13,000 federally employed members of the Professional Air Traffic Controllers Organization (PATCO) went on strike for higher pay and a shortened workweek. President Ronald Reagan demanded employees return to work in 48 hours. When more than 11,000 workers refused, Reagan responded with a decisive, unprecedented blow by firing them all en masse.

“The president of the United States showed all of the corporate class that you can replace all these workers when they go on strike and literally fire them,” says Jane McAlevey, organizer, author, and senior policy fellow at UC Berkeley’s Institute for Research on Labor and Employment. “So that's, I would say, the beginning of open season on workers.”

Though fallout from the PATCO strike isn’t the only reason for the drastic decline in union membership and work stoppages, the event was a demoralizing blow for organized labor, sanctioned by the highest levels of the U.S. government. By 1982, the number of major strikes dropped below 100 for the first time since the BLS began counting them more than 30 years before.

Still, McAlevey maintains that well-planned strikes are not only a union's most potent weapon, but also the public's best chance of forcing substantive policy changes to improve working conditions, living conditions, and the health of the planet. And making sure communities and other allies understand key tactics to support striking workers is a big part of that strategy.

“It's going to take workers walking off the job in very serious numbers to create the kind of crisis that forces the capitalist class, the corporate elite in this country, to the table,” argues McAlevey. “And that's not going to happen by workers isolated alone on picket lines. It's going to happen when the whole community begins to rise up and support them, broadly.”

Below are five ways you can support striking workers:

1. Support the strike, out loud and in public

Because of how much is at stake for many workers and how few legal protections most of them have, McAlevey says strikes can be really scary to participate in. When the public actively and enthusiastically validates workers during a strike, it can provide a huge morale boost.

In addition to tweets and hashtags, McAlevey adds that writing op-eds in your local paper and calling into radio stations in support of the strike can help promote a strong pro-worker narrative. Wearing a button in support of a strike whenever you head out to run errands or getting a group of local teachers or faith leaders to sign a letter of support also helps demonstrate that the community stands with striking workers.

“I'm telling you right now that every single time you honk, beep — and much more importantly, start writing letters to the editor, frame the narrative, have signs saying the community stands with you — that's going to matter, right?” says McAlevey. “Is it workers standing alone or workers with their community?”

2. Grab some markers and poster board and visit the picket line

Like any other protest, picket lines are open to those directly impacted and their allies, unless stated otherwise. They aren’t exclusive to employees, so feel free to make a few signs, text some friends, and walk the picket line in support.

Visiting a picket line also allows the community to get more details on what workers need and how allies can provide support. Do they need bottled water to keep marching in the summer heat? Maybe some hand warmers for a wintertime strike? Could they use snacks? Portable phone chargers? It can make a huge difference to have those needs met. Plus, getting involved is a great way to meet members of your own community with whom you might not otherwise interact. Remember, workers don’t exist in a silo. They’re just as much a part of our communities as anyone else, and joining a picket line could be the first step to strengthening those bonds.

Whether there’s a strike happening in your own city or several states away, getting a few friends together to plan ways to support is a great option. It could be something as easy as making a Google Doc or starting a group text thread to coordinate supplies and rides. Working together can make sure each tactic feels bite-size and manageable, and doing things with other people — especially if it’s your first time supporting a strike — can feel much less intimidating.

Strike support funds, also called economic hardship funds, are probably one of the most easily recognizable ways to support a union from afar. According to McAlevey, whether it’s a shorter strike or one that continues for months, those funds will be depleted. The money is crucial for allowing striking workers to take care of their families, but if their employer decides to remove their health benefits during the strike — which McAlevey says sometimes happens — that fund might need to cover medical expenses too.

“What the employers do very quickly in long strikes — I've experienced it and it is super intense — is that like, day 30, they cut your health benefits,” McAlevey explains. “People are going to need money to pay their bills, feed the kids, and maybe, depending on how abusive the employer is, have a healthcare fund in case someone's getting sick. We're in a pandemic last I looked, so the need for financial support is serious.”

5. Push elected leaders to support the strike through public statements and policy

Though President Joe Biden shared public support for Amazon workers’ high-profile union drive in Bessemer, Alabama, McAlevey describes it as “too little, too late.” No politician at the federal level has yet commented on the more than 1,000 coal miners in Alabama who, like the nurses in Massachusetts, are entering the sixth month of their strike.

“For people who are being called the most pro-labor administration, it is not acceptable that there have not been super-direct interventions,” says McAlevey. “Every smart politician knows how to put their thumb on the scale and help advance a cause. And we are not seeing that yet.”

Pushing elected officials to take a public stance on workers’ rights and share messages of support for specific strikes as they’re happening both encourage striking workers and helps shore up public support for pro-labor policy measures. And according to McAlevey, we’ll need both to build enough worker power to improve people’s lives and save the planet.

Want more from Teen Vogue? Check this out: What a Labor Union Is and How It Works

This story is published as part of Teen Vogue’s 2021 Economic Security Project fellowship.

[Jacqui Germain is the 2021 Economic Security Project fellow at Teen Vogue. Jacqui is a St. Louis-based journalist, trained organizer, and poet, whose work has appeared in outlets including The Nation, The Guardian, The Atlantic, Elle, The New Inquiry, and Vice.]