Now’s the perfect time to fight for the right to return to a job once a strike is over. The United States is experiencing a wave of worker militancy and a White House that actually wants to take concrete actions to defend and grow labor unions. 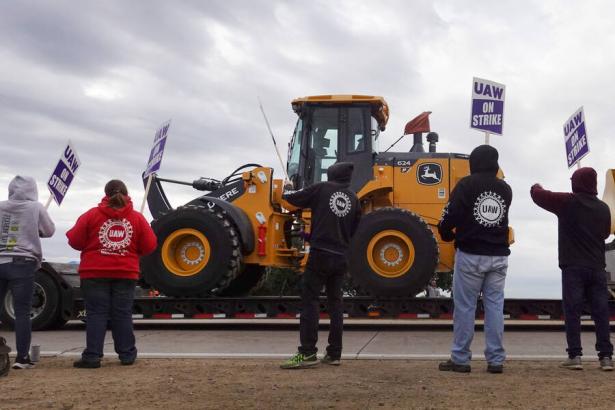 A truck hauls a piece of John Deere equipment from the factory past workers picketing outside of the John Deere Davenport Works facility on October 15, 2021 in Davenport, Iowa., Scott Olson/Getty // In These Times

The United States is experiencing a wave of worker militancy and a White House administration that actually wants to take concrete actions to defend and grow labor unions. That strange sensation you’re feeling is optimism about labor’s prospects, reflected in the giddiness of #Striketober. Let’s take this opportunity to restore the legal right to strike.

A moment in which tens of thousands of workers are on strike — at John Deere, at Kellogg’s, at Warrior Met Coal—might seem like a strange time to talk about a ​“right” to strike. But a legal right to strike must include the right to return to the job when the strike is over — win, lose or draw — and U.S. workers haven’t had that right since corporations and Ronald Reagan’s National Labor Relations Board (NLRB) conspired to weaponize a long-dormant Supreme Court decision to legalize union-busting.

Strikes are contagious. The example set by one group of workers going on strike and returning to their jobs with their heads held high (and their bosses massively inconvenienced) can inspire other workers to take action. But the contagion can cut both ways. A failed strike that ends with the strikers permanently replaced by scabs can spread fear and hopelessness across communities and industries.

The last year that some touted as a ​“strike wave” — 2018, when some 485,000 workers went on strike in over 20 large job actions — still only saw unions return to mid-1980s levels of strike activity. The 1980s were the midpoint of a historic long-range decline in strike activity. What happened, of course, was that President Ronald Reagan fired the federal air traffic controllers in 1981, signaling a new era of union-busting. A so-called ​“PATCO syndrome” kicked in: Workers were afraid to go on strike because it could mean not just the loss of their pay and the other hazards of the strike itself, but because a lost strike could mean the loss of their jobs.

Far more significant, however, was a copper mining company called Phelps Dodge that in 1983 bargained its union to impasse over draconian cuts in benefits and working standards. The company successfully dared its union out on strike, then bussed in scabs and offered them replacement jobs that would continue after the strike was over. And after 12 months, the company had the scabs vote to decertify the union. PATCO was symbolic; Phelps Dodge was the blueprint for getting rid of private-sector unions through failed strikes.

Phelps Dodge dusted off a 1938 Supreme Court decision NLRB v. Mackay Radio that purportedly granted employers the right to permanently replace strikers. And this is where the stars align for #Striketober and the new NLRB: The Mackay decision was poorly decided in the first place, rarely revisited and leaves the labor board with pretty wide discretion to narrow the Mackay doctrine to the point of meaninglessness for rich corporations.

First, it bears stressing that the National Labor Relations Act clearly states, ​“Nothing in this Act…shall be construed so as either to interfere with or impede or diminish in any way the right to strike, or to affect the limitations or qualifications on that right.” And the substance of the Mackay decision actually upheld the right to strike by ruling in favor of an NLRB ruling that the employer could not discriminate against the strike’s leaders. Unfortunately, the patrician judge who wrote the majority’s decision, Justice Owen Roberts, had to put himself in the boss’s shoes and hem and haw about ​“right to protect and continue his business,” during those pesky strikes, ​“by supplying places left vacant by strikers.” And if business conditions required it, he pointlessly opined, he should be able to have the scabs continue after the strike as long as he is not motivated by anti-union animus and he doesn’t discriminate against the strikers for the remaining vacant positions.

Mackay is a very stupid Supreme Court opinion. It introduces a hypothetical scenario that’s not supported by the facts. (The Mackay strike lasted a weekend; there wasn’t even time to hire scabs.) Parts of it are in contradiction with itself and it plainly contradicts the law as Congress passed it. The decision has the appearance of long-settled precedent because of subsequent Court decisions that rejected other employers’ attempts to discriminate against strikers as not being ​“proper under Mackay” and neither the Court nor the NLRB ever seriously investigated what is proper under Mackay.

The NLRB’s new General Counsel Jennifer Abruzzo has signaled that she is willing to reconsider all kinds of twisted and outdated precedents that have vastly favored bosses during a nearly four-decades-long union-busting drive. In an interview with our own Hamilton Nolan, she’s indicated a willingness to issue bargaining orders — not elections — for new unions when employers commit Unfair Labor Practices, to certify minority members-only bargaining units to help unions establish a foothold, and to be more creative about ​“make whole” financial remedies for terminated union activists.

Where does Jennifer Abruzzo’s NLRB have the discretion to punish an employer for hiring permanent scabs? Prompted by a union-filed Unfair Labor Practice charge, it can investigate an employer’s economic needs ​“to protect and continue his business” by hiring permanent replacements. It’s one thing to hire temps, or have supervisors or salaried workers fill in, but what is the economic need to promise scabs permanent jobs? Make them come up with stupid reasons that align with Mackay​’s stupid rationale. Would the John Deere company be in danger of going out of business if it couldn’t offer scabs permanent jobs? Make them open their books and prove it. Would Kellogg’s find it impossible to staff their factory lines if it couldn’t recruit scabs with promises of long-term work? I think the union could find a couple thousand workers who would be willing to work those jobs just as soon as the strike ends.

Unions have the winds at their back because of the unique circumstances of the pandemic making so many workers less willing to work unpleasant jobs for lousy pay, but labor markets have a way of tightening that make striking a riskier proposition for workers. We must take this opportunity to win back our rights for when we’ll really need them again. In any workplace where workers are on strike — or just talking about it — if the boss starts to promise scabs permanent replacement jobs at the end of the labor dispute please file a damn Unfair Labor Practice charge!

[SHAUN RICHMAN is an In These Times contributing writer and the Program Director of the Harry Van Arsdale Jr. School of Labor Studies at SUNY Empire State College. His Twitter handle is @Ess_Dog.]