Roots of the Black Chicago Renaissance

A new collection explores the early twentieth-century artists and institutions that made the Black Chicago Renaissance possible. 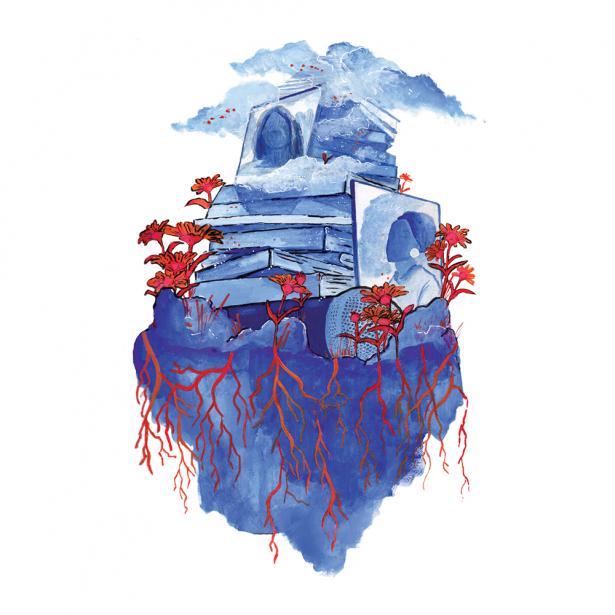 Most cultural movements start small: in the bedrooms of budding orators, around the table at a thrifty pub, or in the margins of an artist’s sketchbook. But humble beginnings are foundations nonetheless. Their  influence, as history tells us, can grow from four people around a table to 4,000 people across a city—all that’s necessary is for a seed to be planted, and for surrounding conditions to foster its growth. Many people know about the richness of the Black Chicago Renaissance, but the midcentury movement that cemented Chicago as a center for Black literary excellence surely required its own foundation, laid by lesser-known names, relationships, and ideas. Pioneers by definition, their stories are chronicled in Roots of the Black Chicago Renaissance, a 2020 collection of essays edited by Richard A. Courage and Christopher Robert Reed.

In the decades following the end of the Civil War, a fresh and righteously freed Black population sought to make a new world for themselves within a world that was still unsure about whether they had the right to one. While most had yet to journey North, early arrivers to Chicago were building the frameworks through which newcomers would be able to flourish, imagine new ways of living, and claim new opportunities. Roots serves as an anthology that honors their contributions, from the writers, artists, and intellectuals who reinvented what Black representation could look like, to the entrepreneurs and financiers who created the spaces that would insulate and incubate Black culture and thought, which continue to influence the city and the world a century later. 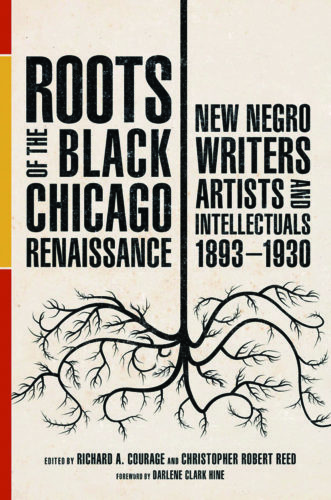 But first, every event needs a convener. 1893 was a critical year in American history for both the ever-expanding white population and the newly freed Black population. Chicago’s World’s Fair was an opportunity for the American nation to represent itself in ways that broke from classical European forms, and it was also an opportunity for Black people to begin thinking about how they ought to represent themselves on the world’s stage. Frederick Douglass, the curator of Colored American Day at the World’s Fair, among other things, would orchestrate one of the first opportunities for freed Black folks to ask themselves this question. Influenced by recent trips to Ancient Egypt and his role as a U.S. delegate to Haiti, his temperament entering 1893 was one that pondered questions of Black pasts and futures, dignity, and civility. The essay “Journey to Frederick Douglass’s Chicago Jubilee,” by John McCluskey Jr., explores how these preoccupations, however valid, would have deep implications for the “tensions within and among urban Black Renaissances of the early twentieth century.” After having to convince much of Chicago’s Black culturati to attend the World’s Fair, the show went on. Singers and musicians like Desiree Plato, Sydney Woodward, and Maurice Arnold Strathotte performed their renditions of Romantic classics.  Paul Laurence Dunbar’s poetry recitations would propel him to national prominence, and a closing from Frederick Douglass himself, in which he spoke to the commendable progress of Black people since the Emancipation, minted the day of events as one that would be formative for the future of Black culture. McCluskey cautions the reader, though, that “in terms of original and vernacular expression, Colored American Day may be important for what it was not.” Douglass’s preoccupations with propriety curated a day of events that didn’t do too much to push the boundaries of what authentic Black expression could look like on the world’s stage. But Colored American Day did provide a stage, a gaping avenue for self-definition and expression for one of the first times in American history.

Another presenter at the World’s Fair managed to set fire to expectations, including those of Douglass, in a speech called “The Intellectual Progress and Present Status of the Colored Women of the United States since the Emancipation Proclamation.” Fannie Barrier Williams was a nationally renowned writer, orator, leader, and settlement house activist who took the world by storm in a speech that reintroduced Black women to the world, and demanded the recognition of their moral authority and democratic participation. Her efforts sought to define “the New Colored Woman,” who she envisioned as community leaders. Women who, contrary to gendered distinctions of the time, balanced professional and service work, worked to create “new and renewed communities,” and were concerned with social and political matters both within the race and in broader contexts.

Her dogma, Black feminist pragmatism, carved out a “third way” to approach race relations, which incorporated both Booker T. Washington’s and W.E.B. Du Bois’s philosophies on the advancement of Black people. This non-confrontational, neighborly approach was influenced by her abolitionist upbringing, as her father was a longtime friend of Frederick Douglass, and she herself was a longtime friend of suffragist Susan B. Anthony. The third way would find Fannie in interracial circles, clubs, and social settlements, representing Black women in spaces where they weren’t typically represented, and working to advance the race by way of influencing and activating other populations.

Her success was apparently threatening. In a reception she organized with the women of the social settlement called the Frederick Douglass Club (FDC), she and a group of women of mixed race had a tea party in protest of Jim Crow social lines in Chicago. This sparked negative reactions from the press, obviously because of the issue at hand, but certainly because of the fact that they were women. Fannie’s grace and knack for leadership landed her in the seats of many institutions. She held offices in the FDC’s Women’s Club and the Chicago Woman’s Club, she was once the president of the Illinois Federation of Colored Women’s Club, and was appointed to the board of the Chicago Public Library by the mayor. Her presence within these spaces, and her emphasis on creating space, made her a trailblazing example of Black womens’ leadership in the early twentieth century, and her friendships with the likes of Ida B. Wells, Irene McCoy Gaines, and Mary F. Waring—to name a few—would create the networks and reverberations necessary for the infrastructure of the coming Renaissance.

Representation at the table, whether it be in boardrooms or classrooms, was important for changing broader perceptions of Black identity. But those spaces, despite having significant influence, were hardly proximate to the majority of working-class Black people. In order for the Renaissance–which originated in exclusive spaces–to begin influencing the broader Black community, it required forms of self-representation and “cultural capital” that would help the masses reimagine what their roles in society could be. The Black Chicago Renaissance and all its colors were contingent upon the formation of black modern subjectivity. People needed to be able to see their likeness in different forms in order to recreate or emulate those forms for themselves. This is where art and Black media played a formative role in building a collective racial identity.

In “Strategies for Visualizing Cultural Capital,” Amy M. Mooney dives into the power of the Black portrait. She specifically focuses on the art of William Edouard Scott and Charles C. Dawson, and the ways they’d deploy the Five Cs—class, character, costume, countenance, and composition—to both capture and manufacture the essence of their subjects. Also instrumental were the ways in which portraiture and other art forms were disseminated. Publications like The Chicago Defender, The Champion, Half-Century Magazine, and Reflexus, were just some of the Black-owned outlets that’d display portraiture and art, let alone writings of and about Black culture. These publications circulated throughout Black communities and would shape and encourage dynamic Black identities.

Scott and Dawson received numerous commissions from Chicago’s Black political leaders, entrepreneurs, and social activists. The essay focuses on how business leaders utilized the arts to influence perceptions. The arts, for this purpose, were deliberate, collaborative, and intentional. For Dawson, through portraiture, drawings, and advertisements, his goal was to portray Black agency; and so themes of Black “history, mythology, and fable” were aided by tropes of “beauty and nobility.” This sentiment shone through in Dawson’s illustrated advertisements, which he did for both banker Jesse Binga and cosmetic mogul Anthony Overton’s respective enterprises.

Scott, most known for his paintings depicting Black life, was attentive to details when it came to composition. In a portrait he painted of Frederick Douglass, he made sure to position him against a background of a wall of books to indicate Douglass’s scholarly nature. He captured the subject’s contemplative gaze, a reflection of the way he was understood, an example for those who would look upon the painting. These goals and intentions around visualizing the culture would do many things for the Black populus. On one hand, commissions from notables like Overton and Robert S. Abbott, the publisher of the Chicago Defender would brand them to the public, setting examples but also facilitating further social and economic progress for themselves and their publications. Mooney speaks to the newspapers and magazines that were backed by the dollars of Binga, Overton, and others, and of the events that would spring about to further promote the work, like the Defender’s annual Bud Billiken parade.

Visualizing the culture would also become the basis through which the culture could critique itself. Mooney uses a quote from Frederick Douglass to contextualize the chapter: “It is only by making ourselves and others objects of contemplation that we can begin to imagine better selves and better futures.” This self-representation, much like the events of the Colored American Day, sparked imaginations and debates about where the race was headed and how it should appear. In a later example, she references the work of Jay Jackson, a satirical artist, which took aim at Overton’s line of skin-lightening creams by using an illustration to critique those with biases toward Black people of lighter skin. These critiques, and the culture of critique writ large, added a nuance to intraracial discourse that made room for more subjectivity and dynamism.

These are just a few examples of the essays that reveal the early workings of what would become a monumental literary and artistic Renaissance in Chicago. Others within the collection dive deeper into the literary groups that would recruit and inspire many, like the Chicago Letters Group, and pioneers like Hazel Thompson Davis, who built a castle out of the Unity Club in Bronzeville to nurture performance artists. The time period of 1893-1930 was a time where Old Settlers (Black people who were already in Chicago) and new Southern migrants would carve out their plots and plant seeds for future generations to observe and build upon. Those seeds would bloom into names that would shape race consciousness until today, with classic works like Richard Wright’s Native Son, Lorraine Hansberry’s Raisin in the Sun, and Gwendolyn Brooks’ Pulitzer Prize-winning poetry. What Roots of the Black Chicago Renaissance captures are the ideas, institutions, and individuals that had to come together in a post-Emancipation America and ask, “Where is the race headed?” Regardless of their individual answers, they laid the foundation for Black people in Chicago and abroad to ask the same question of themselves.

Malik Jackson is the Housing Editor for the Weekly. He last wrote a review of Halfway Home by Dr. Reuben Miller.

The South Side Weekly is a nonprofit newspaper dedicated to supporting cultural and civic engagement on the South Side, and to developing emerging journalists, writers, and artists.

We publish in-depth coverage of politics, the arts, and issues of public interest alongside oral histories, poetry, fiction, interviews, and artwork from local photographers and illustrators.

The Weekly is produced by a mostly volunteer editorial staff and seeks contributions from across the city. We distribute the paper bi-weekly on Thursdays. A full map of our distribution network is available here.

Subscribe to the South Side Weekly to get the print edition in the mail. Issues are published every other week.

Support South Side Weekly with a donation.