A censure resolution is the most severe form of punishment in the House, and stripping a member of committee assignments deprives them of a powerful platform to influence legislation and give voice to constituent priorities.

The House of Representatives voted Wednesday to approve a resolution that censures Rep. Paul Gosar and strips him of his two committee assignments, the first time a sitting House member has been censured in more than 10 years.

The final vote was 223 to 207. Republicans Adam Kinzinger of Illinois and Liz Cheney of Wyoming voted with all the Democrats for the censure resolution. Republican Rep. David Joyce of Ohio voted present, meaning he took no position either way.

Gosar took down the video after facing criticism but did not apologize. About an hour after being censured, Gosar retweeted a tweet praising him that also included the video.

House Democrats have made clear they believe he must face significant consequences for his actions, while many Republicans have argued Democrats are setting a dangerous precedent that could be used against them in the future.

The episode underscores and threatens to worsen the rising tensions and deepening distrust between Democrats and Republicans in Congress.

A censure resolution is the most severe form of punishment in the House, and stripping a member of committee assignments deprives them of a powerful platform to influence legislation and give voice to constituent priorities.

The resolution approved by the House will remove Gosar from the House Oversight and Reform Committee, which Ocasio-Cortez also serves on, and the Natural Resources Committee.

"We cannot have a member joking about murdering each other or threatening the President of the United States," Speaker Nancy Pelosi said in a floor speech.

"Disguising death threats as a video doesn't make it less real," she said. "It's a sad day for the House of Representatives, but a necessary day."

House GOP leader Kevin McCarthy accused Democrats of hypocrisy, arguing that they have not responded to members of their own party in the same way.

McCarthy went on to suggest that Republicans will use the standard that has been set to rebuke Democrats if they retake the majority. "Under the Pelosi precedent, all the members that I have mentioned earlier will need the approval of a majority to keep those positions in the future."

In remarks on the House floor ahead of the vote, Gosar was defiant.

"For this cartoon, some in the current Congress suggest I should be punished. I have said decisively there is no threat in the cartoon other than the threat that immigration poses to our country. And no threat was intended by my staff or me," he said.

"I voluntarily took the cartoon down not because it was itself a threat, but because some thought it was. Out of compassion for those who generally felt offense, I self-censored" Gosar said.

How the censure vote unfolded

Approval of a censure resolution represents a dramatic moment on the House floor. The last time a member was censured was in 2010, when former Democratic Rep. Charlie Rangel of New York was censured by his own party over various ethics violations.

Following passage of the measure, Pelosi asked Gosar to present himself. She then read out the censure and announced the congressman's removal from committee assignments.

When Gosar stood in the well as Pelosi read the censure to him, a group of Republicans joined him. Ocasio-Cortez and Democratic Rep. Maxine Waters of California were sitting in the front row as the censure was read.

In a statement released after the censure, Gosar continued to defend his actions. "President Trump called me his 'warrior' for a reason," he said. "I have been fighting for America First and against the Democrats' efforts to destroy this country with open borders, drugs, illegal immigration and human trafficking all condoned and initiated by the Biden administration."

Joyce, the Ohio Republican who voted present, explained his vote in a statement.

Citing that he is a member of the House Ethics Committee, the congressman said, "I may deem it appropriate to vote present on legislation related to matters that are or could come before the Committee."

He went on to say, "I urge my colleagues on both sides of the aisle to allow the Ethics Committee to do its job and address any alleged violations of the U.S. House of Representatives' rules or any related conduct by House Members, officers, or employees."

The move to censure Gosar follows a lack of action from Republican leadership in the House. McCarthy, who had not commented publicly on the Gosar episode until this week, has said that after the tweet he had called the Arizona Republican, who then deleted it, but he did not explicitly condemn Gosar's behavior.

McCarthy said Gosar had explained his actions during a closed-door conference meeting on Tuesday morning, and his explanation was well received in the conference, according to attendees.

"He didn't see it before it posted. It was not his intent to show any harm," McCarthy told reporters. "What I said to conference was (we) cannot accept any action or showing of a violence to another member."

Amid a backlash against the video, the congressman issued a statement on the video, saying that it "was not meant to depict any harm or violence against anyone portrayed" and calling it "a symbolic portrayal of a fight over immigration policy."

Ocasio-Cortez spoke out against Gosar's actions and inaction by House GOP leadership in remarks on the House floor ahead of the vote.

"In response to the Republican leader's remarks when he says that this action is unprecedented: What I believe is unprecedented is for a member of House leadership of either party to be unable to condemn incitement of violence against a member of this body," she said.

"Our work here matters. Our example matters. There is meaning in our service and as leaders in this country when we incite violence with depictions against our colleagues that trickles down into violence in this country," she said.

"It's pretty cut and dry. Does anyone in this chamber find this behavior acceptable?"

Pelosi said on Wednesday that Gosar could face criminal liability for the video.

"I think threatening the lives of anyone, not just a member of Congress and certainly the President of the United States, should warrant law enforcement attention," Pelosi said.

House Majority Leader Steny Hoyer told reporters on Tuesday that Democrats are not worried about the precedent the action would set if Republicans were to take back the majority next Congress.

"If precedent was set, it was set in the Greene case," Hoyer said, referring to Democrats stripping GOP Rep. Marjorie Taylor Greene of Georgia of her committee assignments following upheaval after her past incendiary comments and apparent support of violence against Democrats surfaced.

"Setting it twice is not going to make a difference I don't think," Hoyer said. "And I know there's comments that we'll do it to you. I don't know, frankly, of any incident that is analogous on our side of the aisle. In any event, if there were an analogous event action ought to be taken Democratic not."

Gosar entered his office on Capitol Hill on Wednesday ahead of the vote, but didn't take any questions. He also has not participated in the two committees meeting Wednesday morning that the House plans to vote to strip him of later.

House GOP leaders had recommended to their members that they vote against the resolution censuring Gosar and stripping him of his committee assignments, according to leadership aides.

This was not a formal whip operation, but they used the same tactic they employed when 11 Republicans joined with House Democrats in voting to strip Greene from her committees earlier this year.

Kinzinger and Cheney both indicated ahead of the vote their plans to support censuring Gosar.

"I'll be voting yes on the Gosar censure resolution," Kinzinger tweeted earlier in the week.

"We have to hold Members accountable who incite or glorify violence, who spread and perpetuate dangerous conspiracies. The failure to do so will take us one step closer to this fantasized violence becoming real," he said.

Cheney said earlier in the week that McCarthy's inaction on Gosar is "indefensible."

"Our party needs a leader who is going to stand up for what's right and stand up for the truth, and stop trying to play these games," Cheney told CNN.

Cheney said she would support both censuring Gosar or stripping him of his committee assignments.

This story and headline has been updated with additional developments Wednesday.

Alexandria Ocasio-Cortez fires back at GOP over Gosar's violent video 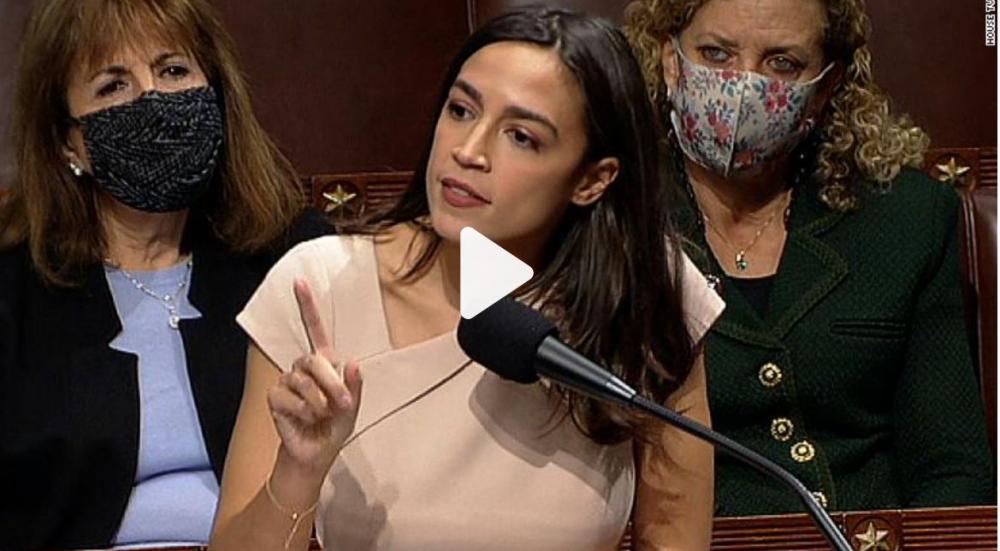 Rep. Alexandria Ocasio-Cortez (D-NY) spoke out on the House floor during the vote to censure Rep. Paul Gosar (R-AZ) over a video posted to his Twitter and Instagram depicting violence and the apparent killing of the Democratic congresswoman.