Unemployment Falls to 4.2 Percent in November as Economy Adds 210,000 Jobs

The rise in the index of aggregate hours would be equivalent to more than 630,000 jobs with no changes in workweeks. Drop in unemployment in Novembers were largest for the groups that face labor market discrimination. 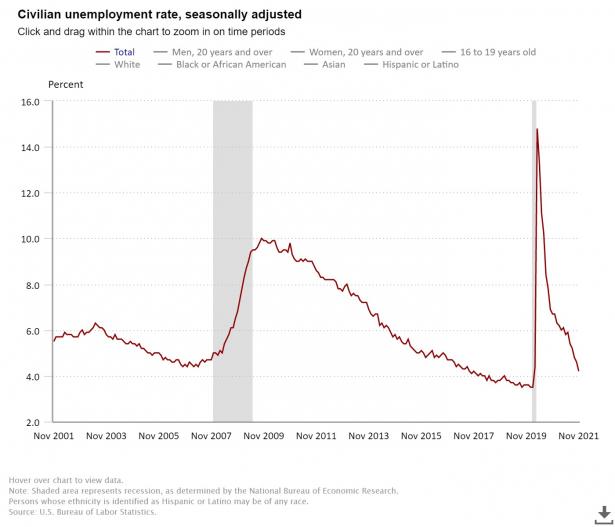 The 210,000 job growth in the establishment survey is slower than generally expected, but it is important to note that it went along with an increase in the average workweek. The index of aggregate hours in the private sector increased by 0.5 percent in November. This would be the equivalent of more than 630,000 new jobs, with no change in the workweek.

This fits a story where employers are increasing hours since they are unable to hire new workers. We are seeing a reshuffling of the labor market where workers are looking for better jobs and employers are competing to attract workers, especially in lower paying sectors.

Nearly every demographic group saw a drop in unemployment in November, but the falls were largest for the groups that face labor market discrimination. The unemployment rate for Blacks fell by 1.2 percentage points to 6.7 percent, a level not reached following the Great Recession until March 2018 and never prior to that time. For Hispanics, the decline was 0.7 percentage points to 5.2 percent.

The share of workers reporting they have been unemployed more than 26 weeks edged up slightly to 32.1 percent. It had been falling rapidly from a peak of 43.4 percent in March. It was under 20.0 percent before the pandemic hit. On the plus side, the share of unemployment due to voluntary quits increased by 1.0 percentage points to 12.5 percent. This share is still low for a 4.2 percent unemployment rate, but the high share of long-term unemployed depresses the share attributable to quits.

The average hourly pay of production workers is up 5.9 percent year-over-year. It has risen at a 6.6 percent annual rate comparing the last three months (September to November) with the prior three months (June to August). For restaurant workers the gains have been even larger, with the average hourly wage for production workers up 13.4 percent year-over-year, although the annual rate of growth slowed to 5.7 percent comparing the last three months with prior three months. Wages for the lowest paid workers are far outpacing inflation. 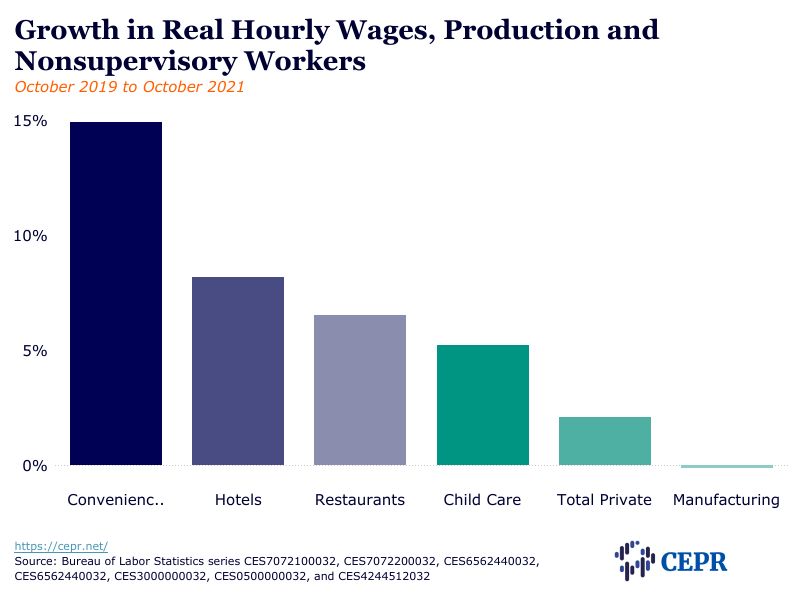 Manufacturing and Construction Both Add 31,000 Jobs in November

This continues a pattern of strong job growth in these sectors. Employment in construction is now down 1.5 percent from pre-pandemic levels, while manufacturing employment is down 2.0 percent.

By contrast, employment is still lagging in the hardest hit sectors. The motion picture industry shed 3,400 jobs in November. It is now down 21.9 percent from pre-pandemic level.

Low-wage sectors are clearly having trouble attracting workers. Nursing and residential care facilities shed 11,000 jobs in November. Employment is now down 423,700 jobs (12.5 percent) from pre-recession level, accounting for most of the drop in health care employment. Childcare lost 2,100 in November, while home health care lost 300 jobs.

Retail lost 20,400 jobs in November. Employment in the sector is now down 1.1 percent from pre-pandemic levels; although the index of aggregate hours is up 1.1 percent.

Restaurants added just 11,000 workers, while hotels added 6,600. However, the index of aggregate hours for the leisure and hospitality sector (which comprises the two industries) rose 0.6 percent. This corresponds to a gain of almost 800,000 jobs with no change in the length of the workweek.

State and local government employment is now down 951,000, or 4.8 percent from pre-pandemic levels. This is almost certainly a supply side story, where these governments cannot easily raise pay to compete with the private sector in attracting workers.

This is another overwhelmingly positive report. The unemployment rate is more than a full percentage point lower than what CBO had projected before the passage of the American Recovery Plan. The most disadvantaged workers are seeing the greatest benefits in pay and employment opportunities. The economy looks to be very strong as long as another surge in the pandemic doesn’t derail it.

The Center for Economic and Policy Research (CEPR) was established in 1999 to promote democratic debate on the most important economic and social issues that affect people’s lives. In order for citizens to effectively exercise their voices in a democracy, they should be informed about the problems and choices that they face. CEPR is committed to presenting issues in an accurate and understandable manner, so that the public is better prepared to choose among the various policy options.

Toward this end, CEPR conducts both professional research and public education. The professional research is oriented towards filling important gaps in the understanding of particular economic and social problems, or the impact of specific policies. The public education portion of CEPR’s mission is to present the findings of professional research, both by CEPR and others, in a manner that allows broad segments of the public to know exactly what is at stake in major policy debates. An informed public should be able to choose policies that lead to improving quality of life, both for people within the United States and around the world.

The Center for Economic and Policy Research (CEPR) was co-founded by economists Dean Baker and Mark Weisbrot. Our Advisory Board includes Nobel Laureate economists Robert Solow and Joseph Stiglitz; Janet Gornick, Professor at the CUNY Graduate School and Director of the Luxembourg Income Study; and Richard Freeman, Professor of Economics at Harvard University. Subscribe to CEPR updates.