A recently published study, found that if everyone living in the United States, aged 25 years or older, died of COVID-19 at the same rate as college-educated non-Hispanic white people did in 2020, 48 percent fewer people would have died. 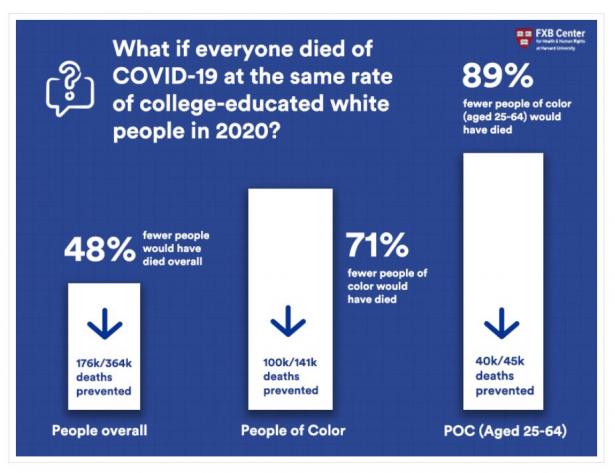 Reports from the Economic Front,

The following infographic includes the actual number of lives that could have been saved.

Feldman and Basset used a newly available public data set on COVID-19 mortality—one that allowed them to group the deaths of all persons in the United States, aged 25 years or older, by age, sex, race and ethnicity, and educational attainment—to test 3 hypotheses:

Finally, as highlighted above, they also estimated the number of deaths that would have occurred if each racial and ethnic population group had “the same cumulative mortality rate as the group that, theoretically, has the most racialized socioeconomic privilege: college-educated non-Hispanic white individuals. We did this by multiplying each stratum’s populations size by the mortality rate observed among college-educated non-Hispanic white individuals of the same age and sex.”

The results of their first hypothesis test—to determine whether racial and ethnic minority populations experience higher age-adjusted COVID-19 mortality rates than non-Hispanic whites—are illustrated in the figure below.  As we can see, in each of the three age groupings, racial and ethnic minorities, with the exception of the Asian population, experienced significantly higher mortality rates than non-Hispanic whites.

Not only did all the racial and ethnic populations, with the exception of Asians, experience far higher COVID-19 mortality rates than did whites, their respective rates were at least twice that of whites. 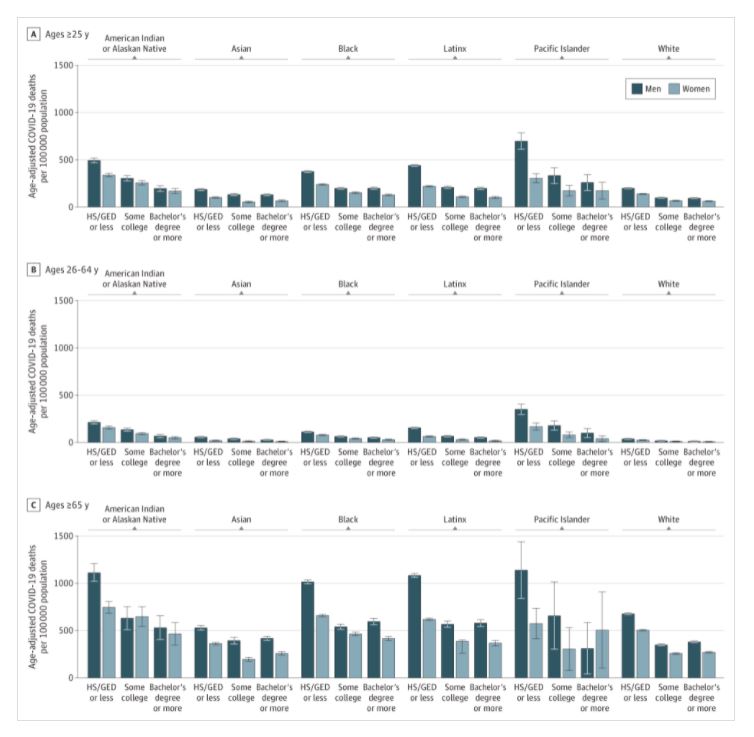 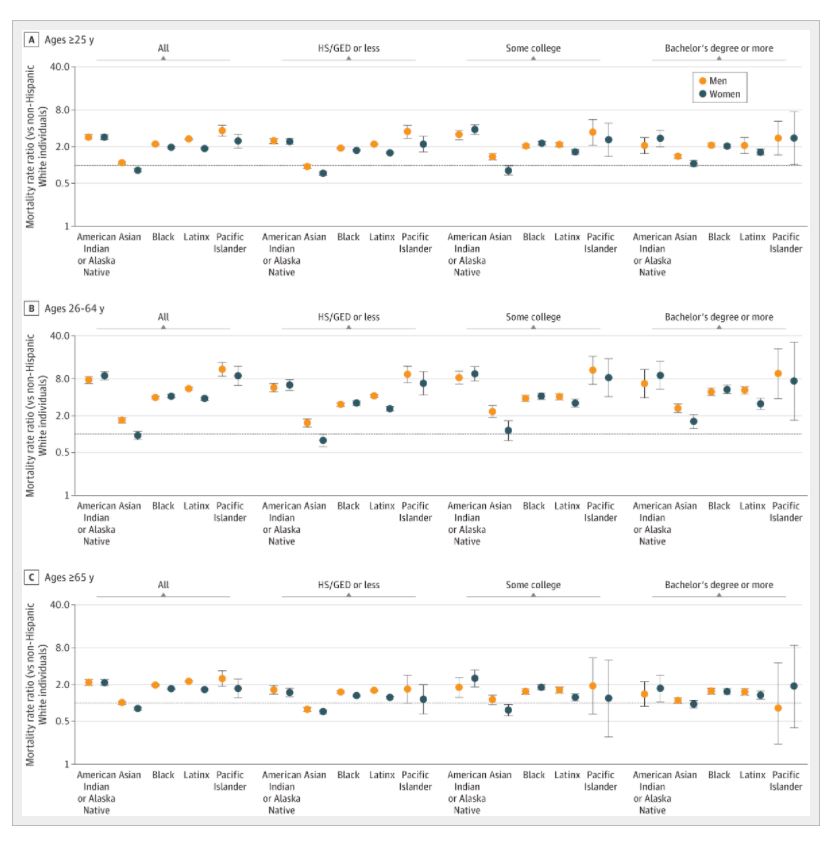 The results for those 26-64 years of age are especially striking.  Despite adjusting for educational attainment, most racial and ethnic subgroups experienced mortality rates two to eight times greater than their white counterparts.  This extreme divergence in COVID-19 mortality rates can only be understood in light of the country’s long history of racially motivated policies and the resulting extreme differences between most whites and people of color in earnings, wealth, quality of housing, access to health care, and conditions of employment.

The size of this divergence does not mean that we should dismiss the challenges facing many non-Hispanic whites.  Their mortality rates are no gold standard. Tragically, however, the racism that underpins this divergence also continues to be a major driver of white support for politicians who oppose policies that could help reduce mortality rates and improve living and working conditions for most workers, like the establishment of a single-payer healthcare system. The cost of racism remains extremely high in this country.

[Martin Hart-Landsberg is Professor Emeritus of Economics at Lewis and Clark College, Portland, Oregon.  He is the author of seven books on issues related to globalization and the political economy of East Asia. His work has been translated into Hindi, Japanese, Korean, Mandarin, Spanish, Turkish, and Norwegian. He has also published numerous articles in journals such as Monthly Review, Review of Radical Political Economics, Critical Asian Studies, Historical Materialism, Against the Current, and the Journal of Contemporary Asia. He is the chair of Portland Rising, a committee of Portland Jobs With Justice, and a member of the organizing committee of the Workers’ Rights Board (Portland, Oregon).]