For a vast majority of Americans democracy ends when work hours begin. Most people in this country are subject, as workers, to the nearly unmediated authority of their employers, which can discipline, sanction or fire them for nearly any reason 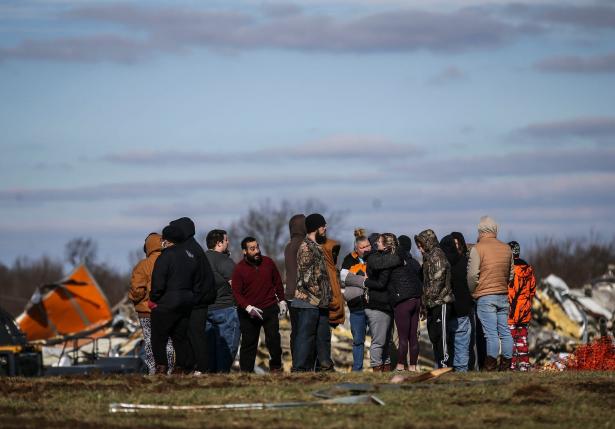 Families gather at the site of a candle factory in Mayfield, Ky., that was destroyed by a tornado on Friday, killing eight people., Credit: Matt Stone/Louisville Courier Journal/USA TODAY Network // New York Times

In other words, Americans are at the mercy of what the philosopher Elizabeth Anderson calls “private government,” a workplace despotism in which most workers “cede all of their rights to their employers, except those specifically guaranteed to them by law, for the duration of the employment relationship.” With few exceptions — like union members covered by collective bargaining agreements or academics covered by tenure — an employer’s authority over its workers is, Anderson writes, “sweeping, arbitrary and unaccountable — not subject to notice, process, or appeal.”

If “private government” sounds like a contradiction in terms, that is only because in the modern era we have lost an older sense of government as an entity that, as Anderson says, exists “wherever some have the authority to issue orders to others, backed by sanctions, in one or more domains of life.” The state, then, is simply one kind of government among others, albeit one with a monopoly on the legitimate use of force.

For most of human history, the state itself was essentially private; few individuals outside of the ruling class had any standing to question its decisions or demand accountability for its actions. The extent to which the state is public at all is, as Anderson notes, “a contingent social achievement of immense importance,” the result of a centuries-long struggle for “popular sovereignty and a republican form of government” such that the state is now “the people’s business, transparent to them, servant to their interests, in which they have a voice and the power to hold rulers accountable.”

With that in mind, to say that most workers are subject to unaccountable “private government” is to make clear the authoritarian character of the American workplace. And it is to remind ourselves that in the absence of any countervailing force, the bosses and managers who wield that authority can force workers into deadly environments and life-threatening situations, or force them to remain in them.

That is what appears to have happened on Friday at the Mayfield Consumer Products factory in Mayfield, Ky. There, more than 100 people, including seven prisoners, were on the night shift, working even after tornado sirens sounded outside the facility. “People had questioned if they could leave or go home,” one employee told NBC News in an interview. But, she said, they were warned: If they left, they were “more than likely to be fired.”

When a powerful tornado did bear down on the factory, it was so strong that there was nowhere safe to hide, according to Andy Beshear, the governor of Kentucky. When the storm cleared, eight people on site were dead and eight others were missing. Three hours north, in Edwardsville, Ill., a similarly powerful tornado hit an Amazon warehouse, killing six people. There, too, workers had been toiling in the midst of severe weather.

Had either of these groups of workers been empowered to say no — had they been able to put limits on work and resist unsafe working conditions — they may have been able to protect themselves, to leave work or miss a shift without jeopardizing their jobs. In the absence of that ability, they were, in effect, compelled to work by the almost sovereign power of their respective employers, with horrific consequences for them, their families and their communities.

Put another way, these disasters cannot be separated from the overall political economy of the United States, which is arguably more anti-labor now than it’s been at any point since Franklin Roosevelt signed the Wagner Act in 1935. A society organized for capital — a society in which most workers are denied a meaningful voice in their place of employment — is a society where some workers will be exposed, against their will, to life-threatening conditions.

The immediate solution is as it always has been: unionization, collective bargaining and workplace democracy. This is easier said than done, of course, but it still must be said. Our democracy is and will remain incomplete for as long as most Americans work without power or representation under the authority of private governments. Whatever democratic habits we hope to instill in ourselves and our children cannot be sustained, in the long run, when democracy is banned from the shop floor.

Or, as the sociologist Oliver Cromwell Cox once wrote, “The people are not free when a relatively few masters of industry could deny them control of their resources” — and to that, one might add control of their selves.

[Jamelle Bouie became a New York Times Opinion columnist in 2019. Before that he was the chief political correspondent for Slate magazine. He is based in Charlottesville, Va., and Washington. @jbouie]