Expanding the Tones of Christmas - In Search of Black Santa

My kids shouldn’t have to color their Santa Claus figurines with brown ink like I did. “America is less and less white, but a melanin-deficient Santa remains the default in commercials, mall casting calls, and movies,” - Aisha Harris. 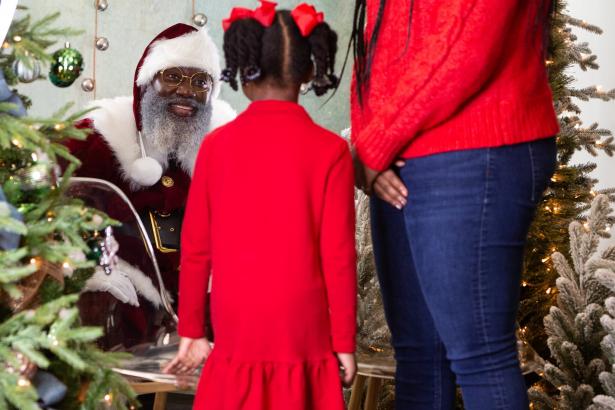 When I was growing up, no Christmas was complete without a variety of brown markers, crayons and colored pencils scattered across our kitchen table for the duration of the holiday season. Well before diversity in merchandising was a thing, my mother, like many Black parents in the 1980s and 1990s, always MacGyvered peach-skinned Christmas figurines into mirror images of our own family. Mom carefully colored in the faces of elves on ornaments, angel tree toppers, carolers on Christmas cards, and, most importantly, all iterations of Santa Claus himself got the brown marker treatment.

Our Santa was Black, but to young me he wasn’t Black Santa. He was simply Santa, no adjective required. Sometimes Mom told me we had to color in his face because of a shortage of brown ink everywhere, a flimsy excuse I was naïve enough to believe until larger plot holes in the Santa story started to reveal themselves when I was around 10 years old.

For the next two decades, I didn’t think much about Santa Claus until I gave birth to my son in the summer of 2011. That Thanksgiving, we were gifted an adorable hand-me-down baby Santa suit, and as I stuffed my son’s chunky brown body inside, I felt giddy with nostalgia about my own childhood. Ready to recreate the same holiday wonderland I grew up with, I went decoration shopping with my heart — and my wallet — wide open. Both quickly snapped shut when it became apparent that although 20 years had passed since my childhood, images of Santa remained as homogeneous as ever.

Like my mom had done, I scribbled faces with brown ink. But my coloring in was colored by a healthy dose of indignation — a luxury my mother, who grew up in rural Jim Crow Virginia, was not afforded. Mom was raised in the same place and time as the wrongfully-executed Martinsville Seven, and was still there teaching in a segregated first-grade classroom the day Martin Luther King Jr. was murdered. On the scale of racial traumas experienced in her life, coloring in Santa’s face was near the bottom of affronts.

But for me, the dearth of dark-skinned Santas felt personal, as though my family’s image was being snubbed. Instead of #OscarsSoWhite it was #SantasSoWhite, and it wasn’t just Christmas tchotchkes that were disappointingly undiverse, either. Movies, TV shows, picture books and all other forms of mainstream media almost exclusively featured white Santas. These mass-produced Santas didn’t necessarily reflect our private realities: The actor George Takei has memorably described a visit from Asian Santa while he and his family were horrifically and unfairly jailed in an internment camp for Japanese Americans.

It would take years before these one-off stories would snowball into the movement for Santa diversity that is flourishing now. This was 2011, in the nascent days of Instagram and Pinterest, so the only influencer in my search for brown-skinned Santas was Google. I used the search engine to source an Atlanta-based Etsy seller, who sent my son personalized letters from Black Santa. On eBay I won expensive but exquisite homemade ornaments and handmade clothing.

I spent hours on the phone cold-calling various places around Los Angeles until I finally found Langston Patterson, one of the few Black mall Santas in America at the time. Getting my son’s picture taken with this dapper St. Nick was the highlight of our Christmas, and we looked forward to it every year until my on-air hosting job relocated my family to New York City.

I presumed it would be easier to find a Black Santa Claus in the world’s most diverse city, and it was, but only because my show’s executive producer was a generous Black mom who took me under her wing and gave me the inside scoop. Like Harriet Tubman navigating folks along the Underground Railroad, she and her daughter benevolently shepherded my family on a journey to find Macy’s secret Black Santa, referred to by the department store as “Special Santa” and only available by word-of-mouth.

At Macy’s we waited in a slow-moving line with the “traditional” white Santa tucked away in a room at the end, until a specific elf appeared. My mommy mentor leaned toward the elf’s pointy ear, whispering, “We’re looking for Special Santa.” The elf nodded and gave us a thumbs up. Shortly thereafter, another elf escorted us to a separate but equally long line, where we waited until a jolly Black Santa magically appeared and made my 2-year-old son’s season by giving him a fist bump and a high five.

In the cab ride home, as our satisfied son slept in his car seat, my husband and I briefly chewed on the absurdity of this extremely othering experience, but I was too exhausted to feel anything but proud that we had successfully kept my child’s love of Santa Claus alive for another year.

Two days after our visit to Macy’s, Aisha Harris published a hilarious essay in Slate that expressed what I was experiencing firsthand. “America is less and less white, but a melanin-deficient Santa remains the default in commercials, mall casting calls, and movies,” she wrote. “Isn’t it time that our image of Santa better serve all the children he delights each Christmas?”

The next day the TV host Megyn Kelly responded with an infamous tirade proclaiming that Santa and Jesus are white. She spoke directly to the camera to assure any children watching Fox News that despite anything they may have heard, Santa was absolutely white, and that anyone who thought otherwise was not only incorrect, but preposterous.

As a mother, I was incensed. As a storyteller, I was determined to prove her and other close-minded people who thought like her to be on the wrong side of history. And I wasn’t alone. As I plotted away over the years on the manuscript for my new picture book, “The Real Santa,” which is the Black Santa Christmas story I wanted my children to read, other fed-up entrepreneurial folks started taking action, too.

Now ex-NBA star Baron Davis’s Black Santa Company, a small-town gift wrap company brilliantly named Wrappers Delight and other seasonal businesses are plotting a future where no child will ever have to color in another Christmas decoration again.

Our efforts are working. Mine is one of at least three picture books being published this year featuring non-white Santas. We all have very different takes on what he might look like, and the more representation the merrier.

Let’s ditch the notion that there’s just one iteration of Santa and stop fighting over whose interpretation is correct. It’s time we put the power of the Christmas narrative in the most precious and important place — a child’s own imagination.

[Nancy Redd is an on-air host and author of multiple books, including “Bedtime Bonnet” and “The Real Santa.” She is also the beauty and health product reviewer at Wirecutter.]