Without putting up a fight, it shelved its own plan to reverse Trump’s course, dimming hopes for peace talks. 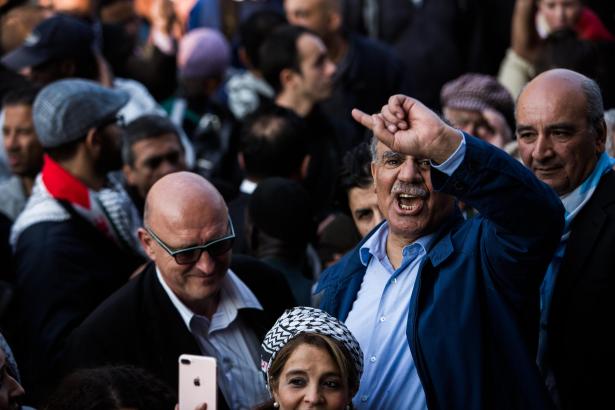 Salman El Herfi, Palestinian ambassador in Paris, at a rally in Paris in the aftermath of Trumps's transfer of the US embassy from Tel Aviv to Jerusalem and the closure of the Palestinian consulate., Raphaël Lafargue/ABACAPRESS.COM

In 2018, President Donald Trump decided to move the United States Embassy in Israel from Tel Aviv to Jerusalem. Simultaneously, Trump merged the U.S. Consulate in East Jerusalem, which had been serving as a point of diplomatic contact with the Palestinian Authority, into the embassy. Of all of Trump’s decisions, moving the embassy and downgrading the point of contact with the PA was one that Palestinians finally could not stand for. They severed contacts with Washington.

Joe Biden came into office with the modest goal of restarting discussions with both Israel and the Palestinians aimed at a two-state solution that fewer and fewer people believe is even possible. Last May, Biden vowed to reopen the consulate, and this past September, Palestinian Prime Minister Mohammed Shtayyeh urged him to fast-track the process.

But Israel has been firm in its opposition to the idea, and last week, the Biden administration shelved the idea, which had not moved forward in any way. In response, Khaled Elgindy, senior fellow at the Middle East Institute, tweeted, “If you needed proof that a two-state solution is dead, here it is. If the US can’t even muster up the will to reopen its own consulate, how does anyone imagine this or any US administration will convince Israel to divide Jerusalem, handover all/most of the West Bank and evacuate at least 200,000 settlers?”

Elgindy’s point is important, but it raises the question of how Washington might have accomplished reopening the consulate over Israeli objections. It is not a simple matter to establish a diplomatic office when the government that controls that area, in this case Israel, is opposed to it.

Lara Friedman, president of the Foundation for Middle East Peace, explained: “A diplomatic mission operates as, literally, an island of foreign sovereignty within the territory of the host country, staffed by foreign diplomats who (for the most part) enjoy immunity from the jurisdiction of the host government… to forcibly enter those embassies would be tantamount to an attack on the country itself.”

In other words, any diplomatic mission, whether it is called an embassy, a consulate, or some other name, is essentially a small piece of land that the host country cedes to another country. The United States cannot and would not forcibly establish such an office without permission from the host country. It would not do that with any country, friend or foe, and certainly not one with whom it has a “special relationship” such as that with Israel. It would, essentially, be an invasion, an act of war.

Even if a country decided that, since East Jerusalem is occupied territory under international law, it could go ahead and establish such an office — something that the United States would never even consider — practical concerns would make this impossible, as Friedman explains.

“Only a host country can decide whether to issue diplomatic visas to people sent by a foreign country,” she wrote, “and without such visas there is no diplomatic immunity for diplomats (and the U.S. will not send diplomats abroad in such a situation).”

While it was never possible for the consulate to open over Israeli objections, that doesn’t mean that an initial Israeli “no” had to close the issue. If the United States was committed to opening the consulate, it has ways to at least try to press Israel to agree. As Friedman explained, Israeli opposition is ultimately decisive, but there is no indication that there was any serious attempt to change the Israeli position.

The Biden administration has been able to resuscitate some dialogue with the Palestinian Authority, but this has largely been relegated to technical and economic issues, with virtually no discussion of high-level diplomacy. When the consulate was merged with the embassy, diplomatic efforts with the PA were placed under the auspices of a “Palestine Affairs Unit” within the embassy. It is the symbolism of that downgrade that is crucial to the Palestinians. Restoring the consulate is the only realistic way to address that issue, but it was always going to be an uphill battle.

The new Israeli government is a thin coalition, led, for now, by its most right-wing member, Naftali Bennett. But while much of the Israeli right sits outside of this coalition, most of the governing coalition still treasures the fact that Trump’s move of the embassy to Jerusalem recognized the whole city de facto as Israel’s capital. Granting Palestinians a renewed political presence in the city in the form of a U.S. mission focused on the PA would be extremely unpopular with most of the Israeli public, including most of the supporters of the current governing coalition. Bennett could not simply agree to such a thing even if he wanted to.

On the other hand, if Biden is serious about reviving any kind of peace process between Israel and the Palestinians or even repairing the breach Trump widened so greatly, he must give Palestinian President Mahmoud Abbas some way to demonstrate to his dwindling number of supporters that there is still hope in a U.S.-brokered negotiation.

And this is where Elgindy’s observation is so pertinent. If Biden and Secretary of State Antony Blinken didn’t realize that Israel would not be immediately willing to allow the consulate to reopen, this raises a serious question about their preparedness for dealing with their sometimes-prickly ally. If they did realize it but were unwilling to put pressure on the Bennett government, then they were never going to succeed in getting Israel to relent, raising the question of why they said they would do it at all.

So, Elgindy is rightly asking, if the Biden administration is unwilling to press Israel on this point, they are certainly not going to press on the much more consequential and difficult questions involved in a two-state solution. After all, the re-opening of the consulate would only be restoring one, relatively minor piece of the status quo ante before Trump upended decades of a fragile understanding on the issue of Jerusalem. And aside from simply asking the Israelis about it, it seems the Biden administration didn’t even try to get this done.

In an op-ed published this week, the hawkish Foundation for the Defense of Democracies suggested that the Biden administration should do just what it has done — nothing and simply hope the issue “blows over.”

Of course, FDD understands this can’t just “blow over.” Trump made a significant change to the status quo in Jerusalem and essentially eliminated the one American symbol that recognized that a Palestinian, as well as an Israeli, claim to the city still needed to be decided. Leaving the situation as it is cripples Washington’s ability to broker talks between Israel and the Palestinian Authority on a two-state or any other solution, which suits both Israel and FDD just fine.

If the United States, or any other party, wishes to see Palestinians and Israelis back at the negotiating table, they will have to find a way to convince Israel to allow the Palestinians an equal voice in those talks. Without reversing Trump’s action that pushed Palestinians even farther out of Jerusalem, without a willingness to put even the modest pressure on Israel that previous U.S. administrations have, Elgindy is right: there is no hope for any negotiated solution.

Mitchell Plitnick is president of ReThinking Foreign Policy. His previous positions include vice president at the Foundation for Middle East Peace, director of the US Office of B’Tselem, and co-director of Jewish Voice for Peace. His writing has appeared in Ha’aretz, the New Republic, the Jordan Times, Middle East Report, the San Francisco Chronicle, +972 Magazine, Outlook, and other outlets. He was a columnist for Tikkun Magazine, Zeek Magazine and Souciant. He has spoken all over the country on Middle East politics, and has regularly offered commentary in a wide range of radio and television outlets including PBS News Hour, the O’Reilly Factor, i24 (Israel), Pacifica Radio, CNBC Asia and many other outlets, as well as at his own blog at www.rethinkingforeignpolicy.org

Responsible Statecraft is the online magazine of the Quincy Institute for Responsible Statecraft. It publishes outside contributors and reporters as well as staff  analysis, opinion, and news to promote a positive, non-partisan vision of U.S. foreign policy — and the ideologies and interests behind them — that have mired the United States in counterproductive and endless wars and made the world less secure.

The views expressed by authors on Responsible Statecraft do not necessarily reflect those of the Quincy Institute or its associates.