The scariest thing about Don’t Look Up is that absurd as it is, it barely exaggerates. Much of our political elite are just as greedy and foolish, our media just as vapid, and our response to impending disaster exactly as mind-bogglingly irrational. 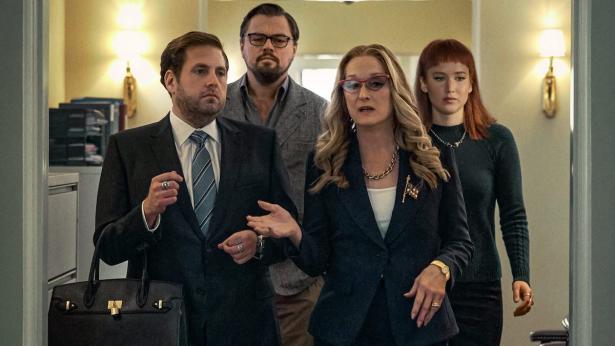 The times we live in are both shot through with menace and impossibly stupid. This is one of the defining features of this political era, and yet I can’t think of many movies in the post-2016 years that capture this dynamic, or even bother to try, like Adam McKay’s Don’t Look Up.

The marquee productions about capital “P” politics in the Donald Trump years had plenty of the former. Vehicles like The Post and The Comey Rule filtered the news we all sat around watching and reading after the 2016 election through the lens of a 1970s-style political thriller, and were celebrated for flattering establishment biases. The heroes were institutions like the press and the FBI, nobly defending norms and democracy from a Nixonian assault unparalleled in its danger. It’s no coincidence this came at a time when much of the establishment had convinced themselves they were on the verge of uncovering a sprawling espionage scandal and dictatorial conspiracy all in one.

Don’t Look Up feels a much better fit for the reality we’re actually living through. There’s no villainous authoritarian ending democracy; as in our world, American democracy in the film has already been smothered under the weight of oligarch money and corporate profit-chasing. There’s no secret evil conspiracy, at least in the salacious form these Trump-era stories imagined; the villains are a self-obsessed, blinkered elite, and it’s their greed, venality, and stupidity that lead them to evil decisions.

If nothing else, the discourse now swirling around the movie has probably clued you in that it’s an allegory for climate disaster. Astronomers Kate Dibiasky (Jennifer Lawrence) and Randall Mindy (Leonardo DiCaprio) discover a comet the size of Mount Everest making a beeline for Earth, and determine (after desperately triple-checking and rechecking) that it’s set to cause an apocalyptic event of the kind that killed the dinosaurs in only six months’ time. They soon fly to Washington to brief the president.

Climate change has long been compared to an approaching asteroid by incredulous scientists and activists who ask, as they tear their hair out, if we’d respond with the same denial and delay to the kind of planetary disaster immortalized in end-of-history blockbusters like Armageddon. Those movies have conditioned us to assume that no, we’d put together a plucky team of characters, rough around the edges but with a lot of heart, who, with the help of modern science and unlimited government resources, would win out over the space rock. Their only obstacles would be their own personal issues, their inability to work as a team, and the immensity of the task itself.

McKay and David Sirota, the journalist, Jacobin contributor, and former Bernie Sanders speechwriter who cowrote the film’s story, flip that timeworn scenario on its head. What if stopping the actual disaster wasn’t the hardest part? What if the hardest part was convincing anyone to even bother trying?

Dibiasky and Mindy are frustrated every step of the way in their efforts. The head of NASA — a political donor, we later learn, with no background in astronomy — at first doesn’t believe it. President Orlean (Meryl Streep) and her dimwit son and chief of staff, Jason (Jonah Hill), initially blow them off, then look for a rationale to delay doing anything about it; the midterms are coming up, after all. The press is mostly uninterested, and the one establishment paper that treats the story as the blockbuster it is quickly gives up on it after the White House disputes the science. The duo lands on a popular morning show, but an exasperated Dibiasky is ignored and mocked after what looks like an on-air meltdown.

Things don’t get much easier once the government finally does take the threat seriously, a version of what might happen if Michael Bay’s oil drillers had to operate in our world of cultural polarization, runaway greed, and social-media-driven psychosis. In all its absurdity, the movie is a depressingly accurate portrayal of this specific era, from the vapid media landscape and the foibles of social media stardom to its mock political ad of a suburban mother earnestly telling the camera that “the jobs the comet’s gonna create sound great.”

All of this would be moot if the movie was no good. Thankfully, the movie is rooted in terrific comedic performances from a stacked cast — the two leads in particular — who keep us caring about their characters even as they dare us to give up on them. Mindy becomes intoxicated with his own microcelebrity and becomes little more than a government flack. Dibiasky checks out of the struggle entirely in sullen apathy. It’s remembering what truly matters — human connection, relationships, the small pleasures like sitting around a dinner table together — that brings them back from the brink, even as the planet slides over it. The result is at once entertaining, tense, and devastating.

The film thankfully swerves away from one of the worst impulses of post-Trump discourse and its anti-populist tendencies. Critics have charged the filmmakers with smugness and contempt for ordinary people, portraying a country too stupid to save itself. They’re wrong.

The people of the world of Don’t Look Up decidedly aren’t the problem. Bar patrons coax the horrible truth about the government’s inaction out of our heroes and respond with concern and violent outrage. A sweet Midwestern Christian boy played by Timothée Chalamet casually assumes the comet isn’t real, but changes his mind with evidence and exceedingly gentle persuasion. At a Trump-like rally, Jason implores the crowd that they “Don’t look up,” until a doughy, red-hatted attendee does, and sees the comet clearly streaking right at them. “Fucking lied to us!” he yells.

In a reversal of the prevailing liberal narrative since 2016 — which either casts all ordinary Trump voters as irredeemable, bigoted villains, to the point of fantasizing that they lose their health insurance, or dumps the blame on nonvoters for failing their politicians — it’s the country’s elites and institutions, including the media, that are the real problem in Don’t Look Up. All corrupted by money, they mislead, manipulate, and distract the rest of us from what really matters. Maybe this is why the film’s been met with surprising hostility from a lot of the mainstream press, which have complained chiefly about the film’s lack of subtlety.

But subtlety isn’t always a virtue. Dr. Strangelove, the Cold War classic that McKay’s film has been widely and justifiably compared to, was hardly a masterclass in understatement, featuring a US military advised by a Nazi scientist with a sentient, murderous hand, and its final shot of a cowboy pilot practically orgasming on top of a falling nuclear warhead. There are different ways to make a movie, and not every climate film has to be Paul Schrader’s excellent First Reformed. The impressive streaming numbers for Don’t Look Up so far suggest McKay and Sirota’s approach has been the right one for their purposes of shaking the public by the shoulders and begging them to pay attention.

I’m also not convinced the movie is as aggressively obvious as its critics charge. My immediate thought after watching the movie went to its restraint. If you’re not one of the relative minority of people hyperaware of climate change or familiar with the movie before it came out, there’s little to suggest its central allegory, short of a handful of brief shots of polar bears and other wildlife in end-of-the-world montages. It’s all ambiguous enough that, both anecdotally and based on the movie’s reception so far, a not insignificant chunk of people thought it was actually about the pandemic. Critics would do well to remember most people aren’t highly educated, habitual news consumers like themselves.

The Strangelove comparisons stick because both movies do a similar thing: They take a fundamentally absurd, nonsensical piece of logic that’s central to our politics — the nuclear policy of mutually assured destruction in Kubrick’s film and the denial of and even profit-making delusions toward the climate crisis in McKay’s — and let them play out in front of us. The results are laughable and unbelievable. It’s insane that people in power and influence would jeopardize stopping the literal apocalypse because they either saw it as a moneymaking opportunity or because they didn’t want to talk about bad news.

And yet this is the maddening reality of the climate crisis today, where business and political figures insist that preventing planetary disaster is too expensive and would cost jobs, and probably the most progressive anchor on cable news casually justifies the lack of his network’s climate coverage on the basis that it’s a “ratings killer.” Just last week, one of the nation’s top newspapers giddily celebrated that leaders around the world were abandoning their climate pledges and “starving the issue of political oxygen,” something it labels “climate realism.”

For all the critics’ concerns that the movie is undermining its own goal, or that it’s stealing the thunder of hardworking climate campaigners, it’s worth looking to actual scientists and activists. There the film has been near universally positively received, one of the few bright spots in a year full of gloomy climate news. The gripes about its lack of subtlety haven’t landed with climate scientists, who instead recognize the scenes of the astronomers vainly trying to warn a pair of professional cable news morons not as over-the-top satire but as a reality they’ve lived through.

The scariest thing about Don’t Look Up is that absurd as it is, it barely exaggerates. Much of our political elite are just as greedy and foolish, our media just as vapid, and our response to impending disaster exactly as mind-bogglingly irrational as in the movie. But there is one major difference (and it does involve a spoiler): it may be too late for the characters in Don’t Look Up, but it’s not for us in the real world. Let’s prove McKay wrong by not sharing his characters’ fate.