Hard looks at SCOTUS and democracy in crisis 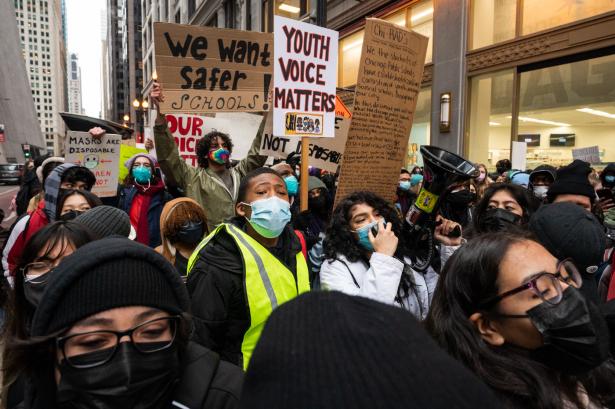 Hundreds of Chicago Public Schools students gathered outside of CPS headquarters on Jan. 14, 2022 during the district-wide walkout to voice their demands of safety amid COVID-19, and for their voices to be heard. Credit, Colin Boyle/Block Club Chicago

We Can Save Democracy

Fed up, everyday citizens are stepping up to reverse a whole slew of assaults on our democracy—from voting rights to gerrymandering to removing money's grip.

The SCOTUS Road to Hell

The conservative justices could impede government agencies’ ability to act independently of Congress by giving more power over their decisions to the conservative-leaning federal judiciary.

The Triumph of Toxic Masculinity

Papa Was a California Hate Cultist

My mother’s oldest sister met my father at an Ásatrú Free Assembly gathering in Berkeley, California, in the early 1980s. Though it was whites-only, its founder, Stephen McNallen, claimed the group was “folkish,” and it took my aunt a while to understand the significance of the term.

Buffy the Vampire Slayer’s creator Joss Whedon was once master of all things nerdy, ushered in by a devoted fanbase. He leaves behind a tainted legacy.

By Nancy Jo Sales
The Guardian

Maxwell had reason to believe she would get away with her crimes – she was a rich, well-connected member of the elite.

The Dregs of Cold War Liberalism

By Daniel Steinmetz-Jenkins
The Baffler

To the embattled liberal, the United States is experiencing a prolonged post-imperial decline—that the “American century” is over. A loosely affiliated school of thought calls for a new Cold War liberalism, instead of confronting growing wealth inequality brought on by neoliberalism.

A dozen states have so-called trigger laws set to ban all or nearly all abortions the moment the Supreme Court delivers a favorable decision. Ten more have similar laws that could quickly follow suit. To counter the momentum, abortion providers and women’s health advocates have been scrambling to advance new initiatives.

Antisemitic fliers that appear to link Jewish people with the anti-vaccine movement were discovered at several elementary and middle schools in Santa Monica on Thursday morning, the latest in a spate of similar incidents across Los Angeles County, authorities said.

Chicago Students Walk Out Over Covid

Though the district and teachers reached a deal for classes to resume, students say they felt left out of the decision making process. They want more remote learning options and access to testing and masks.