“Our goal really is to stop the 24-hour shifts. It should have stopped six years ago when these women first spoke out — working through the night and literally breaking their bodies.” 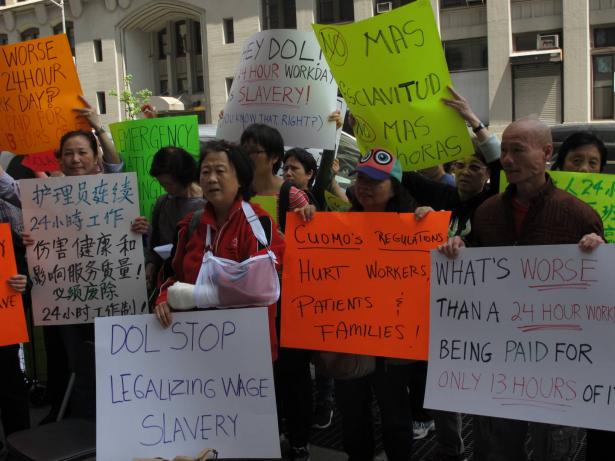 A group organizing home health-care workers denounced the arbitrated settlement in which 1199SEIU will receive $30 million to reimburse workers who put in 24-hour shifts but got paid for only 13 hours. The Chinatown-based Ain’t I A Woman Campaign on March 1 called it inadequate, “a shameful historic low for women in the labor movement.”

Under the settlement, which the union announced Feb. 28, 42 home-care agencies will contribute $30 million to its back-pay fund for the workers, who are overwhelmingly immigrant women. But the Ain’t I A Woman Campaign estimates that the Chinese-American Planning Council, whose almost 7,000 employees make it the second-largest of those agencies, just by itself owes $90 million in stolen wages over the 8¾-year period, from 2013 to 2021, covered by the settlement. It said the agency owes one worker, Lai Yee Chan, $247,000 for six years of 24-hour workdays.

The workers affected will get significantly more than $250 each, an 1199 spokesperson told LaborPress. The $250 figure is actually the per-capita formula the arbitrator assessed each agency to finance the fund.

The union also estimates that only 5 to 7% of its members in the home-care industry work 24-hour shifts, about 5,000 to 8,500 workers. Most home-care aides, the spokesperson said, work much shorter shifts, such as spending four hours helping an elderly or disabled person with cleaning, shopping, or bathing; the 24-hour shifts are for people who need round-the-clock care.

Under state regulations, however, workers who spend 24 hours with a client only get paid for 13 hours. The other 11 hours are supposed to be for sleep, meal, and rest breaks — although in reality, those breaks are often interrupted for tasks such as turning the client over so they don’t develop bedsores. In 2019, a state appeals court ruled that workers could get paid for those 11 hours if they filed a claim that their breaks had been interrupted.

1199SEIU said it could not provide specific figures on the range of how much back pay individual workers are owed, or how much they might get from the fund.

However, at a meeting with Chinese-American Planning Council workers in April 2019, an 1199 lawyer told them that “we estimate that if everybody got paid what they were owed from missing meal breaks and rest breaks, we would be talking somewhere between $5 and $6 billion,” according to a recording Ain’t I A Woman posted online.

The union’s goal, he said, was “as many dollars as we can squeeze out of the employers in this industry, but keeping all the companies in business to provide jobs.”

That $5-6 billion figure, 1199 explains, is not what people are actually owed for having their breaks interrupted: It represented the total cost if everyone who worked a 24-hour shift over the previous six years was paid for every single hour regardless of whether they got sleep or meal breaks.

The largest home-care agency operating in New York City, New Partners/Partners in Care, had $290.4 million in revenue and 11,900 workers in 2020, according to data from Internal Revenue Service Form 990 compiled by CauseIQ. The Chinese-American Planning Council, the third-largest in the city, took in $201.4 million in 2020. The seven next-largest agencies involved in the arbitration, all ranked in the city’s top 20, had revenues ranging from $12 million to $50 million, with between 1,100 and 2,000 employees.

That “doesn’t change the fact that this is a historically low settlement,” Ain’t I A Woman spokesperson Sarah Ahn told LaborPress. Many of the workers the campaign organizes have said they did three or four shifts a week where they regularly had to get up at night to help their clients. If the $30 million fund were divided equally among the 5,000 to 8,500 workers 1199SEIU estimates do 24-hour shifts, Ahn says, it would work out to less than $4,000 each, using the arbitrator’s formula that 60% of the fund should go directly to the affected workers.

1199 says the amount individual workers receive would be more, because not everyone who did a 24-hour shift had their breaks interrupted, and they would also receive some of the 40% earmarked for overtime and travel-time claims.

Those workers were victims of wage theft, so “they should get full pay for all the years they worked for free,” Ahn says. If the penalty for wage theft is low enough, she adds, bosses can calculate that it’s a cost-effective business decision.

Chinese-American Planning Council CEO Wayne Ho told LaborPress last September that the agency was urging the state to end 24-hour shifts and instead have two workers cover 12 hours each, but that would be impossible without substantially more money from Medicaid, which pays for virtually all home care in the state.

There were 11,000 24-hour live-in cases in New York State, Ho said, and CPC has 54 of them. By those figures, paying all attendants $17 an hour for the now-unpaid 11 hours would cost the state about $750 million a year. If CPC settled back-pay claims on the same $66-a-shift terms as one smaller agency did last year (agreeing to pay workers $12 an hour for 5.5 hours), it would owe about $6.5 million.

Ain’t I A Woman had called the agency hypocritical for continuing 24-hour shifts, saying it used lack of state funds “as an excuse for wage theft.”

“Our goal really is to stop the 24-hour shifts,” Ahn says. “It should have stopped six years ago when these women first spoke out — working through the night and literally breaking their bodies.”

The 1199 spokesperson said the union has backed legislation to limit home-care shifts to 12 hours, but estimates paying for that would need an additional $1 billion a year in Medicaid funding.

State Senator Roxanne Persaud (D-Brooklyn) and Assemblymember Harvey Epstein (D-Manhattan) reintroduced such a bill in January 2021, but both versions were referred to the Labor Committee and have not yet gotten a hearing.