What Noir Films Taught Us About Police

Before copaganda became widely televised in shows like “Law & Order,” police were more accurately portrayed as abusers of power. 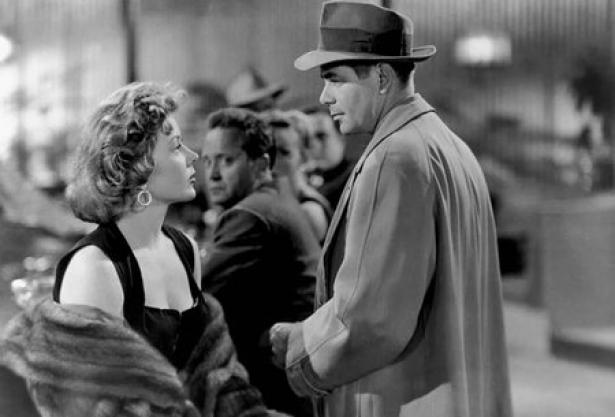 An image from "The Big Heat",

Since it debuted in 1999, every episode of the NBC series Law & Order: Special Victims Unit (SVU) has opened with the same narration:

In the criminal justice system, sexually based offenses are considered especially heinous. In New York City, the dedicated detectives who investigate these vicious felonies are members of an elite squad known as the Special Victims Unit. These are their stories.

These lines, soberly delivered by Steven Zirnkilton, suggest a duality: on one side are the criminals who commit offenses; on the other are the detectives who stop them. But the narration also implies a third party—the ordinary citizens, like you and me, who are endangered by the criminals if the detectives fail.

The portrayal of police in film noir runs contrary to modern copaganda.

Such distinctions are the core of “copaganda,” which includes SVU, its parent show Law & Order (which aired 456 episodes between 1991 and 2019), and its five fellow spin-offs. As the portmanteau suggests, copaganda refers to any piece of media that portrays the police as a necessary social institution. While these can include viral videos of police chatting with neighborhood kids or doing lip-sync battles, the most pervasive forms are pieces of pop culture.

While some pieces of popular culture do show us the real cost of U.S. policing, copaganda remains the norm. And it’s not hard to see why. In the high-stakes world of film and television production, controversy can lose viewers, especially in the reliable market of middle-aged and elderly audiences who tend to watch procedurals. Given the cries police unions have pitched against even the most reasonable criticism, it’s no surprise that the billionaires running studios greenlight pro-police movies and shows.

As author Alex Vitale points out in his book The End of Policing, copaganda teaches us that “police are bringers of justice. They are here to help maintain social order so that no one should be subjected to abuse.”

But that wasn’t always the case. Long before copaganda began its reign on screens big and small, films noir stalked the popular imagination. Noir films (literally, “dark films”) are crime movies about morally ambiguous characters being sucked into a life of crime. Following the lead of German expressionists such as Fritz Lang and F.W. Murnau, directors such as Billy Wilder, Orson Welles, and Jacques Tourneur integrated heavy shadow and contrast into their stories about desperate men and duplicitous women.

Take, for example, 1941’s The Maltese Falcon, universally considered to be among the best noir films. Written and directed by John Huston and based on the novel by Dashiell Hammett, The Maltese Falcon stars Humphrey Bogart as Sam Spade, a private detective hired by femme fatale Ruth Wonderly (Mary Astor) to find the titular avian statue. As the film’s labyrinthine plot unfolds, Spade becomes caught up in the machinations of sneering lacky Joel Cairo (Peter Lorre), nervous trigger man Wilmer Cook (Elisha Cook Jr.), and haughty socialite Kasper Gutman (Sydney Greenstreet), all of whom double-cross and manipulate one another in their search for the falcon.

Although Spade initially seems to get along with the story’s two primary detectives, Lieutenant Dundy (Barton MacLane) and Tom Polhaus (Ward Bond), the relationship quickly reveals itself to be one of convenience. In the next scene, the duo arrives at Spade’s apartment to question him about Archer’s murder and cinematographer Arthur Edeson shoots the pair as twin figures of threat. The two stride into the apartment, their overcoats floating as dark masses.

With each cop framed on either side of Spade, the two begin to question him, Polhaus asking in a friendly tone while Dundy stares on. Spade assents to their searching the apartment, but adds the caveat, “if you got a search warrant.” The cops balk at the suggestion that they follow the law, with Polhaus whining, “You can’t treat us like that, Sam; it ain’t right. We got our work to do.” The scene ends with Mundy insisting upon his decency, explaining to Sam, “if you did it or if you didn’t, you’ll get a square deal from me and most of the breaks.”

Dundy and Polhaus have relatively little screen time in the movie, but their presence is felt throughout. Having decided that Spade killed his partner Archer (Jerome Cowan), a theory that eventually proves false, Dundy pursues and pressures him, never discovering the true murderer. In fact, the cops’ need for a simple explanation allows for the movie’s climactic double-cross.

Telling them that the police will need a fall guy to be charged, thus allowing everyone else to escape unharmed, Spade plays Cook, Cairo, and Gutman against each other. Concepts of justice or safety never enter into the film.

Even in movies with police as the primary characters, such as Welles’s Touch of Evil (1958) and Joseph H. Lewis’s The Big Combo (1955), law enforcement is portrayed as simply a different type of gangster. 1953’s The Big Heat, directed by Lang and starring Glenn Ford as Detective Dave Banion, offers perhaps the most sympathetic depiction of a police officer in a film noir. But even that cannot subscribe to copaganda’s ideas about police stopping crimes.

Written by Sydney Boehm and adapted from the novel by William P. McGivern, The Big Heat follows Banion’s investigation into the apparent suicide of an officer gone rogue. The department determines that the officer killed himself out of guilt over various misdeeds and wants Banion to provide evidence to corroborate this simple interpretation. But after speaking with the officer’s mistress, who also dies under mysterious circumstances, Banion suspects that more is at work.

The film’s central tension comes from Banion’s relationship with two women, his supportive wife Bertha (Jeanette Dolan) and the seductive moll Debby Marsh (Gloria Grahame), girlfriend to the violent mob lieutenant Vince Stone (Lee Marvin). It would be tempting to call The Big Heat a movie about the depravity of the criminal class, a reading reinforced by the movie’s most infamous scene, in which Stone disfigures Marsh by pouring boiling coffee onto her face. But not only is Banion’s department in league with Stone’s boss, the crime lord Mike Lagana (Alexander Scourby), he is no hero. Ford plays him as a man only one step away from joining the bad guys.

The portrayal of police in film noir runs contrary to modern copaganda. Most pop culture about police wants desperately to follow the Law & Order model, which rewrites real-world crimes into narratives with a simple dichotomy between good and evil. As emphasized in the series’ opening voice-over, these shows imagine “the police who investigate crime and the district attorneys who prosecute the offenders” as representatives of the people.

But noir films like The Maltese Falcon and The Big Heat had no use for such fantasies. With their dyspeptic view of humanity, they knew that centralized authoritarian power always leads to abuse and oppression—that cops were just legitimized gangsters.

Where modern copaganda insists that police hold a hard line between decency and depravity, noir teaches us that no such line exists. These movies remind us that police do not protect the people. Rather, they abuse and exploit them.

[Joe George is a pop culture writer whose work has appeared in Polygon, Slate, Den of Geek, and elsewhere. You can follow him on Twitter at @jageorgeii and read more at joewriteswords.com.]