When Boomers Come Together

Our new organization, Third Act, is mobilizing the generation with the most political and economic influence to fight for a working climate and a working democracy. 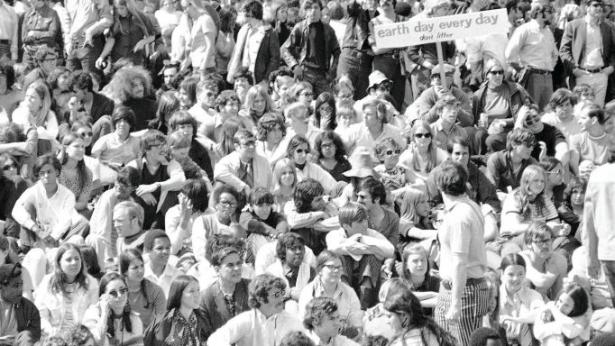 The changes we need to make over the next few years to safeguard our democracy and stabilize the climate are going to be hard. Without the active participation of a good proportion of Americans over the age of sixty—a.k.a. “Boomers”—these changes will be impossible. That’s why we’ve formed Third Act: because we badly need experienced people across as many fields and industries as we can get to join this fight. We’ve got, literally, no time to waste.

Why is it so important that Boomers mobilize? With seventy million of us in the United States alone, we are a population larger than France; and, with about the same number of people in this country turning sixty each day as there are being born, we’re still growing. We vote in a much larger proportion than any other group, meaning that if we want to, we can block any real political change—or bring it about.

Boomers (born 1946–1964) and the Silent Generation (born 1928–1945) also hold about 65 percent of the nation’s financial assets, compared with about 6 percent for millennials. That may or may not be fair, but it’s very real, and it means that if we let our life savings be loaned to those who would build pipelines and frack wells, the temperature is guaranteed to rise.

But we can turn those things around. We possess the political and financial power to make real shifts possible. Washington, D.C., and Wall Street should shake at the prospect that we might actually come together as a generation to demand progressive change.

This isn’t an impossible dream. In fact, our generational DNA is tightly tied to transformative, liberating change. When we were young, we either participated in or bore witness to truly remarkable shifts: the civil rights movement, the women’s movement, the anti-war movement.

Movement is the right word. We were in motion. That motion took us into the streets. On the first Earth Day in 1970, twenty million Americans marched, one in ten out of the country’s then-population, amounting to perhaps the biggest single demonstration in U.S. history.

But, clearly, something changed. While many of us kept up the struggle throughout our lives—the subscription list of The Progressive, I would hazard, is filled with just such people—our generation as a whole did not keep moving. We settled in. If our first act was about liberation, our second act had more to do with consumerism than with citizenship.

We could talk for a long time about the reasons. Perhaps we thought the battles had already been won. With legal segregation abolished and voting rights protected, at least on paper, maybe some of us thought racial division in the United States was on a glide path toward justice.

Washington, D.C., and Wall Street should shake at the prospect that we might actually come together as a generation to demand progressive change.

After that first Earth Day, Congress passed the Clean Air Act and the Clean Water Act. And, indeed, the air above our cities began to clear, and the number of streams where one could safely swim grew steadily. Bald eagles, our national emblem, which were nearly wiped out by DDT, began to rebound, spreading to inhabit every state except Hawaii. With Roe v. Wade, it seemed as if a pregnant person’s right to control their own body was assured. And so on.

These shifts may be why it was easy to persuade so many that the time had come to look after ourselves. It was Ronald Reagan’s election to the presidency in 1980, really, that turned the political corner, and his highly individualistic sense of the world (“government is not the solution to our problem, government is the problem”) fit a little too easily with some of the other currents of the 1960s and 1970s.

But whatever. That’s water under the bridge. The point is that right now it’s clear that everything we hoped for in our early years is under siege. The Voting Rights Act of 1965 is being mocked in 2022 by state legislatures passing laws to make it as hard as possible to vote; smog over our cities seems almost nostalgically simple in a moment when we’re melting ice caps and spawning wildfires that cover the continent with smoke.

Things we took entirely for granted—the basic physical stability of the planet, the basic political stability of our democracy—now wobble; the drama of giant hurricanes is matched by the drama of costumed fascists marching on the U.S. Capitol. We are about to become the first generation to leave the world a much worse place than we found it.

Unless, of course, we can get our act together.

Hence, Third Act. We founded it a few months ago, on the premise that we need a generational voice, one that could collaborate effectively with the young people leading these fights. And it’s been amazing to watch the outpouring of enthusiasm. People have poured in to help—Akaya Windwood, for instance, who led the Rockwood Leadership Institute for many years, or Sam Brown, who once led the 1969 Moratorium protests to end the war in Vietnam. Carole King, Jane Fonda, Norman Lear, Bernie Sanders, Lester Chambers—every day’s email brings new recruits, sometimes five thousand in twenty-four hours. It’s growing very fast.

In part, that’s because people really are focused on their legacy. If twenty-year-olds worry about the climate crisis because it will destroy their lives, those in their eighties worry it will destroy their grandkids. And that it will destroy our sense of our own story, that the world grew better in our time. We’re the people who listened to Jack Kennedy tell us to ask what we could do for our country; how could we have degraded to the raw, selfish cynicism of a figure like Donald Trump in just one lifetime?

But people also sense just how much we—experienced Americans, codgers, people of a certain age—could do to turn the country and the planet around. Think about the fact I gave you earlier: that the Boomers and the Silent Generation control about 65 percent of the country’s financial assets. That’s why Third Act has made its first target in the climate fight the four big banks: Chase, Citibank, Wells Fargo, and Bank of America. Together, they’ve lent almost $1 trillion to the big fossil fuel companies since the 2015 Paris Climate Accords—they’re providing the oxygen on which the fires of global warming are burning.

They just might listen to older people, simply because so much of the money in their vaults belongs to us. Not every older person is financially comfortable, but that just puts the onus on those who are—and they’re stepping up in large numbers to pledge that they will cut up their credit cards from those banks and close their accounts at year’s end if the financiers haven’t changed their ways.

What’s most fun, of course, is the chance to work alongside younger people. In October, a coalition of mainly youth-led climate organizations including the American offshoot of Greta Thunberg’s Fridays for Future movement called for demonstrations outside those banks, and they asked us to join in, knowing that the combination of future customers and present depositors would be most effective.

It was great joy to back them up. I was in Boston that day, getting ready to travel to Glasgow for the COP26 climate conference, and so I got to march through the downtown heart of the city, under a sign that read “Fossils Against Fossil Fuels.”

The point of this work is not to “relive the sixties.” But it is to recapture some of the energy of those years, albeit in new forms suited to this moment, and to our age. A surprising number of our volunteers have said they want to do civil disobedience in the years ahead (or maybe not surprising, since past a certain point what are they going to do to you?), but there are also thousands of people signing up for seminars on writing letters to the editor, op-eds, and Facebook posts. (We call it “how to be an effective crank.”)

Many more are joining what we’re calling our Democracy Force, and learning how to phonebank and text in states across the country where voting rights are on the line.

And they’re doing it to the soundtrack of their generation. (We have, it must be said, produced the best music. By far.) Those cultural icons are, in many cases, still alive and still fighting—our very first national conference call began with some words and music from Lester Chambers, now eighty-one, who helped invent psychedelic soul in the 1960s and is still recording. “I’ve never felt better,” he said. In February, Carole King joined in, declaring “It’s all about legacy” as she promised to cut up her Citi card.

I won’t predict we’ll win—the momentum of global warming, and of the attack on democracy, are very strong; we’re clearly fighting an uphill battle. But no more uphill than the ones this generation has fought before. We’ve come full circle. Our time is now.

[Bill McKibben is an author, activist, and the founder of Third Act. His next book,to be published in May, is The Flag, the Cross, and the Station Wagon: A Graying American Looks Back at his Suburban Boyhood and Wonders What the Hell Happened.

His 1989 book The End of Nature is regarded as the first book for a general audience about climate change, and has appeared in 24 languages. He’s gone on to write 20 books, and his work appears regularly in periodicals from the New Yorker to Rolling Stone. He serves as the Schumann Distinguished Scholar in Environmental Studies at Middlebury College, as a fellow of the American Academy of Arts and Sciences, and he has won the Gandhi Peace Prize as well as honorary degrees from 20 colleges and universities. He was awarded the Right Livelihood Award, sometimes called the alternative Nobel, in the Swedish Parliament. Foreign Policy named him to its inaugural list of the world’s 100 most important global thinkers.

McKibben helped found 350.org, the first global grassroots climate campaign, which has organized protests on every continent, including Antarctica, for climate action.]