Reflections on the ‘People’s Mayor’ on His Centennial Birthday 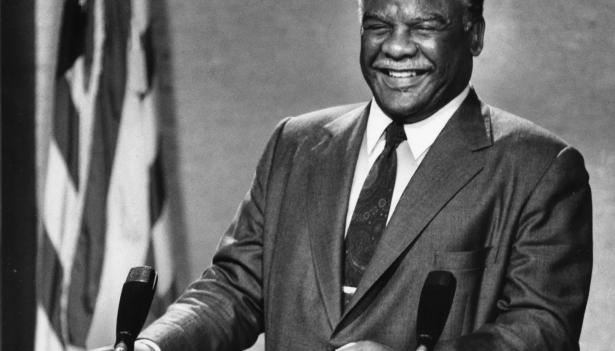 Today would have been Harold Washington’s 100th birthday.

Washington’s legacy as the first Black mayor of Chicago is so huge that it is impossible to ignore.

Many of the people who truly knew Washington have gone on.

But his inspiration, the example he set during the Council Wars and the love he had for this city live on.

After all, Washington’s crusade to make Chicago a more fair and welcoming city for everyone gave former President Barack Obama the audacity to seek the highest elected office in the land.

I wasn’t a journalist or involved in politics when Washington attempted to change “bossism” to “leadership.”

So I’m grateful for the record of the events chronicled in books, such as “Harold: The People’s Mayor,” which was written by the late Dempsey J. Travis.

The forward by the late Richard G. Hatcher, the first Black mayor of Gary, captures the spirit of those turbulent times.

“While the massive turnout in the Black community provided the base of victory, it was Harold’s genius in building the progressive rainbow coalition that created the necessary margin to win the mayoral race from a white Republican opponent. The dirty tricks, the racist maneuverings of the Vrdolyaks and Byrnes, the use of ‘Bye, Bye Blackbird’ by the Bernard Epton campaign just made good people fight harder,” Hatcher wrote.

The weary, the tired, the underdog and the mistreated had finally found their champion, and they were overjoyed.

Ironically, Washington’s campaign and how it was covered was a foreshadowing of what was to come decades later on the national stage.

Frankly, even the most astute political observers under-estimated Washington’s ability to put together a rainbow coalition that would hand him the victory.

So while balloons and flowers may mark this centennial, Washington didn’t always get his proper due.

As a single mother working at some of the city’s most prestigious law firms, I saw the spectacle that unfolded when the white half of the town realized “We want Harold” was more than a slogan — it was a rallying cry from Black, Latino, Asian American and working-poor white residents across the city who had been left behind.

On March 10, 1986, at the then 139-year-old Quinn Chapel African Methodist Episcopal Church, Washington publicly aired his concerns about how the media was covering him while ignoring rampant corruption.

He told supporters the news media would put “five reporters out in front of City Hall to see what time he came to work every day and then lie about it.” And he vowed to end the corruption that was being ignored.

“Corruption is the ability year after year to hire certain groups of people to the exclusion of others, be they women, be they Black, be they Hispanic,” Washington told his cheering audience.

The work he envisioned was far from over.

Washington’s legacy is more significant than his appointments, such as putting the historian, poet and artist Margaret Burroughs on the Chicago Park District Board of Commissioners. However, his choice instantly made the city’s parks and beaches more accessible to all Chicagoans.

It is more significant than his appointment of Fred Rice as the first Black police superintendent to run a force that remains predominantly white.

It is even more significant than the contracts he tried to spread equitably — even to those opposed to the historic election.

His true legacy is that he endured despite the horror.

Washington believed Chicago was better than its reputation as the most segregated city in America, and he wanted the world to know that Chicago.

He will always be remembered as the “people’s mayor” and as the mayor who could unify Black people in this city in a way that we hadn’t seen before and haven’t seen since.

Mary Mitchell is a columnist at the Chicago Sun-Times.