Republicans Are Determined To Stop Teachers From Educating Students

The latest rightwing attack on public schools has been raging for more than a year with angry, screaming parent groups disrupting school board meetings threatening jobs and lives of educators. Those weren’t actually spontaneous grassroots protests. 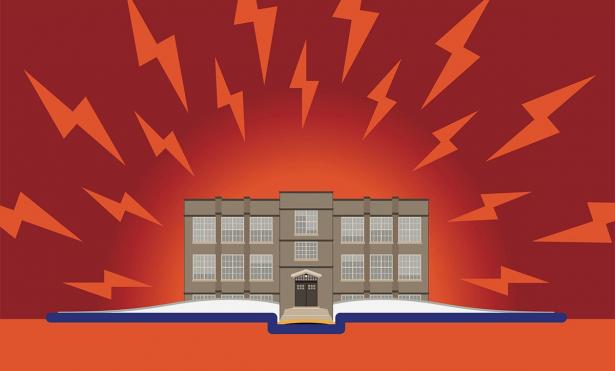 Many school teachers are frightened for their futures these days and they have a right to be. Republican politicians in Wisconsin and more than half our states are threatening teachers with serious consequences if they don’t stop educating students about everything going on in the world.

The latest rightwing attack on public schools has been raging for more than a year with angry, screaming parent groups disrupting school board meetings threatening the jobs and lives of educators. Those weren’t actually spontaneous grassroots protests, but in Wisconsin they were locally funded.

That’s because Milwaukee’s rightwing Bradley Foundation financed hundreds of such groups nationally with names like Moms for Liberty and Fight for Schools. They threatened public schools for requiring masks to protect students and staff and for teaching about racism in America.

In an election year, Republicans are eager to continue pushing their rightwing agenda. Wisconsin Gov. Tony Evers, a professional educator, vetoed their bill to ban teachers from discussing racism and the civil rights movement. The problem with all the Republican laws and executive orders outlawing teaching about racism is they’re so vaguely written nobody has any idea what’s against the law.

In New Hampshire, where Republicans have total control, state law explicitly bars teaching that any age, sex, gender, sexual orientation, race, creed, color, marital status, family status, mental or physical disability, religion or national origin are inherently superior or inferior to any other, but teachers need to know the legal definitions of words like “inherently,” “superior” and “inferior.”

“We asked for clarification from the state, from the union, from school lawyers,” said a high school teacher. “The universal response is no one’s really sure. It’s led us to be exceptionally cautious because we don’t want to risk our livelihoods when we’re not really sure what the rules are.” Which is exactly the intention—to scare teachers into never uttering a word about America’s continuing history of racism.

That’s frightening enough, but Republicans now have a radical new way to destroy the lives of teachers who teach things they don’t want children to know about including racism, U.S. history, science and sexuality. Republicans are introducing copycat laws around the country modeled after the successful gimmick Texas Republicans used to shut down legal abortions. Their unconstitutional law allowed citizen vigilantes to sue anyone aiding an abortion and collect a bounty of $10,000.

A Republican legislator in neighboring Oklahoma has now introduced a bill allowing parents to personally sue teachers for $10,000 each time they say something in class contradicting a student’s religious beliefs. That could include any reference to sexual orientation, evolution or the world being created by a big bang in our universe instead of a nice old man living somewhere in the sky.

Book Banning is Back

The same legislator introduced a companion bill allowing parents to sue a school district if it declines to ban a book they want removed from the school library to prevent students from reading it. If a court sides with the parents, they could collect $10,000 a day for each day the book remains on the shelf.

Book burning is back. The driving force lighting the bonfires for books this time among Republicans was the election of Republican Gov. Glenn Youngkin in Virginia, a Democratic state in recent years, attributed to his advocacy for parents controlling schools. One of his constant TV commercials called for banning Nobel-prize-winning African American writer Toni Morrison’s Beloved from schools after a Republican mother claimed it gave her high school son nightmares with its description of the horrors of slavery.

Rightwing parent groups have now compiled lists of hundreds of books they want removed from school libraries. They include books about racial and social issues as well as sexuality. There is not a single school district in America that includes any pornography in its school libraries. But many parents have opposed sex education in schools for decades in hopes of preventing their children from ever learning about sex. No one ever succeeded, even before the internet. But the job of responsible teachers has always been to provide students with accurate information.

There’s also nothing unusual about young people having more politically progressive ideas than their parents. It’s a natural, healthy process for teenagers to pull away from their parents and begin forming their own opinions. That’s happening in spades these days when they’re living through some of the most hostile political divisions in America since the 1960s.

Many young people today are appalled by the political inaction to protect their planet from global warming, keep deadly weapons out of their schools and end hatred based on race, gender and sexual orientation.

That’s not because teachers are doing anything wrong. It’s because they’re educating our children about their world. The rest of us have to do everything we can to prevent partisan politicians from destroying their education.

[Joel McNally is a national-award-winning newspaper columnist and a longtime political commentator on Milwaukee radio and television. Since 1997, Joel has written a column for the Shepherd Express where he also was editor for two years.]