Judith Berlowitz’s historical novel offers readers a peek into the Spanish Civil War and the idealism that brought people from across the globe together to fight for democratic governance and human rights. 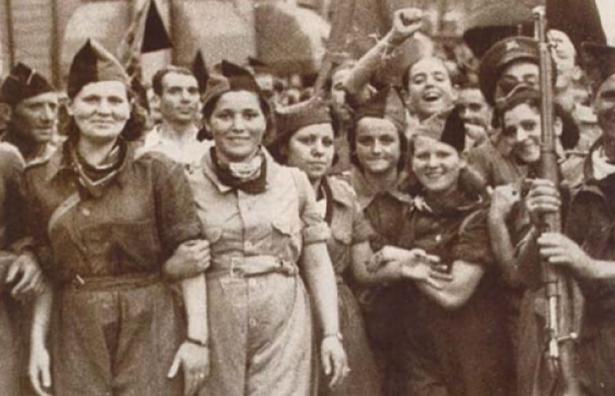 Militia women during the Spanish Social Revolution of 1936.,

When amateur genealogist Judith Berlowitz learned that she had a relative who’d fought  against fascism during the Spanish Civil War, she knew she wanted to learn as much as she could about her. The result is a meticulously researched historical novel that introduces readers to Klara Philipsborn.

A nurse by training, German-born Klara began working as a lab assistant at the Medical College of Madrid in 1936. She also joined the Communist Party and when war broke out, she quickly signed up as a volunteer with the Communist-led Fifth Regiment of People’s Militias.  There, her medical training and facility with languages – she not only spoke German and Spanish, but was near-fluent in English, French, Italian, and Romanian – led to frequent assignments as a translator of documents and an interpersonal interpreter. She loved everything about both roles. Nonetheless, Klara tells no one that she is Jewish, keeping her background a secret. For the most part, this omission does not faze her; after all, neither she nor her family were particularly religious and a favorite uncle now lived as a Catholic and was fully accepted by the family. At the same time, when she meets other Jewish volunteers, she gravitates toward them, finding an almost-instantaneous connection, an ease of association that she had not known she needed.

But Home So Far Away is about far more than finding one’s cultural grounding. In addition, it exposes the sexism of the era, and the ways that politically progressive women pushed back against boundaries and restrictions; chronicles the divisions that existed between socialist, anarchist, and communist anti-fascists who came to Spain from around the world; and serves as a dramatic testament to the often-fleeting personal connections that formed between hospital workers as they moved from emergency to emergency.

What’s more, the brutality of the Spanish fascists  – whose military campaigns began ramping up ahead of similar campaigns in Germany, Austria, and Poland – adds nuance to the story. Similarly, Berlowitz’s focus on the different ways people in the Philipsborn family dealt with Hitler’s ascension gives readers a glimpse into the day-to-day reality of the period. For example, Klara’s Berlin-based industrialist dad refuses to believe he is in danger and continues to run his business, seemingly oblivious to overt – and rising — antisemitism. Meanwhile, Klara’s sister flees to Palestine and her brother and his family head to Denmark before emigrating to the United States.

Berlowitz captures the confusion and terror of the times extremely well and while the story is obviously grim, the sweeping narrative is periodically sweetened with dollops of romance and includes several explicit sex scenes. Suffice it to say that hook-ups are not solely a contemporary phenomenon!

In fact, Klara’s belief in love and her optimism, humanism, feminism, and general chutzpah make her an easy-to-root-for protagonist. And while the narrative periodically gets bogged down in minutiae about rifts between socialists, communists, and anarchists, divisions that seem both frustrating and pathetic 85 years later, this is a small criticism in an otherwise fascinating and absorbing book.

Indeed, Home So Far Away, written as diary entries covering 13 years, 1925 to 1938, gives readers a peek into the Spanish Civil War and the idealism that brought people from across the globe together to fight for democratic governance and human rights. Berlowitz is clearly awed by their commitment and the commitment of her cousin Klara, a woman she never met.

Her evocation of Klara, however, is far from hagiographic. On one hand, Klara is presented as creative, feisty, bold, and open to adventure. On the other, she is overly trusting and is easily manipulated by charismatic male leaders. These factors make Klara wholly real and wholly recognizable.

Illustrations – photos of the real Klara Philipsborn and her extended family, reprints of news clippings, and graphics created by leftist factions during the war – give Home So Far Away added heft and provide an astute and moving look at the anti-fascist resistance that preceded World War II. All told, it’s an inspiring, insightful, and evocative read.