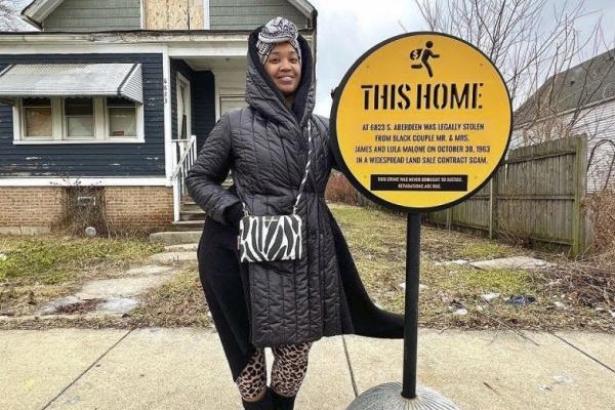 Chicago artist and activist Tonika Lewis Johnson with a sign installed to mark a house lost to a Black couple after a predatory contract sale.,

In Chicago, there’s a lot of talk about crime that happens on the city’s South and West sides. There’s less talk about crime that happened to the South and West sides. One such injustice is the predatory practice of land sale contracts, common in Chicago’s Black communities in the 1950s and ’60s. A contemporary Chicago artist is shining a spotlight on this acutely detrimental form of housing predation, the effects of which linger today.

But first, let’s look backward. The little-known history of land sale contracts—also called contracts for deed, home installment contracts or home contract sales—stretches back to the postwar period. After World War II, a housing boom spread across America and with it came the creation of a vast middle class. Many white Americans—aided by low down payment, low-interest home loans guaranteed by the Federal Housing Administration, along with benefits from the 1944 GI Bill—were able to buy property and reap the economic benefits of home ownership which resulted in generational wealth. The number of families that owned their homes climbed from 44% in 1934 to 63% in 1972.

Meanwhile, Black Americans were largely excluded from homebuying due to discriminatory practices like redlining, which were federal government-endorsed policies in which banks withheld loans from prospective buyers in Black or mixed-race neighborhoods. Then along came land sale contracts, a purported pathway to homeownership for African Americans with few other options.

Contract sellers bought houses, often from white families attempting to flee racially changing neighborhoods, then marked up the prices of the homes and sold them to Black buyers on contract. The buyers would pull together hefty down payments, followed by monthly payments at higher-than-average interest rates. Contract buyers also were responsible for covering the cost of all home maintenance. Despite making payments, buyers did not build equity in their homes—and importantly, contract sellers kept the titles until the last contract payment was made. If a buyer missed even one payment, the seller could evict them and the buyer lost the money they invested in the home, without recourse to recover it.

Making the case for reparations in a 2014 article in The Atlantic, author and journalist Ta-Nehisi Coates described contract buying as “a predatory agreement that combined all the responsibilities of homeownership with all the disadvantages of renting—while offering the benefits of neither.” Indeed, scores of contract buyers got an exceptionally raw deal and were ultimately left with nothing to show for it.

A 2019 study from Duke University explored the quantitative impact of land sale contracts on Black homebuyers in Chicago in the 1950s and ’60s. The findings of the study were grim. Contract sellers marked up home prices by 84%, on average. A speculator would buy a home for $12,000, and days or weeks later, sell it to a Black homebuyer on contract for $22,000. Compared with what they would have paid if they had bought the home at a fair price with a conventional mortgage, Black contract buyers spent an average of $587 more (in April 2019 dollars) each month.

Between 75% and 90% of homes sold to Chicago’s Black families in the ’50s and ’60s were on contract, and the amount of expropriated Black wealth is staggering: between $3.2 billion and $4 billion were stolen in the two decades studied, according to Duke University estimates. Due to holes in surviving data—there were no requirements that land sale contracts be publicly recorded—researchers say those estimates are conservative.

“What happened during this crucial era, that of the making of America’s mass white middle class during the long postwar economic boom, was a systematic, legally sanctioned plunder of black wealth,” the Duke researchers wrote.

The billions in taken funds directly contributed to America’s racial wealth gap. Rather than earning equity and passing down assets to future generations, Black contract buyers often lost their homes and savings and landed in debt; meanwhile, their money lined the pockets of contract sellers. As Rutgers University historian Beryl Satter wrote in “Family Properties: How the Struggle Over Race and Real Estate Transformed Chicago and Urban America,” a book about the land sale contract system, “While contract sellers became millionaires, their harsh terms and inflated prices destroyed whole communities.”

It’s important to note that speculators gained access to the necessary capital to buy and then resell homes on contract from investor groups including Chicago doctors, dentists, lawyers and politicians, the Duke study found. In other words, the well-off got wealthier at Black buyers’ expense. Land sale contracts came to an end in the late ’60s with the 1968 Fair Housing Act, which prohibited discrimination in the sale, rental and financing of housing based on race, religion, nationality or sex.

Through a public art project titled “Inequity For Sale,” sponsored by the National Public Housing Museum and its Artist as Instigator residency program, artist Tonika Lewis Johnson illuminated the history of this theft, showing  that abandoned homes, vacant lots and population loss present in some Chicago neighborhoods today are directly tied to land sale contracts, redlining and other forms of discrimination. The museum’s program is designed to shine a light on historic and social justice issues using artful intervention to illustrate history that otherwise might have remained unnoticed.

Lewis Johnson erected five-foot-high, black-and-yellow concrete and metal land markers in front of two land sale contract homes in Englewood, a neighborhood on Chicago’s South Side, one at 6823 S. Aberdeen St. and the other at 7250 S. Green St. Passersby can’t help but notice the bright yellow circular signs. In capital letters, the marker on Green Street reads: This home at 7250 S. Green was legally stolen from Black resident John Garner on December 28, 1962 in a widespread land sale contract scam. This crime was never brought to justice. Reparations are due.

The back of the land marker explains the concept of land sale contracts, including their ruthlessness and present-day effects. The exhibit launched in February 2022, during Black History Month, in collaboration with the National Public Housing Museum, which named Lewis Johnson its 2021 Artist as Instigator.

The Duke University study documented more than 100 homes in Englewood sold using land sale contracts, many of which are still standing.

“Many of these once-beautiful homes are now dilapidated or abandoned, visible proof of the sordid legacy of land sale contracts,” said Lewis Johnson, who also co-hosts a three-part podcast series supported by the National Public Housing Museum based on the project. “Having people walk through Englewood and see these properties allows them to interact with the destructive nature of Chicago’s history of redlining and segregation.”

Pushback on the new exhibit has already arrived—as it so often does when ugly history is publicly aired. The owner of the Aberdeen Street property, who doesn’t live in the city, removed the land marker. The home is vacant, with boarded-up windows, but the owner said he plans to renovate it in the future.

Lewis Johnson plans to campaign for a collection of land sale contract homes to become an official city landmark. She also hopes to purchase one of the stolen homes and transform it into a community art center. Moreover, she intends to place a land marker in front of a present-day business, such as a bank, that directly profited from land sale contracts.

“My goal with this project is to map the evidence of historic legalized theft in Greater Englewood,” Lewis Johnson said, “and engage the public in action-oriented conversations that ultimately bring this unresolved crime to justice.”

Tiff Beatty is the program director of arts, culture and public policy at the National Public Housing Museum in Chicago.

History News Network depends on the generosity of its community of readers. If you enjoy HNN and value our work to put the news in historical perspective, please consider making a donation today!