labor Starbucks Workers Have the Company on Its Back Foot

With unionization taking off at Starbucks, the company is quietly admitting that it’s in a bind: unionization threatens its low-wage model, but union busting hurts its public image as a supposedly progressive company.

May 8, 2022 David Sirota Jacobin
Printer friendly
Starbucks Workers Have the Company on Its Back Foot Published May 8, 2022 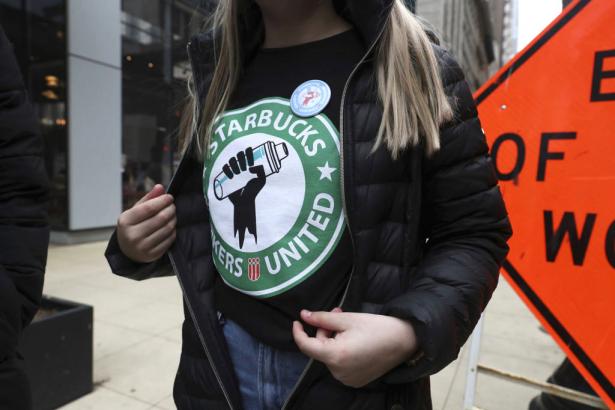 As Starbucks tries to crush a growing union drive among its workers, the company’s executives quietly admitted to investors that their anti-labor activities may destroy the coffee giant’s public image.

In the fine print of the company’s recent government filings, Starbucks first admits that “our wages and benefits programs may be insufficient,” but then slams unions, saying if labor organizing is successful “our labor costs could increase and our business could be negatively affected.”

Then the company made a stunning admission: “Our responses to any union organizing efforts could negatively impact how our brand is perceived and have adverse effects on our business, including on our financial results.”

Starbucks’ billionaire CEO, Howard Schultz, has been spearheading a public crusade to stop unionization — but so far more than fifty Starbucks stores have voted to unionize, and over a hundred more have votes scheduled.

Just yesterday, Schultz announced that Starbucks would be raising wages at its stores — except at those stores which have unionized or have scheduled union votes. Labor law experts told The New York Times that withholding raises only from unionized workers, or workers in the process of unionizing, is likely illegal.