Based on current filings alone, the Starbucks Union is already on track to have 6,400 workers at 230 stores. 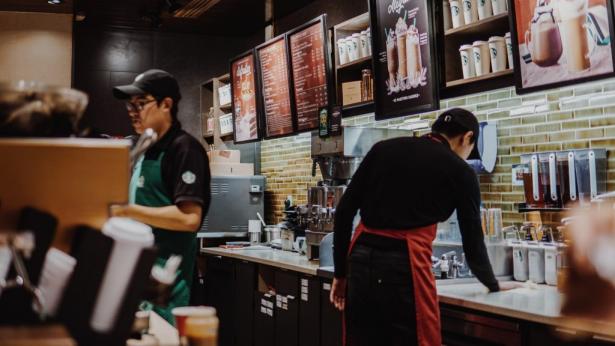 Starbucks Workers United (SEIU) began rapidly unionizing the Starbucks workforce late last year. In this post, I use case data from the NLRB website to provide some up-to-date statistics about the effort.

The first election filing in this campaign came in August of last year. In the next few months, a few more representation petitions were filed with the NLRB, but not very many. By the end of 2021, the Starbucks union had only filed for 14 elections.

It was in January of this year that the union activity rapidly increased. Between January 1 and May 10, the union filed 251 representation petitions, nearly 2 per day. 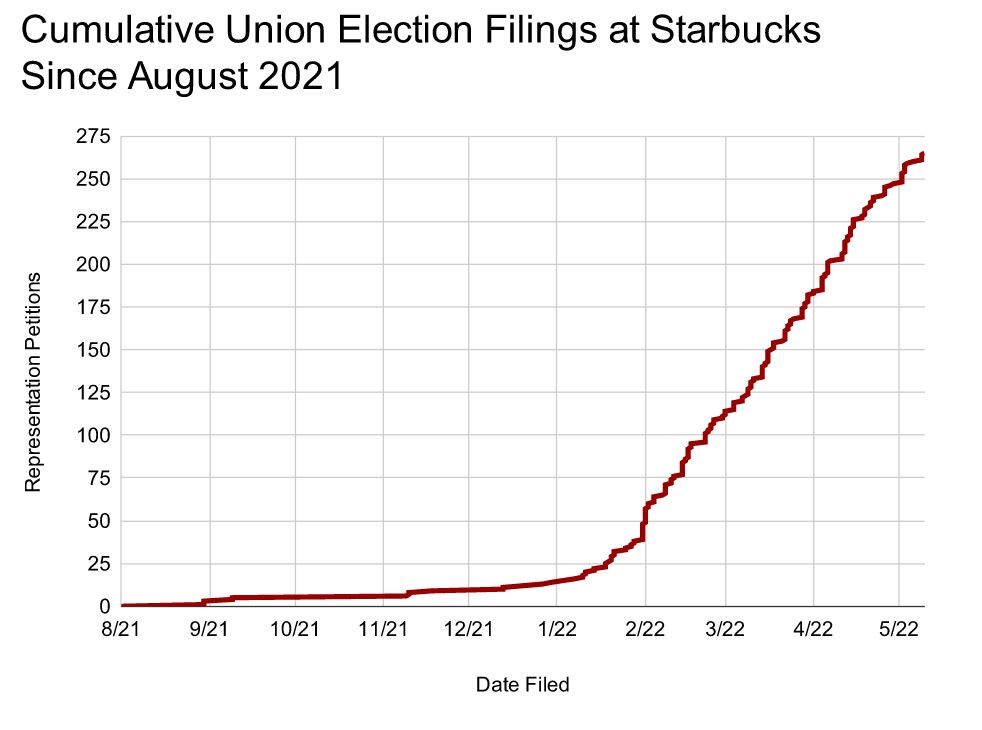 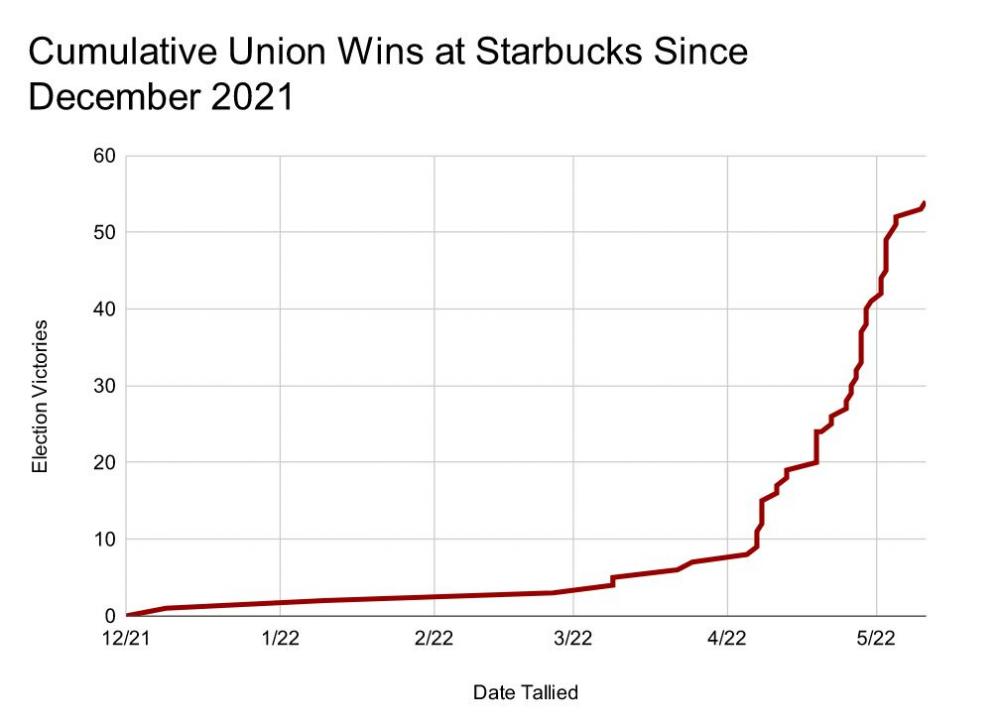 In the elections that have been conducted, the union has consistently won 70 to 80 percent of the votes cast. 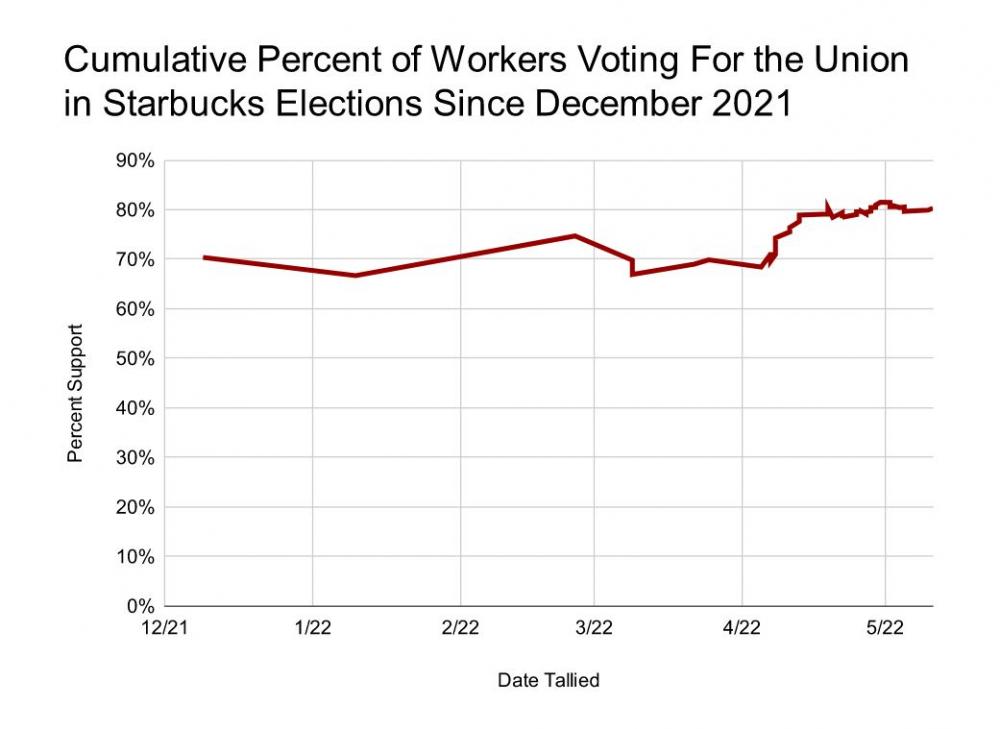 There are 1,514 workers now represented at the 54 stores that have voted for the Starbucks union. 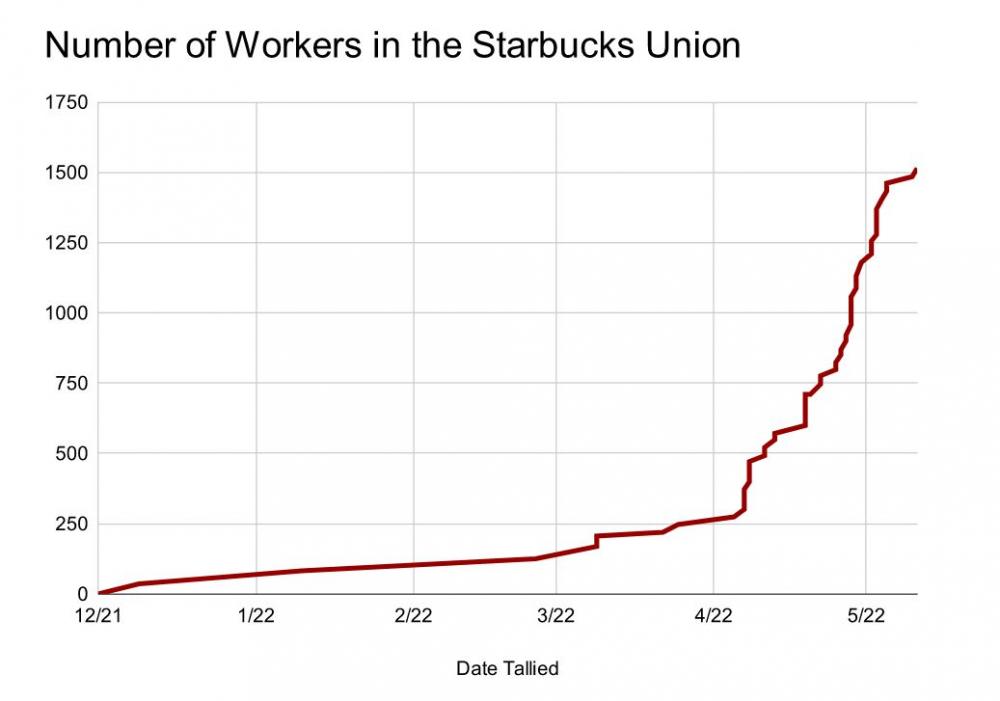 Projecting the Current Size of the Union

In the 60 elections that have been run so far, the union has won 90 percent of the time and the average unit size of the unionized stores is 28 workers. If these same numbers hold for the 193 open cases where an election has not yet been administered, then the Starbucks union will soon win an additional 174 elections and thereby add an additional 4,870 workers to their rolls.

Combining the numbers from the elections that have been run and these projections for the elections that will be run soon reveals that, based on current filings alone, the Starbucks union is likely to have 6,384 workers at 228 locations in the next few months.

If the union continues filing for 2 elections per day, those numbers will of course continue to grow.

[People’s Policy Project (3P) is a think tank founded in 2017. The primary mission of 3P is to publish ideas and analysis that assist in the development of an economic system that serves the many, not the few.

Unlike most think tanks, which are financed by large corporations and foundations, 3P is funded by small donors pledging $5 to $15 per month on the Patreon and ActBlue platforms. This unique funding source enables us to publish policy insights untainted by the compromises typically demanded by monied interests. We are, as the name suggests, the People’s Policy Project, not Walmart’s Policy Project and not the Gates Foundation’s Policy Project.

The work of 3P aims to fill the holes left by the current think tank landscape with a special focus on socialist and social democratic economic ideas. We produce detailed reports, short posts, and explanatory videos to promote our own policy proposals while also working with sympathetic legislators and media publications to provide data and analysis for other stories and initiatives.

Matt Bruenig is currently the president of 3P. Bruenig previously worked as a lawyer at the National Labor Relations Board and as a policy analyst at the Demos Think Tank. His prior work primarily focused on inequality, poverty, and welfare systems.]