DSA’s six-year growth spurt has fundamentally changed the organization. To resolve the deep issues it faces, it needs to meet the organizational challenges this change poses. 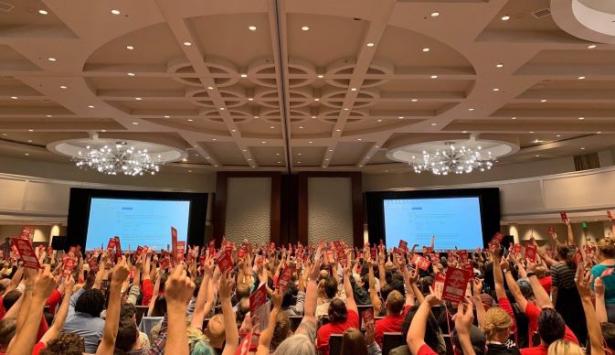 Max Elbaum’s article on the conflict in DSA was very insightful, and useful in highlighting the key issues that the organization faces today. It also outlines some of the issues standing in DSA’s way of solving those problems. For me, it also suggested questions that those of us who mainly agree with Max’s arguments need to address.

First, running through the article are a number of assumptions about DSA as an organization that need to be scrutinized. In some ways Max suggests that DSA is a cadre organization. While it does have cadre, I would venture to say that 90% of the members do not fit in that category. What does that mean? In one of the first paragraphs, Max says, “A significant number of members raised the demand that DSA should go beyond airing criticisms of Bowman’s actions,” but what does this mean? A significant number of members in an organization of 90,000 to me would be at the very least 1,000, but the demand was probably supported by under 200. Maybe that is a significant fraction of the cadre, but even then, how much it represents the views of the cadre let alone the membership is questionable.

We really don’t know what most of the membership thinks about most issues. We can assume that the members see themselves as democratic socialists and we can assume that they’re interested in politics and in changing how politics works. Beyond that we might make some educated guesses—they’re likely to be pro-Medicare for All (or some variation on that), for stronger support for public education, for better regulation of business. But we don’t know any more than that. For example, a while ago I was talking with a member from the West Coast who didn’t understand why DSA should support statehood for the District of Columbia, and I wouldn’t be surprised if he was not alone in his view. I also wouldn’t be surprised if many in the membership don’t support BDS or even know what it stands for.

Reaching beyond the core

The huge upsurge in membership in the last six years hasn’t simply meant that we now have more money, more visibility, or a crisis in leadership: it also means we’ve seen a fundamental change in the nature of the organization. How has this growth changed DSA? In the three decades after DSA was founded, the organization’s membership hovered around 5,000–10,000 members. The increase to 90,000 or 100,000 happened in about a five-year period starting in 2016.

That surge meant that staffing had to increase quickly, the budget for the organization grew dramatically, and the number of new, young activists increased more than 10 times. But the real impact was the dramatic growth of “paper members”—members who support the basic idea of democratic socialism, but who aren’t ready or able to be active members. While DSA has developed some infrastructure to support the activist members, there is much less connection with the thousands of other members. DSA also has limited resources to support leadership development among the new young leaders. These folks have been thrust into national leadership positions with little political education or strategic direction. This is not a criticism of the staff or leadership, but rather a critical organizational question that we have to grapple with in order to really address the organization’s needs.

Max also says in the first few paragraphs, “Bowman did not claim to be representing DSA…But he is a high-profile figure and it was both warranted and inevitable that his actions would attract substantial criticism from other members.” Later he says, “These activists now [felt that] DSA should only endorse socialists who promised to prioritize accountability to DSA itself over accountability to the broader progressive coalition that had to be forged for any campaign to be successful.”

These comments leave out one very important group that Bowman is ultimately accountable to: his constituents. Unless we acknowledge that, we have an incomplete understanding of electoral politics and the pulls on politicians. For AOC, Bowman and others to continue to speak out as socialists, we need to back them up, not unquestioningly, but by building resources that they can use to set policy. This also raises an important question about who we think we can recruit to our cause.

If we look at the American political spectrum, DSA is on the far left. The main groups to our left are the sectarians. If we have any hope of achieving even a small fraction of our goals, we are going to have to convince a lot of people to our right and evicting Bowman from DSA for taking a position that many in DSA hold or at least have questions about would do just the opposite. Max lays this out well: “…alliances with a wide range of other progressive groups were both necessary and possible. And many non-socialist progressives ran for office on programs that were all but indistinguishable from those advanced by socialist DSA members.” How we back them up, provide them with support on policy issues, maintain open lines of communication—all that needs further discussion.

Max’s characterization of the differences between today’s Left and that of the 1970s and ‘80s also deserves attention. He writes, “My generation is no stranger nasty and destructive internal Left debate. The sectarian wars we conducted during the 1970s and ’80s were counter-productive to say the least. But it was political sectarianism: we lost any sense of proportion, exaggerated small differences, and gave our opponents’ views every negative label in the book. But for the most part, we considered our opponents carriers of bad—even counter-revolutionary—lines, not bad people.” Here I disagree—my experience of the destructiveness of debates on the Left is that it was more than equivalent to today’s cancel culture. It was personal and highly damaging.

I was in the Chicago Women’s Liberation Union. Over the course of its history, every left group in the alphabet soup of groups that then existed tried to tell us how we should work for women’s liberation, what was the “correct line” that we needed to take on socialist feminism and gay liberation. Some of us were threatened in our own homes or neighborhoods. But the problem was not simply personal antipathy. Rather it was the destructive way in which these groups interacted with CWLU and other similar organizations.

In 1975 a conference of socialist feminists was held in Yellow Springs, OH. Initiated by the New American Movement and organized by representatives of the ten or so socialist feminist organizations in the U.S., the conference brought together more than 1,000 socialist feminists, making it one of the largest (if not the largest) socialist conferences in the mid-20th century. Two years later almost all those women’s groups were gone, largely due to the dispiriting and crushing influence of the left sectarian groups. Am I bitter about that—what do you think? I’m not alone. Unfortunately, I see many of the same things happening today and I don’t think we do ourselves or others any favors by downplaying the dangers represented by these groups. Social media simply makes it much easier to be nasty and destructive at a distance.

Finally, I think one particularly important question must be addressed: What do we do now? How do we spark a real debate on DSA’s National Political Committee, how do we reach outside our own circles (like North Star), and, if we do figure out a way to go beyond this group of people, what do we do then?

So, I’ve got three questions that I think we need to answer:

For several years a few of us have been proposing a meeting of socialist elected officials. This could have a follow-up goal of developing a policy shop that could provide legislators at all levels with ideas and models for legislation, à la ALEC, or perhaps more appropriately, the State Innovation Exchange (SIX). I think it might also provide an opportunity to connect with legislators who don’t describe themselves as socialists, but who share many of the same goals and values.

If I’m correct that a high proportion of members are at-large and don’t participate in the daily activities of chapters, then a second thing that would be useful would be restoring the budget of Democratic Left, DSA’s outreach publication. Some may scoff at the idea of spending on print when so much of social media is free, but for the members in Appleton, Wisconsin or Mankato, Minnesota, getting something delivered to their mailbox on a regular basis could create a closer tie to the organization.

Perhaps most important is the question of how those of us reading this can reach beyond our own ranks. From what I’ve seen Max’s article has reached a largely older group of activists, many of whom got their start in the activism of the ‘60s and ‘70s. While there are likely some younger people who have read it, simply having a discussion among mainly “old-timers” is not going to change anything. If we agree with the ideas in the article overall, we need to determine how to engage in a discussion with the leadership of DSA. I’ve proposed a DSA webinar on socialism across the generations as a way to start the dialogue. I think that, if planned and publicized properly, that could be a starting point for a larger organization-wide discussion—perhaps even the beginning of some political education that goes beyond organizing training and moves us in the direction of thinking strategically.

[Christine R. Riddiough was a leader in the Chicago Women’s Liberation Union in the 1970s and founder of in Blazing Star lesbian group and newspaper. She was chair of the Gay and Lesbian Coalition of Metropolitan Chicago and the Illinois Gay and Lesbian Task Force. She later served as director of lesbian rights for the National Organization for Women, and executive director of the Gay and Lesbian Democrats of America. Publications and presentations include: - Publishing Feminisms: A Case Study on Organizational Publications, presentation with Margaret Schmid at Publishing Feminisms Conference, Banff, Canada, May 2015. - The Feminine Mystique at 50: Activists Panel, presentation at Newberry Library, published in Frontiers, Vol. 36, No. 2, 2015. - Strategy and Action in the Chicago Women's Liberation Union: The Example of the Lesbian Group, presentation at the A Revolutionary Moment: Women’s Liberation in the Late 1960s and Early 1970s, Boston, MA, March 2014. - Thinking About Gender, and other posts at http://www.dsausa.org/. - Culture and Politics, in Working Papers on Gay and Lesbian Liberation, New American Movement, 1979. - Lesbianism and Socialist Feminism, position paper of the CWLU, 1972. She has a bachelor's degree in astronomy from Carleton College, and a master's degree and Ph.D. candidacy in astrophysics from Northwestern University. She currently teaches computer programming and statistics and lives in Washington DC.]