books I Just Read His Name Is George Floyd

George Floyd was committed to being a person that mattered. But he was also Black, so he could never catch a break. As he got older the police were always at the ready. The day Chauvin murdered him was not the first time he had met Chauvin. 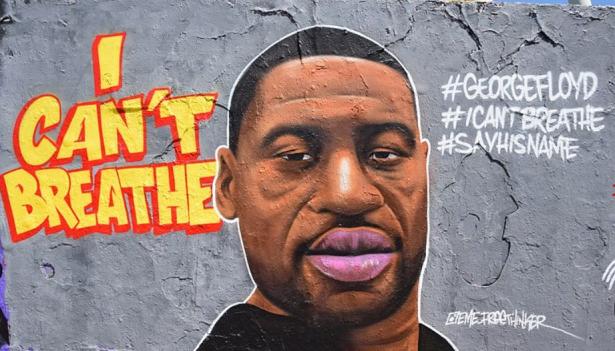 Mural portrait of George Floyd by Eme Street Art in Mauerpark (Berlin, Germany). The mural was completed on May 29, 2020., Singlespeedfahrer

His name is George Perry Floyd.

His friends call/ed him Perry.

The world calls him George Floyd.

His Name Is George Floyd: One Man's Life and the Struggle for Racial Justice

By Robert Samuels and Toluse Olorunnipa

When he was young, he was kind, present, caring, thoughtfully intelligent, and told his friends he wanted to be somebody, to make a difference. “’Sis, “I don’t want to rule the world; I don’t want to run the world. I just want to touch the world.” (p. 10) He thought maybe he could be a Supreme Court Justice

He grew up in the Cuney Homes housing project in the third ward, in Houston, Texas. The third ward was poor working class. His early life was defined by Reaganomics. George lived most of his life in Texas. Texas has the most mean-spirited laws of any state. No Medicaid assistance.

And Texas laws forbid “former felons” from holding many jobs,

or receiving food assistance like food stamps. (p. 159) Texas insured recidivism. Maybe if he lived in a different state his life would have been different. Maybe.

His arrest record shows over twenty incidents. His first conviction was 1997; he did not get his diploma in 1993 — and maybe that was the beginning of his downturn. As he cycled through the prison system about 1/3 of Black men were part of jail, parole or probation in Texas. (p.105) The penal system is burgeoning alongside his personal life.

People’s stories matter. They tell the particulars of a human being. Structures define us but we are always more than that part of the story.

Which comes first? The person or the structure of racism and/or misogyny and/or class privilege that they are born into? There is no first because the embeddedness of who we are is inseparable from what we might become and that does not negate the fact that there can be huge variety. There are usually constraints, and a little bit of choice, but not always, and often not.

Each of us is a person, and each of us is in a structural system of power beyond our own individual story. The authors of Geroge Floyd, Robert Samuels and Toluse Olorunnipa, show us that he was “suffocated” by a system in which he could not breathe.

Floyd’s great-great-grandfather was enslaved — Hillery Thomas Stewart — yet amassed wealth and land only to have it stolen through fraud and deception like so many other Black farmers during the early 19th century. Perry died for allegedly using a counterfeit 20-dollar bill.

As a black boy he was always big — ending up at 6’6” — and 225 pounds. His body was a problem especially because he was Black. And his Black body defined his choices. The only work he could get was: manual labor, bodyguard, security. (p. 210) He tried to get jobs and hold onto them but then came Covid and he could find nothing.

He was surrounded in his childhood and beyond by his mother, grandmother, 9 aunts, and two sisters. His last words, the day he was brutally killed was — “Moma I love you”.

George Floyd was committed to being a person that mattered. But he was also Black, so he could never catch a break. As he got older the police were always at the ready. The day Chauvin murdered him was not the first time he had met Chauvin. Rumors said that Chauvin had a beef with Floyd; Floyd’s drug counselor said he had complained about Chauvin for years. (p.298) From 2014–2020 Chauvin had complaints for using neck restraints repeatedly but was never punished. Eight of the people he assaulted survived, the ninth was George Floyd. He did not. (p. 153)

His back pain from football injuries led to opiods and getting hooked on Percocet. His addiction was always in play — he fought it and won and succumbed over and over, like so many.

Drug record. Arrest record. Addiction. In one of his recovery groups the facilitator would have all the men say: “I am loveable! I am important! I am valuable! I am empowered! If only. He said often: “I know these cops just waiting to kill a big Black nigga like me”.

He was claustrophobic so he always had problems in small spaces — police cars, jail cells.

So many Black people on his death day said: he could have been my brother, my father, my son. To know that is to be really close to the pain. And then there were already Trayvon Martin, Eric Garner, Michael Brown, and Tamir Rice.

George Floyd’s murder took eight minutes and 46 seconds; then that was reconstructed as nine minutes and 29 seconds. I would say it has been centuries. The whole world has watched his death. It is so important to know a bit of his life so we know more what was lost and what must be found in order to finally abolish racist misogyny. This book brings us all closer to the pain and closer to a damning condemnation of the murderousness of structural racoism.

And, I now want a book that tells the intimate and political story of Sandra Bland and another for Bryonna Taylor. Each were determined and directed in their interesting lives. They died and were killed because of egregious racist misogynistic policing. Tell these stories so that we, especially white people, will no longer need them told. Read, and listen and hear what is being told and begin the abolitionist work needed to free us all.

Thank you for this book.

[Zillah Eisenstein has been Professor of Politics at Ithaca College in New York for the las 35 years and is presently a Distinguished Scholar in Residence. She at present writes regularly for Al Jazeera.com and FeministWire.com.  Throughout her career her books have tracked the rise of neoliberalism both within the U.S. and across the globe. She has documented the demise of liberal democracy and scrutinized the growth of imperial and militarist globalization. She has also critically written about the attack on affirmative action in the U.S., the masculinist bias of law, the crisis of breast cancer and AIDS, the racism of patriarchy and the patriarchal structuring of race, the new nationalisms, corporatist multiculturalism, and the newest gendered and classed formations of the planet.

She writes about her work building coalitions across women’s differences: the black/white divide in the U.S.; the struggles of Serb and Muslim women in the war in Bosnia; the needs of women health workers in Cuba; the commitments of environmentalists in Ghana; the relationship between socialists and feminists in union organizing; the struggles against extremist fundamentalisms in Egypt and Afghanistan; the needs of women workers in India, the work conditions of young women in the Foxconn factories in China, and the organizing of migrant women workers in Indonesia.]