When the House committee investigating January 6 changed its schedule to hold an immediate hearing on Tuesday, it was clear something big was up. The view of January 6 from the heart of the White House — from the belly of the beast — was made clear. 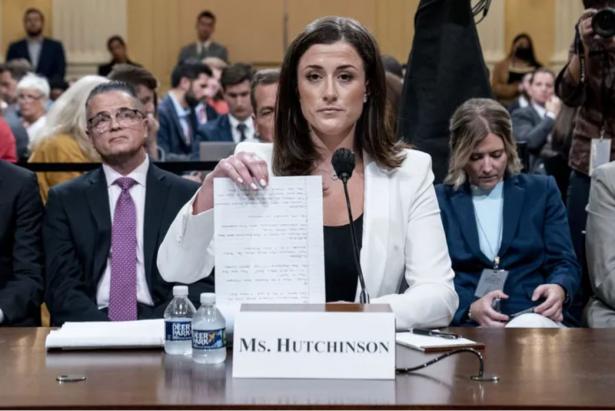 The sole witness for this snap hearing, Cassidy Hutchinson, former assistant to White House chief of staff Mark Meadows during the insurrection, did not disappoint. For the first time, the view of January 6 from the heart of the White House — from the belly of the beast, so to speak — was made clear.

Hutchinson testified that, in advance of January 6, Donald Trump and his staff had already planned to send the assembled crowd to the Capitol and that on the morning of the insurrection, the president knew the mob was armed. She testified that Trump was furious when the Secret Service tried to keep armed protesters from attending the rally by sending them through metal detectors, because “they aren’t here to hurt me.” She further testified that Trump fully intended to accompany the rioters to the Capitol and, after he boarded the presidential limo to head there, he tried to grab the steering wheel of the Chevy Suburban he was in and stop it from going to the White House — even attempting to grab his chief of security by the neck. She testified that Trump repeatedly dragged his feet before half-heartedly calling off the rioters while approving of their deadly threats toward his vice president, Mike Pence.

My first slack-jawed reaction to Hutchinson’s testimony was to wonder if Trump would have been able to avoid Senate conviction on impeachment charges in February 2021 had this insider account of the president’s conduct been available. (The answer is unclear, since many Republicans, including Senate Minority Leader Mitch McConnell, took the position that impeachment had become an unconstitutional remedy the day Trump left office.) But even at this late date, it matters that we have learned that the standard MAGA account of Trump as an innocent bystander of the January 6 violence is nearly as big a lie as the stolen-election fable that underlay the whole effort to reverse the 2020 presidential election results.

Because the people who most need to hear this testimony (and all the other revelations the January 6 committee has produced) probably won’t, it may have a limited impact on Trump’s power base within the MAGA movement and the GOP. But listeners did include the Justice Department lawyers who will soon have to decide if criminal indictments of the ex-president and his cronies are in order. While I still don’t know that we will ever see Trump in leg-irons, he’s now as in need of a pardon as the staffers, advisers, and members of Congress who sought one from him before he left office.

Already, media types are comparing Hutchinson to John Dean, the White House counsel who flipped on Richard Nixon and provided a lot of the evidence that sent a host of Nixon aides to the hoosegow and led to Nixon’s resignation before he could be impeached. In some respects, this doesn’t make sense, as Hutchinson has not (as far as we can tell) incriminated herself. But, like Dean, she has helped take a chaotic series of events and knit them together into a made-for-TV account of an out-of-control president going beyond the gates of delirium in a fight to hang onto power. And even more than Dean, Hutchinson comes across as a faithful presidential supporter and Republican professional who worked for The Boss until the moment that even she was shocked by his evil and irresponsible conduct. Her portrait of Trump on January 6 won’t fade with time.