US labor law is designed to prevent railroad strikes like the kind that shook America in the past. But the constant cuts to staffing levels and erosion of conditions for rail workers could produce a national rail walkoff by September. 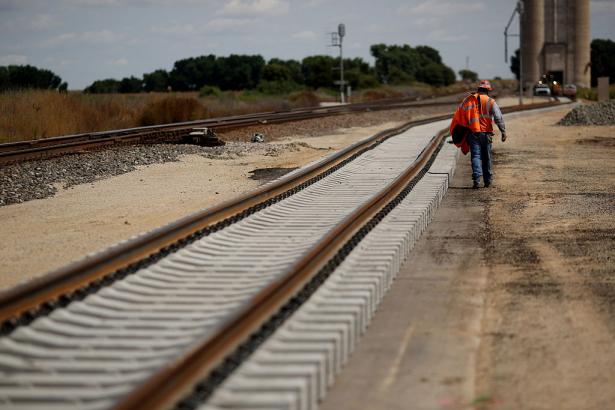 A rail worker walks alongside a segment of newly laid track on a BNSF Railway line.,Luke Sharrett / Bloomberg via Getty Images

After thirty months of stalled contract negotiations amid the pandemic — all while enduring stagnant wages, heavier workloads, unsafe conditions, and draconian attendance policies — 115,000 fed-up US freight railroad workers are mobilizing for a possible national strike.

On Saturday, a few hundred rail workers from multiple craft unions gathered with allies in Galesburg, Illinois, to signal to the federal government and major rail carriers that they are ready for a showdown.

“I have never seen in my experience working in this industry the kind of unity that you all are displaying right now,” Greg Regan, president of the AFL-CIO’s Transportation Trades Department, told the crowd. “This is not just a rail labor fight; this is a labor movement fight.”

Due to the cumbersome bargaining process of the 1926 Railway Labor Act (RLA) — which allowed Joe Biden to intervene last month by appointing a presidential emergency board to make recommendations to try resolving the dispute — the earliest a work stoppage could occur is September.

Although US labor history is replete with militant railroad strikes that have brought the economy to a halt, such actions have become rare in modern times thanks to the legal constraints of the RLA and ongoing division of rail workers into a dozen separate craft unions.

But many of the workers believe a strike could happen this time around. Last month, members of the Teamsters-affiliated Brotherhood of Locomotive Engineers and Trainmen voted to authorize a strike with over 99.5 percent approval. SMART-TD’s general chairpersons have also taken the first step toward authorizing a work stoppage.

All twelve rail unions are currently negotiating in lockstep at the bargaining table to try to maximize their leverage, seeking raises that keep up with inflation, lower health care costs, and expanded paid leave.

“PSR is a marketing thing, not a logistical thing,” said Johnny Walker, a seventeen-year train conductor and SMART-TD member who traveled from Baltimore to attend the Galesburg rally. “There’s no standardization. The PSR metrics are different for BNSF or CSX or Union Pacific, so there’s nothing to go on. It’s like the wolf guarding the henhouse.”

Because of PSR cost cutting, in the past six years, the Class I railroads have collectively lost 29 percent of their workforce, or about forty-five thousand employees, leaving the industry severely understaffed and unable to move freight efficiently.

“I blame the carriers for supply chain disruption and possibly even inflation. Things aren’t getting to market because the railroads aren’t shipping the goods,” said Matt Weaver, an Ohio-based organizer for the BMWED, also a longtime rail worker who attended Saturday’s rally.

While PSR has harmed workers, shippers, and consumers, it has given the rail carriers record profits, with shareholders raking in $183 billion in buybacks and dividends over the last decade.

“My prediction is our rail industry is going to end up like Enron, where they made a whole bunch of money but it wasn’t real,” Walker said. 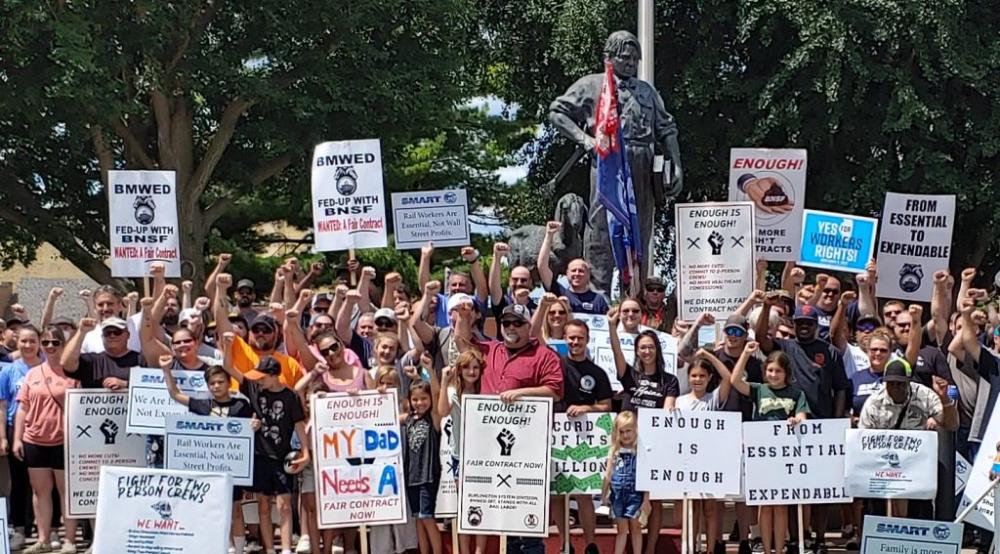 Although railroading has always involved grueling hours and irregular schedules, the industry has traditionally been able to recruit and retain workers by offering relatively good pay and strong retirement benefits. That is no longer the case.

“The word’s out that the railroad’s not the big dog on the block anymore when it comes to employers,” explained Nick Allen, a Galesburg BMWED member who helped organize the rally. “They cut it back so far that now they’re in a hiring frenzy to try to fill jobs that they just can’t fill anymore.”

Remaining workers are forced to clock even longer and less predictable hours through strict attendance policies. “They’re doing more with less. They have to take steps to get us to work more because of their own inefficiencies in hiring the right amount of people,” said Jordan Booth, a SMART-TD member in Galesburg who also helped organize the rally.

Mark McDannald Jr, a Boilermakers member who works at the Galesburg diesel shop, said he has seen nearly sixty of his coworkers leave in the past year due to inadequate paid sick leave and deteriorating working conditions.

“They’re going to different jobs because they’re making better money. The retirement isn’t even keeping them working here. It’s not even worth it,” he said.

“The attrition is terrible,” Weaver said. “When I applied [in 1994], there were six hundred people in the room. Now there’s like three or four.”

Workers say the railroads are using the staffing shortage to try to justify their long-sought goal of reducing freight train crews from at least two workers to only one.

“With the way they’re complaining about how they can’t get enough manpower, more than likely there’s only going to be one person to tie down the train and go walk the train,” Walker said.

Walker noted the danger of having one-person crews, pointing to the 2013 Quebec rail disaster — where the lone engineer on a freight train carrying 2 million gallons of crude oil failed to securely tie down the train, leading to a derailment and explosion that killed forty-seven people and destroyed over thirty buildings in the town of Lac-Mégantic.

Citing such safety concerns, last week, the Department of Transportation’s Federal Railroad Administration proposed a new rule requiring minimum two-person crews, except in “certain low risk operations.” A public comment period on the proposed rule is open from now until September 26, after which a final decision will be made.

A small city in western Illinois, Galesburg has been a key Midwestern railroad hub since the days when antislavery figures like Frederick Douglass, Horace Greeley, and future president Abraham Lincoln rolled into town to give speeches to the local abolitionist citizenry.

Facing exploitation from their distant wealthy employers, as far back as the 1860s, rail workers in Galesburg helped found some of the longest-surviving unions in the country, like the Brotherhood of Locomotive Engineers and Trainmen. Galesburg’s son, poet, journalist, historian, and folk singer Carl Sandburg was himself the child of an immigrant railroad worker. (A statue of the pro-labor Sandburg stood watch over Saturday’s rally in the city’s central park.)

The railroads helped bring manufacturing jobs in the twentieth century, including a massive Maytag appliance factory that, at its height, employed five thousand in good-paying, union jobs. But in a story that played out across the Rust Belt, Maytag shuttered the plant in 2004, and moved production to Mexico.

“That was a big hit to this economy here in Galesburg,” said the BMWED’s Allen. “So the railroad now is even more important. If we lose enough railroad jobs, it would be another huge hit.”

“This is a railroad town. Every single person in Galesburg should be here today,” Peter Schwartzman, the city’s recently elected Green Party mayor, said at the rally. “If this railroad system doesn’t work, that’s one big domino that’s going to affect everybody else’s lives in this area.”

Another supporter who came from out of town was Dylan Parker, Fifth Ward alderperson for nearby Rock Island, Illinois.

“It’s the same story everywhere: corporate America trying to screw over workers to up their profits,” said Parker, who is also cochair of the Quad Cities DSA labor committee. “It’s the same story it’s always been, whether now or 150 years ago, when these unions first organized.”