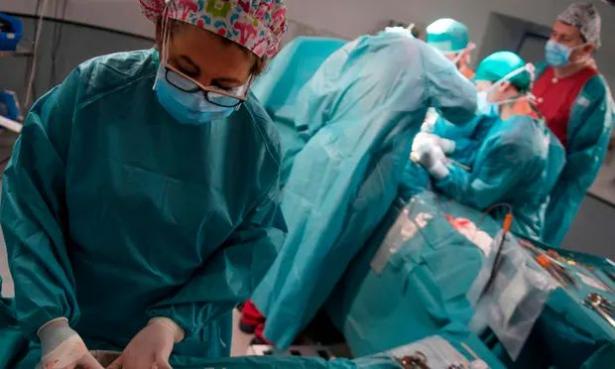 An assistant preparing a kidney for a renal transplantation at La Paz hospital in Madrid. The findings point to ways to improve organ transplantation rates. ,Pierre-Philippe Marcou/AFP/Getty Images

Once the heart stops pumping blood, death quickly follows. Or does it?

Scientists have developed a way to restore function in pig organs an hour after their hearts have stopped beating, raising fresh questions about the nature of death and pointing to ways to improve organ transplantation rates.

For decades, scientists had assumed that a flatlining heart, and the deficit of oxygen and nutrients that it brings, triggers a cascade of events leading to irreparable cell death and damage to vital organs.

But in 2019, Prof Nenad Sestan at Yale University and his colleagues announced a technique to restore some degree of function to cells in pig brains up to six hours after death, by pumping a form of synthetic blood called cryoprotective perfusate through their blood vessels.

As well as delivering oxygen and nutrients, it contained drugs and other substances to protect cells against injury and prevent blood clots. Even though the pigs’ brains showed no signs of consciousness, the study provided proof of principal that the irreparable cell damage caused by death, might not be so irreparable.

Now, the same team has achieved a similar feat in other organs. Their updated device, OrganEx, restored circulation and improved the function of cells in the hearts, brains, livers and kidneys of pigs that had died from heart attacks an hour earlier. It also activated programmes involved in cellular repair.

The research, published in Nature, highlights a previously unappreciated capacity of the body to partially recover after disrupted blood flow, the researchers said.

“These cells are functioning hours after they should not be. What [this] tells us is that the demise of cells can be halted and their functionality restored in multiple vital organs, even one hour after death,” said Sestan.

“These results open the door for future transplantation studies and possible treatments for ischemic damage [where blood flow to vital organs is disrupted].”

Currently, the best way to restore oxygen and nutrient delivery to deprived organs and tissues is extracorporeal membrane oxygenation (ECMO), where blood is pumped through a machine that removes carbon dioxide and sends oxygen-filled blood back into the body.

However, when Sestan’s team examined organs from pigs that had undergone ECMO treatment an hour after their hearts stopped beating, they discovered that many of the smaller vessels supplying oxygen to these tissues had collapsed. Organs that had undergone OrganEx treatment appeared to be less damaged, and there were even signs of repair in the kidneys.

“This is a truly remarkable and incredibly significant study. It demonstrates that after death, cells in mammalian organs (including humans) such as the brain do not die for many hours – well into the postmortem period,” said Dr Sam Parnia, associate professor of critical care medicine at New York University Grossman School of Medicine, who was not involved in the research.

“By developing this system of organ preservation, in the near future doctors will be able to provide novel treatments to preserve the organs postmortem. This will enable access to many more organs for transplantation, which will lead to thousands of lives saved every year.”

Further into the future, it might even be possible to support organ function in people who have died, for example as a result of drowning, heart attacks or massive bleeding after a car accident, and bring them back to life hours later, once doctors have repaired the damage, he added.

Sestan’s team cautioned that further animal experiments would be necessary, before tests in human organs could be initiated. Even then, it would likely be many years before a deceased person was ever hooked up to the device.

Linda Geddes is a Bristol-based freelance journalist writing about biology, medicine and technology. Born in Cambridge, she graduated from Liverpool University with a first-class degree in Cell Biology. She spent nine years at New Scientist magazine working as a news editor, features editor and reporter, and remains a consultant to the magazine. Linda has received numerous awards for her journalism, including the Association of British Science Writers’ awards for Best Investigative Journalism. She is married with two young children, Matilda and Max.

The Guardian has a small favour to ask. Tens of millions have placed their trust in the Guardian’s fearless journalism since we started publishing 200 years ago, turning to us in moments of crisis, uncertainty, solidarity and hope. More than 1.5 million supporters, from 180 countries, now power us financially – keeping us open to all, and fiercely independent.