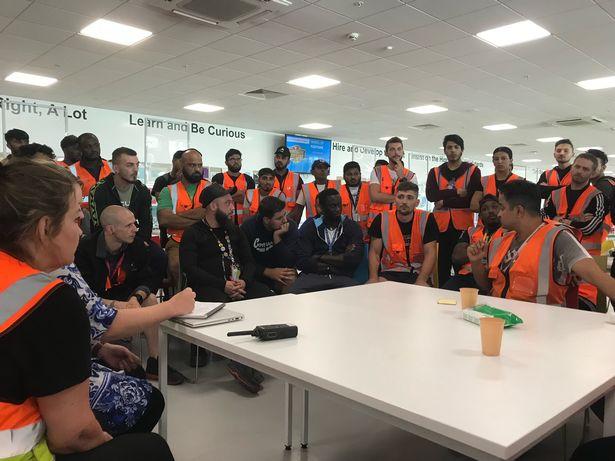 Amazon workers near Coalville, UK talk to management after walking out over a meager pay increase. Credit,LeistershireLive

Over the past few weeks, what started as a complaint a decade ago has become a chorus of fury. Users are tired of Instagram and its parent company Meta copying the features of other apps.

AI and Internet Ethics
By Matt Murphy
The Wire

A YouTuber in the AI community trained an AI language model called “GPT-4chan” to give misogynistic responses to questions. This suggests that many people will be able to use and expand on this AI that espouses hate speech – and that got the attention of the AI ethics community.

Sanctions and embargoes are precarious policy tools that can lead to inadvertent consequences without careful targeting, planning and coordination. In the absence of focussed application, Washington’s attempts to break China’s 5G dominance may have helped Beijing to strengthen its grip on the sector.

Trump to Sue CNN: “What Big Lie?”
By Jeremy Bailey
The Wrap

His lawyers insist in a letter to the network that he simply believes it. As far-fetched as it may seem, the threat comes less than a month after two Supreme Court Justices raised the stakes when they made it known they want to reconsider the First Amendment precedent that set actual malice as the libel standard for public figures.

Amazon Workers in the UK Walk Out
By Morgan Meaker
Wired

Frustration at a 3 percent pay increase drove a crowd of employees to stop work and protest in the warehouse’s cafeteria. The union GMB, which represents some Amazon employees in the UK, estimated that between 700 and 1,000 people took part and said that protests in Tilbury continued the next day, when workers at warehouses in Coventry and Bristol also walked off the job.

Streaming Royalties: Rashida to the Rescue
By Brian Heater
TechCrunch

Michigan Rep. Rashida Tlaib is putting together a resolution aimed at establishing a royalty program to provide musicians adequate compensation via royalties on per-stream basis. Tlaib says her team worked closely with the Union of Musicians and Allied Workers on penning a draft of the resolution.

Reports have surfaced about the removal of information about abortion from social media. Unfortunately, none of it is unprecedented. Platforms like Facebook and Instagram have long maintained broad and vague community standards that allow them to remove content with little recourse.

BP has spent more than £800,000 on social media influence ads in the UK this year that champion the company’s investments in green energy. The company paid about £570,000 to Facebook and Instagram for influence ads that reached tens of millions of viewers in the UK.