Brazilians prepare for a momentous vote 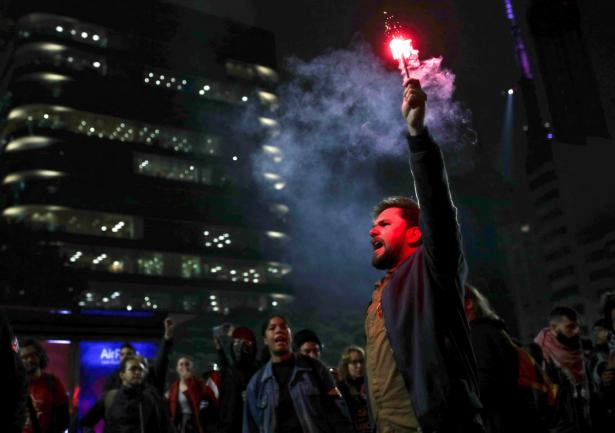 A demonstrator holds a flare during a protest for democracy and free elections and against Brazil's President Jair Bolsonaro, in Sao Paulo, Brazil, August 11, 2022. Credit,Amanda Perobelli/REUTERS

Indigenous peoples everywhere, from Asia across to Africa and Latin America, are constantly battling to defend their cultures, their territories and, above all, their rights. Also targets of racism, Indigenous peoples are proudly reclaiming their culture through one of the most universal means of communication, music.

Protests—some of them massive—in defense of democracy and education and against far-right President Jair Bolsonaro's coup-mongering were held in cities across Brazil. Many of the protests featured readings of a pair of pro-democracy manifestos, including the “Letter to Brazilians in Defense of Democracy and Rule of Law.”

As the historical significance of the invasion sank in and public opinion consolidated the overwhelming sympathy for Ukraine with concern over Swedish security, many, especially on the radical left, found themselves faced with a reality which their ideological lethargy of the past decade had ill-prepared them for.

Hundreds of people, angry at the rising cost of living, protested on Wednesday in the capital Freetown and in the north. Demonstrations soon turned violent with some calling for President Julius Maada Bio to resign. The president says the unrest is “terrorism”, instigated by Sierra Leoneans living abroad.

More than 100,000 people have pledged to cancel their direct debit payments for gas and electricity from October in protest against rocketing energy prices, but charities are warning that such actions could push people into dangerous levels of debt. Five people share their views on the Don’t Pay UK campaign, which launched in June, and explain why they will join the protest, or not.

“Our book is an attempt at articulating a new Palestinian political discourse,” said Ramzy Baroud, co-editor of “Our Vision for Liberation: Engaged Palestinian Leaders & Intellectuals Speak Out.” The book has brought together 27 scholars from varied backgrounds to provide a fresh direction to the Palestinian struggle.