White-Out at the White House 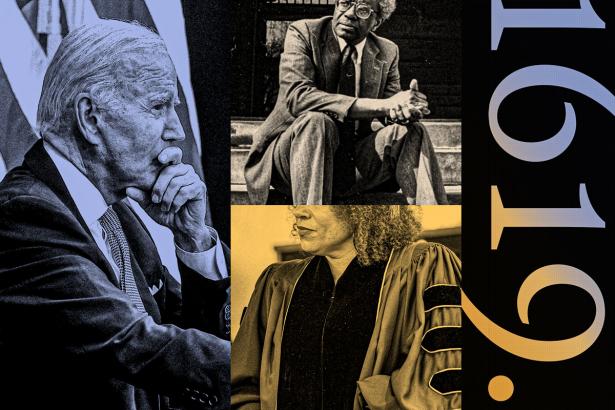 Illustration by The Forum

Democracy in America, already partial and imperfect, is in a moment of existential crisis. One of our two main political parties, the Republicans, has been taken over by a fascist social and political movement. The GOP in its current incarnation is a cult of the leader, former President Donald Trump, who has risen to power on the basis of his initial reaction to the first Black president, and the fears that white Christian Americans would be displaced culturally, politically, and numerically by Black equality and immigration. This movement is made up of a set of disparate but related factions—QAnon conspiracy theorists, white nationalists, Christian nationalists, evangelicals, fascist militia movements, fossil fuel companies, and billionaires who see an opportune moment to destroy the fabric of civil society that keeps their actions constrained.

On the national level, GOP leaders are attacking public education. They have focused particularly on teaching that squarely addresses America’s history of disenfranchising Black voters at the polls, robbing them of wealth, and using prisons and police to enforce a system of majority white rule in the interests of the wealthy.

When Americans do not learn of this history, our leaders will be free to repeat it. When Americans do not learn of the causes of structural racism, they will be befuddled by mass protest movements to address it. GOP leaders are also attacking women’s and LGBTQ+  rights, instituting strict bans on abortions, and bringing a version of Russia’s 2013 “gay propaganda law” to the United States, forbidding the normalization of same-sex relationships to minors and criminalizing trans identity. It is a moment of emergency, and the future of American democracy requires our leaders to understand this.

This is the broad backdrop to a recent meeting that convened historians and social thinkers at the White House, to advise President Joe Biden on the democracy crisis facing the country, and on the best measures for the Democratic party—the default protector of our multiracial democracy—to face down the authoritarian menace on the right. This convocation suffered from a glaring omission, however: none of the people who met to consult with President Biden were Black American journalists, activists, or intellectuals. Black Americans have been on the forefront of America’s anti-fascist struggle. To exclude everyone from this group as thinkers who are essentially less-than worthy of advising on the topic is a breathtakingly unacceptable misunderstanding of the threat.

Black Americans have relentlessly warned of the ways in which an American version of fascism may one day prevail—as today’s white-nationalist right has itself recognized in stoking moral panics and book and curricular bans targeting critical race theory (CRT). The intellectual framework of CRT, mainly developed by Kimberlé Williams Crenshaw and Derrick Bell, focuses on why, after the gains won by the civil rights movement, legal and institutional barriers to achieving multi-racial democracy remained. CRT centrally includes Derrick Bell’s concept of interest convergence—the dynamic whereby parties with distinct interests join together, not because of natural affinity, but because as a conjoined group they have a better opportunity of realizing their diverse interests together. Interest convergence helps to lay bare the structure of the fascist social and political movement we see in the United States today. It explains why Christian nationalists, white nationalists, patriarchal forces, and the billionaire class would come together in a social and political movement against democracy.

Liberal democracy is based on two values, freedom and equality. These values give minorities of whatever stripe—racial, religious, and sexual—the right to live in a society that recognizes their ways of living and their history as legitimate parts of the total body politic, including an education that reflects this diverse plurality. Liberal democracy ensures that workers can stand up for their interests against business owners. Any group that is threatened by a less powerful group exercising their rights is threatened by liberal democracy’s values, which are designed to preserve the capacity to “speak truth to power.” Liberal democracy gives minorities protections against domination by the powerful—be they the numerically dominant or the wealthy elite. It is a system that imperils, in the United States, full domination by groups such as the billionaire class, white Americans, Christian Americans, men, and heterosexual patriarchy.

As Nikole Hannah-Jones’s 1619 Project—another intellectual endeavor under unceasing attack from the forces of the Trumpian right—has made clear to all, in the face of these obstacles, Black Americans have been at the forefront of America’s pursuit of the realization of our democratic ideals. Hannah-Jones ably lays out the centrality of white supremacy as an obstacle to the realization of American democracy. Her work also clearly delineates the central role of Black political protest in fighting America’s native brand of fascism. Hannah-Jones’s groundbreaking project overlapped with the Black Lives Matter Movement, the largest movement for Black equality in recent decades. As a result, the American right has ferociously targeted it. The 1619 Project book is perhaps the first book in our nation’s history to be subject to multiple state laws that ban it specifically from curricula.

The racial limitations of Biden’s handpicked group of White House advisers become clearer still when we consider the thinkers who did make the cut: Jon Meacham, Anne Applebaum, Sean Wilentz, Allida Black, and Michael Beschloss. The choice of this particular group to advise Biden is an indication that this administration is not up to the task of facing the antidemocratic crisis at hand.

Here are two things that stand out about this contingent of thinkers. First, with the exception of Applebaum, none of them was in the initial group of academics, scholars, and activists who raised the alarm, as Trumpism was gaining traction, that the United States potentially faced a fascist social and political movement.

Worse still, Sean Wilentz’s most salient recent foray into political debate has been to lead a very public campaign against Hannah-Jones’s 1619 Project. Wilentz’s intervention bore little academic fruit. It did, however, lend unwarranted credence to the right’s attack on Hannah-Jones and her work.

The fact that these scholars are, for the most part, such late-comers to the threat is a worrying sign about their vision and understanding of social and political reality. But the white-centered scholarship of this all-white panel is nothing less than a red flag, given the deeply racial character of the right-wing assault on our democracy.

This is more than just an academic complaint. Fascist political tactics inevitably borrow from a nation’s particular history—as we see in the case of fascist Russia, Putin’s regime is reviving its past practices in its brutality towards Ukrainians, including detainee camps reminiscent of the Gulag. A Ukrainian perspective is essential to understanding Russian history toward Ukraine. The same is true of our own fascist history of Jim Crow—and, more recently, the criminal legal system responsible for the world’s largest prison population, which would also be responsible for enforcing a U.S. authoritarian takeover.

Lest one think that these scholars are simply better than any Black American intellectuals who might consult the president on the current situation, let me provide two examples of Black American intellectuals, just from the institution where I teach, who would be furnish indispensable knowledge of these topics—at a level almost certainly not reached by the group tapped to advise Biden.

In her latest book, America on Fire, Yale historian Elizabeth Hinton discusses “The Cycle”—namely,  a structure of white backlash aimed at discrediting and disempowering Black political protest. Hinton documents that the cycle repeats itself on the local and national level countless times. Her work makes it clear that the strength of the fascist social and political movement we face is based on white reaction to the Black Lives Matter movement.

One particularly powerful and toxic rallying point of today’s white backlash politics is what’s known as the Great Replacement Theory. Indeed, the fear that a majority will be replaced culturally, politically, or physically, is at the very heart of the logic of fascism. Jennifer Richeson, a social psychologist at Yale, has done extensive research on this topic. In 2014, Richeson, along with Maureen Craig, showed that priming white Americans with the claim that in 2042 America will be a “majority minority” country made them much more right wing, along many dimensions. In other words, already in 2014, Richeson understood the fascist political tactic that has come to dominate the Republican party.

If the members of the Biden White House are serious about addressing the challenges we face, they must engage with more considered and in-depth work that centers the racial crisis at the very foundation of the democracy crisis. And this means drawing on the deep wealth of knowledge and insight about American fascism at the heart of the Black American intellectual tradition.

Jason Stanley is Professor of Philosophy at Yale University. His latest book is How Fascism Works: The Politics of Us and Them.

The Forum is a source of daily news and commentary deploying the insights of critical race theory, and supplying the materials and organizing strategies to re-envision American democracy from the ground up.

We need The Forum to fill in the gaping blindspots of a broken media ecosystem—to center the urgent demands of racial justice and democracy in the public discourse that shapes the most fundamental perceptions of what our government is for and who it serves.

The Forum will meet this need with daily content stressing the grassroots mandates of democratic reform in our multiracial society; it will not treat politics as the sport of elite insiders or as fodder for culture-war clickbait, but rather as the urgent business before us all as Americans seeking to redeem the battered promise of expansive, truly democratic self-rule and solidarity in an age of racialized resentment and neoliberal division.